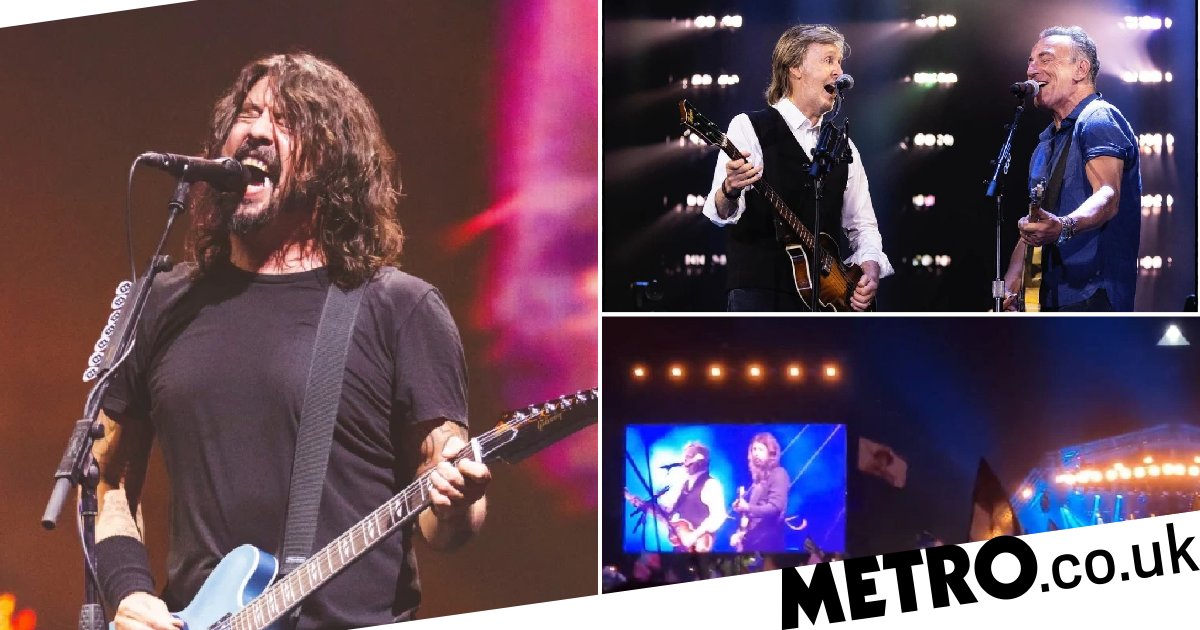 Sir Paul McCartney treated the Glastonbury audience tonight with not just one, but two surprise appearances.

First, Sir Paul brought out Foo Fighters frontman Dave Grohl to sing the Beatles classic I Saw Her Standing There, in his first public appearance since the musician suffered the loss of his band’s beloved drummer, Taylor Hawkins.

As if that wasn’t enough, the legendary Bruce Springsteen joined shortly after too, as the pair proceeded to play Glory Days.

For the first special surprise performance, Sir Paul said: ‘I’ve got a little surprise for you. My friend from the west coast of America, Dave Grohl.’

However, the Foo Fighters frontman explained that it had not been a smooth journey.

The pair played a medley of songs including Band On The Run, and straight after Sir Paul thanked his special guest, he introduced another to the Glastonbury stage.

He said: ‘Love you Dave thank you man we all love ya. Ladies and gentlemen one more time – Dave Grohl.’

Sir Paul continued: ‘He said you know he’ll come over and I didn’t believe him but I should have, he showed up.

‘We have another surprise for you from the east coast of America, it’s Mr Bruce Springsteen.’

Taking to the stage, Bruce said: ‘Happy birthday Paul, here’s to 80 more years,’ before Bruce thanked Sir Paul for inviting him to play, to which the Beatles legend responded: ‘You’re kidding, thank you for coming.

‘These two guys flew in especially for this tonight.’

Bruce added: ‘Couldn’t miss it man,’ before the pair played Beatles classic I Wanna Be Your Man.

Fans were of course delighted with the surprise appearances, with one taking to Twitter to write: ‘He’s done it folks, he’s won #Glastonbury.’

Another penned: ‘Dave Grohl is on with Paul McCartney, the cherry on top of the cake, I can’t believe it!’ while a third commented: ‘This is incredible!!!! Grohl and now Springsteen! What?! This is some 80th birthday party Paul McCartney is throwing on!’

Earlier in the evening, Sir Paul included another surprise to his audience, as he played a black-and-white video featuring Johnny Depp in the background of his 2012 track My Valentine.

Natalie Portman and Pirates of the Caribbean star Depp both starred in the black-and-white music video, using their own version of sign language (which was criticised at the time of its release) to interpret the lyrics.

Depp, 59, who is a musician as well as an actor, also played guitar in his version of the song.


MORE : Sir Elton John dedicates song to George Michael at BST Hyde Park day before late singer’s birthday: ‘I love you and I miss you’

Fresh protests across the US as new abortion reality takes shape