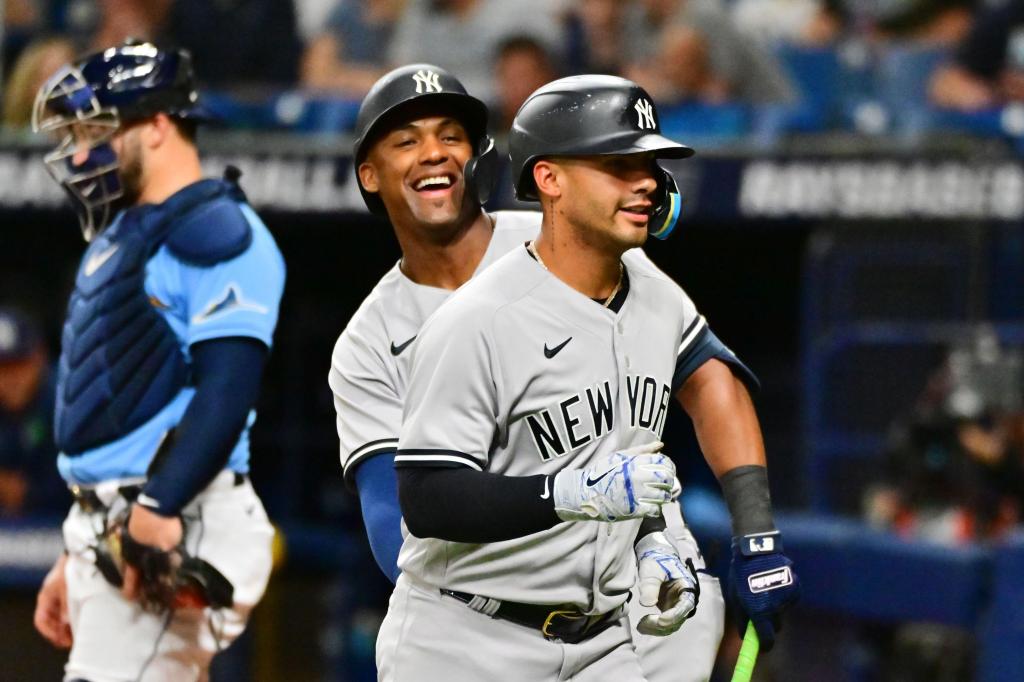 ST. PETERSBURG —  Jameson Taillon isn’t about going out and proving anybody wrong. He’s here to prove the Yankees right. The right-hander is about showing the Yankees decision-makers that believing in him and the other starters when others doubted them was the right decision.

Friday night, he showed that by throwing eight scoreless innings, combining with Clay Holmes to  shutout the Rays 2-0 at Tropicana Field.

After a winter full of questions about the Yankees rotation, they have been dominant. Taillon has been one of the biggest answers.

“I guess we could be proving  some people wrong and we might be proving  the Yankees right for believing in us,” Taillon said. “So it’s been fun to be a part of, I mean, I love tonight coming off the field having the whole rotation there to greet me and talk about my outing and stuff. I mean, it’s a tight-knit group. We watch each other’s bullpens, we play catch together, we’re always talking about our plans and scouting reports and stuff.

The Yankees (33-13) have won four straight and have had starters throw eight innings on back-to-back nights. They guaranteed at least a split of this four-game series in the first meeting with their American League East rival Rays. They have won 11 of 14 series this season so far. They maintained the best record in baseball with their sixth shutout of the season.

Gleyber Torres and Matt Carpenter each had solo home runs in the sixth inning to give the Yankees their offense. It was Torres’ eighth of the season, he had nine total last year, and the first for Carpenter, who just signed with the Yankees on Thursday.

It was only the second time this season the Rays had been shut out.

Taillon held the Rays to two hits. It was his first scoreless start of the season. He struck out five and did not walk a batter. It was the fourth time this season Taillon did not issue a base on balls and the first time in his last four starts. Taillon had great fastball command Friday, getting five swing-and-misses on the four-seamer and six called strikes.

Taillon, who had offseason ankle surgery, was one of the question marks the Yankees rotation had this winter. So too was Luis Severino, who had pitched just over 27 innings in the last three years because of injuries. Nestor Cortes, who has the lowest ERA among the rotation, wasn’t even considered a lock to be a starter. After Friday night’s game, the Yankees rotation had an American League best ERA of 2.78.

“I think they’ve been the best group to this point in the league. I caution that it’s still  early and we got to keep doing it, but I’m not surprised that they’re going out and pitching as well as they are. I know what they’re all capable of,” Yankees manager Aaron Boone said. “I know how prepared they all are, I know how together they all are and it’s good to see them taking pride in their day and in being the next guy to really step up.

“But I’m not surprised at any of their success.”

It was the fourth time this season the Yankees have had a starter go eight innings.

That’s a huge help to a bullpen that has been hit by injuries — losing Chad Green (Tommy John surgery), Jonathan Loaisiga (shoulder) and Aroldis Chapman (Achilles) in the last week. It has been a point of emphasis for the starters this week.

Friday night, Clay Holmes, who like Taillon came over from the Pirates,  closed it out Friday picking up his sixth career save.

“You see what those guys like when we can give them a couple days off, they’re all going to be sharper. So our goal at this point in the season is definitely to keep those guys fresh, because we’re gonna need them down the stretch a bunch obviously,” Taillon said. “I mean it’s pretty cool for me to throw eight and have Clay Holmes close it out. We both rehabbed our Tommy John’s together and stuff. So for us to be here in this situation, pitching together in a game is pretty cool.”

Six unanswered questions about the Uvalde shooting and investigation in Texas