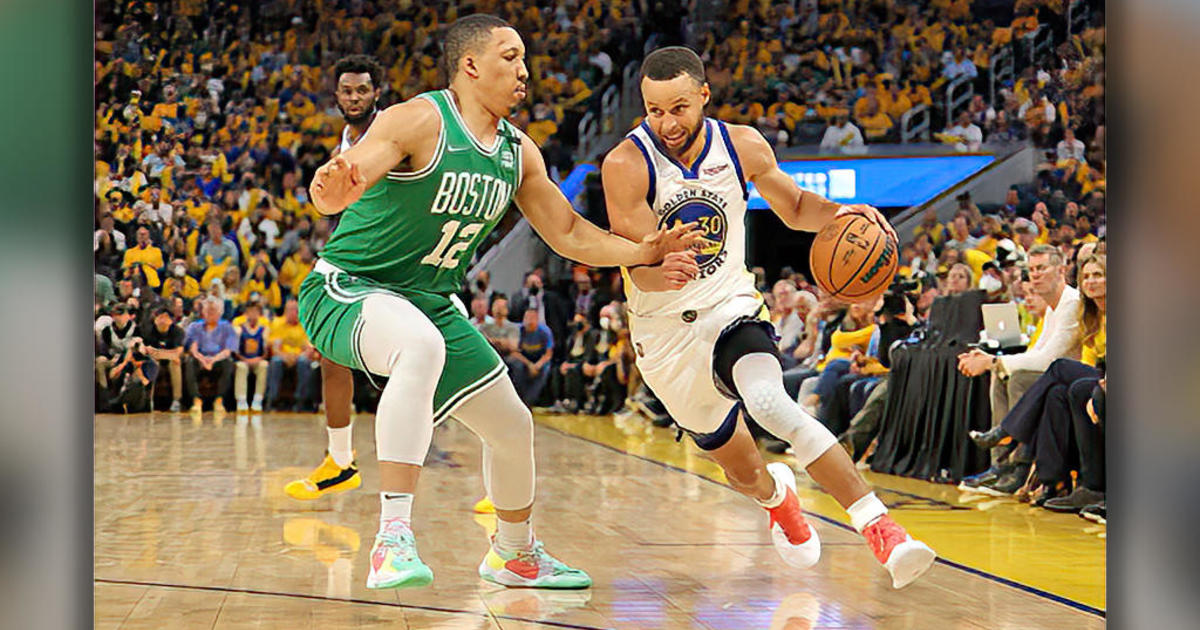 SAN FRANCISCO (CBS SF/AP) — Stephen Curry scored 29 points, Jordan Poole added 17 and the Golden State defense forced 19 turnovers Sunday night on the way to a 107-88 rout of the Boston Celtics in Game 2 of the NBA Finals.

The win knotted up the best-of-seven series at a game apiece with the action now moving to Boston for Game 3 on Wednesday night.

“I thought everybody was more engaged,” Warriors coach Steve Kerr said after his team improved to 5-0 after a loss in these playoffs. “It’s pretty obvious. Just our level of force and physicality was ramped up quite a bit, and it had to be.”

After struggling to find his touch, Poole hit a pair of deep threes, including a buzzer beater from nearly half court, to give the Warriors a 87-64 lead heading into the fourth quarter.

As they have all season, Golden State took control of the game in the third quarter, outscoring Boston 35-14 and to make sure there would be no fourth quarter rally on Sunday night, the Warriors opened the final stanza on a 6-0 run.

On the night, the Warriors scored 33 points off the 19 turnovers.

“We have to take better care of the ball,” Jason Tatum said.

Just like in Game 1, a huge run decided everything. The Celtics went on a 48-18 run in the second half to decide the opener; the Warriors didn’t wait that long in Game 2, going on a 43-14 burst from late in the first half until early in the fourth quarter to turn a tie game into an absolute runaway.

“We said we needed to play with desperation,” Curry said. “That’s what we did.”

With 9:47 left in the game and the Warriors up an insurmountable 93-66, Boston head coach Ime Udoka pulled most of his starters. Al Horford and Marcus Smart who scored a combined 44 points in the Game 1 win, accounted for just 4 on Sunday night.

Behind  Curry’s 15 points and taking advantage of Boston’s 11 first half turnovers, the Warriors were able to escape with a 52-50 halftime lead.

As he has the entire playoffs, Klay Thompson struggled hitting on just 1-of-8 shots and missing all four of his shots from deep in the first half.

Meanwhile, the Celtics potent twosome of Jaylen Brown and Tatum challenged Golden State’s defense in the seesaw first half. Brown had 15 points in the half while Tatum bounced back from sub-par shooting Game 1 to add 21 points.

But Tatum would then just score 7 points in the second half. Brown also struggled, scoring just 2.

All is not lost for Boston, of course. The Celtics need to only win their remaining home games to win the title, though that won’t be an easy task against a Warriors team that has won at least one road game in an NBA-record 26 consecutive playoff series.

Boston fell to 8-3 on the road in these playoffs. They remain tied for the second-most road wins in a single postseason; the record is nine, set by Houston in 1995.

Players and coaches from both teams wore orange T-shirts before the game bearing the words “End Gun Violence” on the front, a topic that  Kerr — whose father was killed in an act of gun violence 38 years ago — has spoken out on often.

“It comes down to convincing politicians that things like background checks are really crucial, and things that don’t impact people’s Second Amendment rights,” Kerr said.