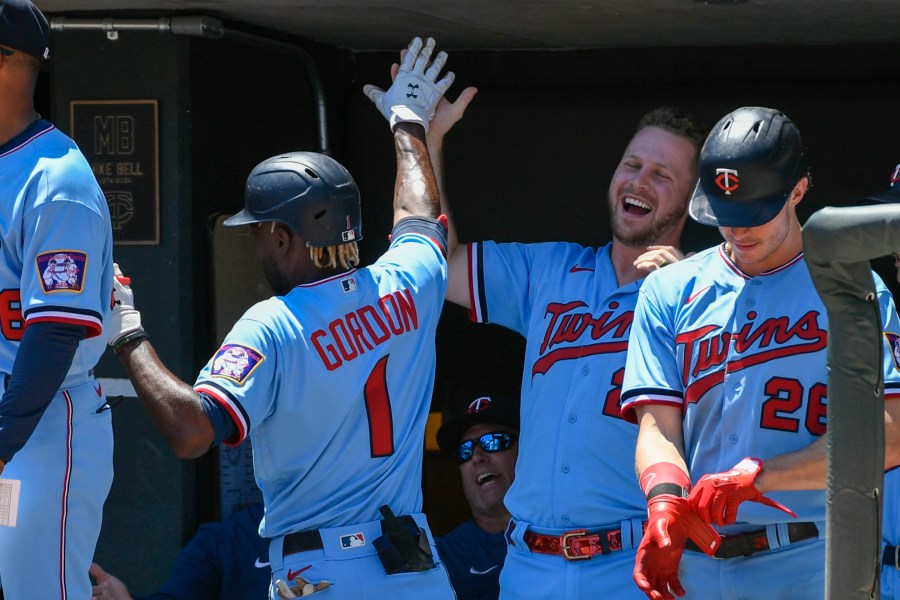 MINNEAPOLIS (AP) — Nick Gordon hit a third-inning home run that stood up for Minnesota starter Devin Smeltzer, and the Twins dodged a sweep, cooling off the Cleveland Guardians with a 1-0 win on Thursday.

Gordon, subbing for star Byron Buxton in center field, drove a 1-2 curveball from Zach Plesac (3-4) into the grass berm beyond the wall in center.

The Guardians failed to score against Minnesota’s struggling bullpen after loading the bases with no outs in the seventh inning, getting a man to second base with one out in the eighth and putting a runner on second with one out in the ninth. Caleb Thielbar recorded his first save by striking out pinch-hitter Steven Kwan to end the game.

Cleveland lost for just the fifth time in its last 22 games. The Guardians (36-29) lead by percentage points in the AL Central race, having played six fewer games than the Twins (39-32). The two teams have a five-game series next week.

After blowing a 10-7 ninth-inning lead in an 11-10 loss on Wednesday and squandering a 5-3 eighth-inning edge in a 6-5 defeat on Tuesday, the Twins badly needed a pick-me-up from Smeltzer (4-1). The left-hander cruised through six innings, allowing only two singles and one double while striking out three.

The Twins had Buxton on the bench for the second straight game because of soreness and swelling in his right knee that has bothered him all season, his first consecutive absences in two months. Manager Rocco Baldelli said the team is not currently considering an injured list stint to help Buxton’s chronic case of patellar tendinitis.

“Is it worse at this point than it has been earlier in the year? I’d say that’s accurate. I’d say that’s true. But we’re still going to continue to treat it day to day,” Baldelli said.

Guardians: RHP Yohan Ramirez, who was acquired in a trade last month with Seattle, joined his new club for the first time after eight scoreless innings with Triple-A Columbus. RHP Anthony Castro was sent down after allowing four seventh-inning runs on Wednesday night, as the recently instituted 13-pitcher roster maximum continues to trigger more league-wide transactions.

Twins: Rookie RHP Josh Winder (shoulder impingement) was returned from his rehab assignment and sent to Triple-A St. Paul, with the pitcher limit making it unfeasible to carry six starters. He’s in line for a 27th-man call-up to start during Tuesday’s doubleheader at Cleveland.

Guardians: RHP Cal Quantrill (4-4, 3.77 ERA) pitches the opener of a three-game series against Boston on Friday night. He has logged six-plus innings in six of his last seven turns. RHP Nick Pivetta (7-5, 3.31) starts for the Red Sox.

Twins: RHP Dylan Bundy (4-3, 5.17) takes the mound to begin a three-game against Colorado on Friday night, coming off his best start of the season with one run allowed over eight innings at Arizona last week. RHP Germán Márquez (3-5, 6.16) pitches for the Rockies.