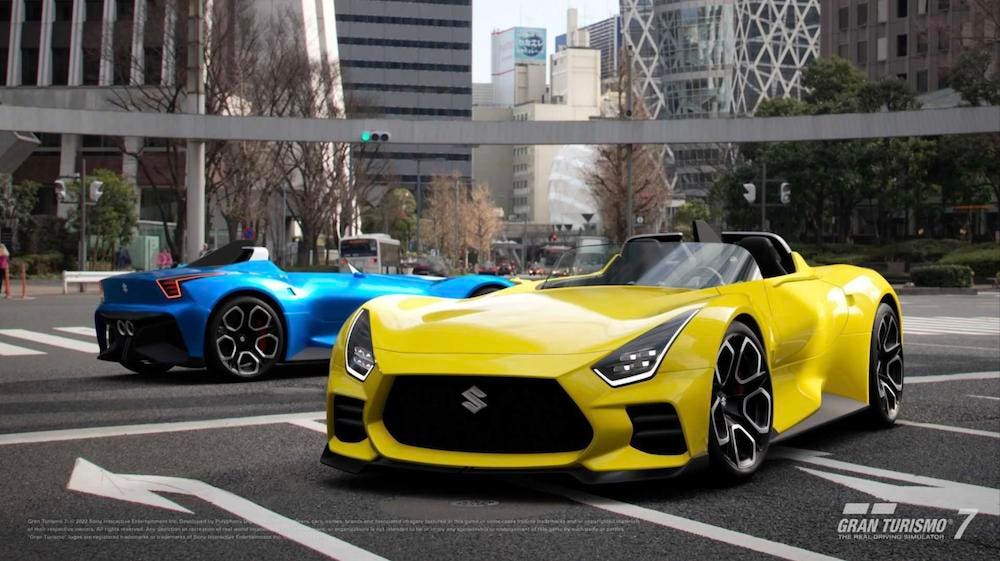 Since the groundbreaking developer Polyphony Digital, maker of Gran Turismo, starting launching the virtual cars back in 2013, we have seen breathtaking virtual designs from the likes of Mercedes Benz, BMW, Volkswagen, Nissan, Toyota, Subaru, Lamborghini, Hyundai, Bugatti, McLaren, Mazda, Jaguar, Porsche, Honda and Audi, to name a few. The cars were met with critical acclaim in industry circles for their novel approach to aesthetics and powertrains, with real-life one-offs appearing at motor shows in Japan, Germany, U.S. and England.

For the most part, these cars apply present-day technology and materials, with two notable exceptions that utilize experimental propulsion and aerodynamic technologies.

And now, we have a Suzuki Vision Gran Turismo to add to the pack.

Last week, Polyphony Digital released an update for its recently released Gran Turismo 7 with one of the highlights being the never-before-seen Suzuki VGT. As a completely digital version that embodies the very best technologies from the Japanese manufacturer, the Suzuki VGT is a two-seat roadster powered by the 1,340-cc inline-4 engine from the brand’s legendary Hayabusa superbike. The GSX1300R Hayabusa once held the record for the world’s fastest production motorcycle with a top speed of 194-mph.

The latest 1340cc Hayabusa engine on the VGT concept is married to a hybrid system consisting of three electric motors, two driving the front wheels and one propelling the rear, a 4WD combination screams to 9700-rpm and pumps out 426-hp and 450 lb-ft of torque. Tipping the scales at just 2,138 pounds, this Suzuki weighs far less than a Mazda MX-5.

Suzuki tells us that the VGT-s styling was inspired partly by the current model Swift Sport and partly by the 660cc turbocharged Cappuccino lei sports car of the early 1990s. Boasting an aggressive sporty face with a huge open grille and upslanted headlights, the tail end gets a stylish carbon-fiber diffuser with large dual exhaust tips. The VGT is topless and boasts a a sporty open look with integrated roll hoops and a centrally located fin. The spartan interior features a yoke-like steering wheel, small screens for its side-view cameras, sporty racing seats and a head-up display.

The only downside is that we will never see the car in production in the real world.