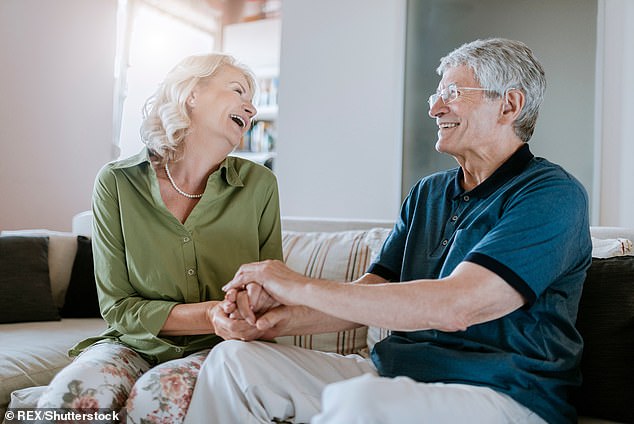 Married people are up to a fifth less likely to suffer an early death than those not in wedlock, a major study suggests.

Researchers looked at the medical records of half a million people in their fifties in Asia over 15 years.

They found being married was associated with a 15 per cent overall lower risk of death from all causes compared to singletons or unmarried people.

And those who tied the knot also had a 20 per cent lower risk of dying from accidents, injuries and heart disease.

Men benefitted most from being married, seeing the biggest drops in mortality rates.

Previous research has also shown men are less likely to take risks, be involved in accidents or consume alcohol and drugs when they are married.

The new study said the ‘protective effect’ of marriage could also be due to partners encouraging their spouse to seek medical help and adhere to treatment.

‘Happy wife, happy life’ has long been touted as the key to a happy marriage. But now a study of more than half a million people in their fifties in Asia has found that tying the knot is also the key to living longer

In the UK, official figures show death rates among single men and women are up to twice as high compared to their married counterparts.

Why is marriage good for your health?

Several studies have suggested marriage is good for people’s health.

In 2010 the World Health Organization found being in wedlock reduced the risk of suffering depression and anxiety compared to people who were single.

It is not clear exactly why marriage helps to keep people healthier, but experts say it could be because someone has another person looking out for them.

Professor Rikke Lund, a public health expert at the University of Copenhagen, said: ‘A number of explanations have been suggested including a healthier life style among the married and faster contact to health services among the married in case of need.’

US experts have also suggested single people are more likely to face loneliness or isolation than married ones.

And men who are not married are more likely to drink alcohol excessively, eat unhealthily and engage in risky behaviours.

They said marriages in East Asia have ‘distinct features’, including being more likely to live with extended family.

The team examined data on 623,140 people, who were aged 54 on average, from the Asia Cohort Consortium — a biobank with health data on 1million people in the continent, as well as their marital status.

The vast majority (86.4 per cent) were married.

Unmarried was defined as people who were single, separated but still married, divorced or widowed.

The results, published in the journal JAMA Network Open,  showed people who were not married were 12 per cent more likely to die from cerebrovascular disease — which includes strokes and aneurysms — than unmarried people.

The mortality rate for coronary heart disease was a fifth (20 per cent) greater.

Unmarried were 17 per cent more likely to die from circulatory system diseases, such as heart attacks, heart disease and heart failure.

And they faced a 19 per cent higher risk of dying from an external causes of death, such as an accident or injury.

A 14 per cent increased risk ofrespiratory diseases, including lung disease and asthma, was also found, as well as a six per cent higher risk of cancer death.

Even people with underlying conditions, such as cancer, diabetes and high blood pressure, were more likely to live for longer if they were married.

The researchers said that although their study found a correlation, it does not prove causation.

They noted several factors that could be playing a role.

People who are poorer and have underlying health conditions may be less likely to be selected for marriage in the first place, for example.

They also said their conclusion may not be down to marriage status itself but living with a spouse.

Earlier studies have found that people have better health if they live with another person compared to those who live alone.

Further analysis also revealed that women saw much less benefit to their mortality if they were married.

The researchers said this could be because domestic labour is unequally divided in Asian marriages and women face more of the childcare burden, which ‘may counteract the health benefits of marriage’.

They also suggested this finding could be down to unmarried women being more likely to have a job and therefore have more money and better health.

Poor Americans are three times more likely to see a doctor if they have Medicare,…

It’s a problem they have – Crystal Palace’s Chris Richards…

Rage Against The Machine Cancel Their 2023 North American…