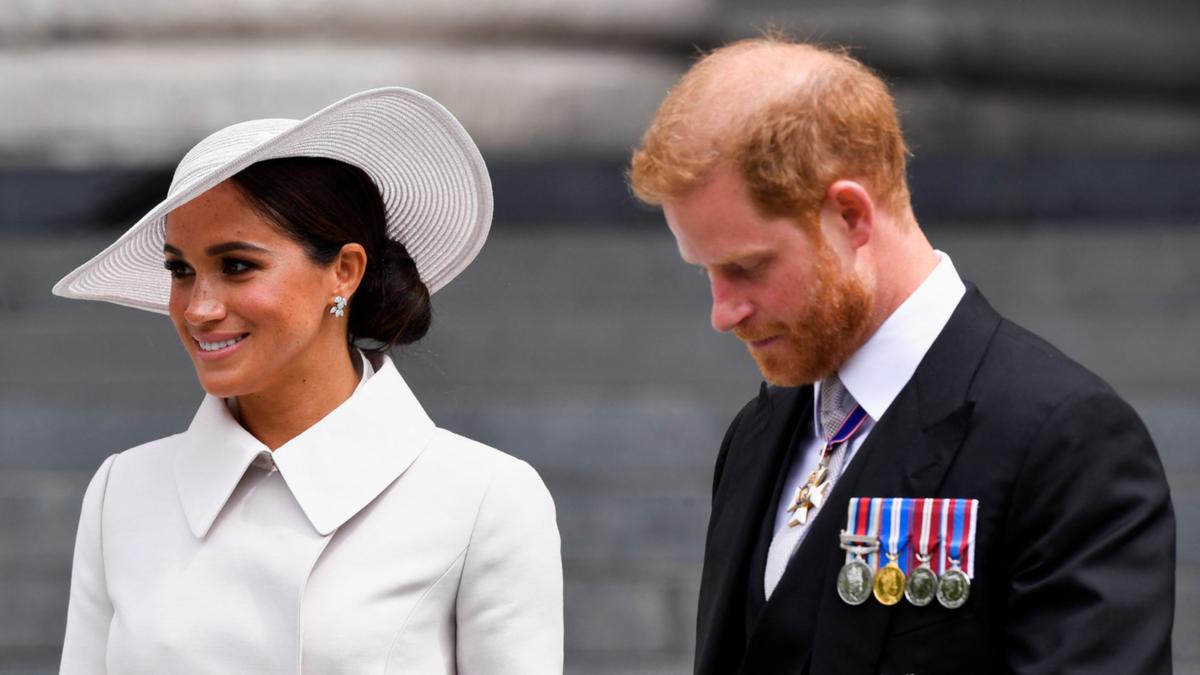 For a moment it was a glimpse of what might have been: Harry and Meghan strolling hand in hand down the aisle of St Paul’s, the eyes of the world on their every step.

However, when they arrived at their allotted places, they turned not to the box office seats at the front but shuffled instead into a second row with the also-rans of the Royal Family.

There they waited, exchanging small talk with Harry’s cousins as the real stars of the show arrived, William and Kate accompanying Prince Charles and the Duchess of Cornwall.

As a piece of theatre, it was compelling. But while this was the public reality of Harry’s slide down the royal pecking order, it was overshadowed by the one thing the watching millions were longing for – a sign, however simple, that two brothers who were once so close they could finish each other’s sentences could patch up their differences. Sadly that sign did not come.

Perhaps a service of national thanksgiving was never going to be the most appropriate venue. But if not then, when?

If sheer physical distance ruled out a handshake, embrace or the briefest of chats, then surely a nod or a smile or even a thumbs-up would not have been impossible. Prince Charles gave ample demonstration of what could be achieved when he blew an affectionate kiss at daughter-in-law Kate.

The tragedy of it all was that separately, and with their wives, Harry and William were radiating goodwill – two Prince Charmings who were charming to everyone, it seemed, but to each other.

It is more than two years since Harry and Meghan’s final outing as frontline royals at a Commonwealth service at Westminster Abbey when the depth of the rift between the princes was startlingly clear – where they were barely able to look at each other, let alone speak.

Since that glacial moment, things have only worsened. From their Oprah Winfrey sit-down to interviews with US TV networks and friendly podcasts, they have launched attack after attack on the royals and the monarchy.

Their incendiary ‘truth bombs’ to Oprah included claims that a senior member of the family was racist, that Buckingham Palace ignored Meghan when she was suicidal during her first pregnancy and that Prince Charles had cut Harry off financially.

Such was the fallout that William was forced to angrily defend the Royal Family publicly against the accusations of racism.

The brothers last saw each other in July for the unveiling of a statue of their mother where their chilliness was hard to disguise – until yesterday.

No one would like to see the return of that brotherly bond of affection more than the Queen, who had hoped that by including the Sussexes in her Platinum Jubilee celebrations there could be a rapprochement.

Nothing would give her greater pleasure than to see this bitterness set aside and her family united once more.

There is, of course, still time – but two days into the Jubilee long weekend and the omens are not good.

On Thursday Harry and Meghan’s studied efforts to avoid the limelight during the Trooping the Colour ceremony, where they were reduced to mere spectators, was perplexing. With William spending most of the day on horseback presiding over Trooping there was no opportunity.

So yesterday the focus shifted to St Paul’s, the cathedral where 41 years ago their parents married and surely a perfect location for a royal reconciliation.

Could the two princes turn the clock back to that time when their mutual reliance had been such an enduring and endearing part of the royal story?

As children, there was a closeness forged out of adversity – the very public breakdown of their parents’ marriage and then the devastation of their mother’s death.

At Eton, William looked out for his homesick younger brother and later, when he wrestled over his doubts about making Kate his wife, it was Harry who was there for him. Both were acutely aware of the importance that Princess Diana placed in them looking out for each other.

So entwined were their lives that when things started going wrong between them, the fallout was all the more unforeseen. No one expected them to live in each other’s pockets for ever; but, equally, no one expected Diana’s boys to take such divergent paths.

Nothing illustrated how the Sussexes’ exile in California has upended their old world than the manner – and timing – of their arrival at St Paul’s.

As non-working royals, they are now very much in the second division. And although spared the indignity of sharing the coach that brought a clutch of minor royals who similarly do not do official duties, such as Princess Michael of Kent’s son Lord Frederick Windsor, they were only just behind them.

This at least allowed them to walk the length of the nave together alone. And, with the eyes of the 2,000-strong congregation on them, it must fleetingly have reminded Meghan of that glorious May day four years ago when they were centre of attention at their Windsor wedding.

This time, however, rather than taking seats at the front of the cathedral they turned left to take their places behind the dutiful Duke and Duchess of Gloucester and between Princess Eugenie’s husband Jack Brooksbank and the Queen’s niece, Lady Sarah Chatto.

It was a painful 19 minutes before William and Kate arrived to take their seats. If the reality of his new life had escaped Prince Harry thus far, it must surely have sunk in then. There was no acknowledgement between brothers, no sign of forgiveness from one nor remorse or indeed apology from the other.

Nothing. Indeed it was hard to escape the conclusion that the gulf between the princes is as deep as it ever was and that nothing has changed.

It is entirely possible of course that the two have met privately or at least spoken. But to end this rift requires a public demonstration, not a private one.

These, remember, are two men who from their childhood were always the most tactile of brothers, hugging or wrestling, high-fiving and fist-bumping.

The very fact that the Sussexes’ movements since their arrival in Britain have been so secretive tells its own story. And how do we explain those events they go to and those they do not?

After yesterday’s service, every single royal made for a reception at the Guildhall, scene of so many historic royal moments. It was here in 1992 the Queen uttered that memorable phrase about the ‘annus horribilis’ and where, in 1997, she paid fulsome tribute to Prince Philip as her ‘strength and stay’ on the occasion of their Golden Wedding anniversary.

Might it play host to another equally important role in the history of the monarchy – a meeting between two warring brothers?

Alas it did not. Harry and Meghan were the only royals not to turn up.