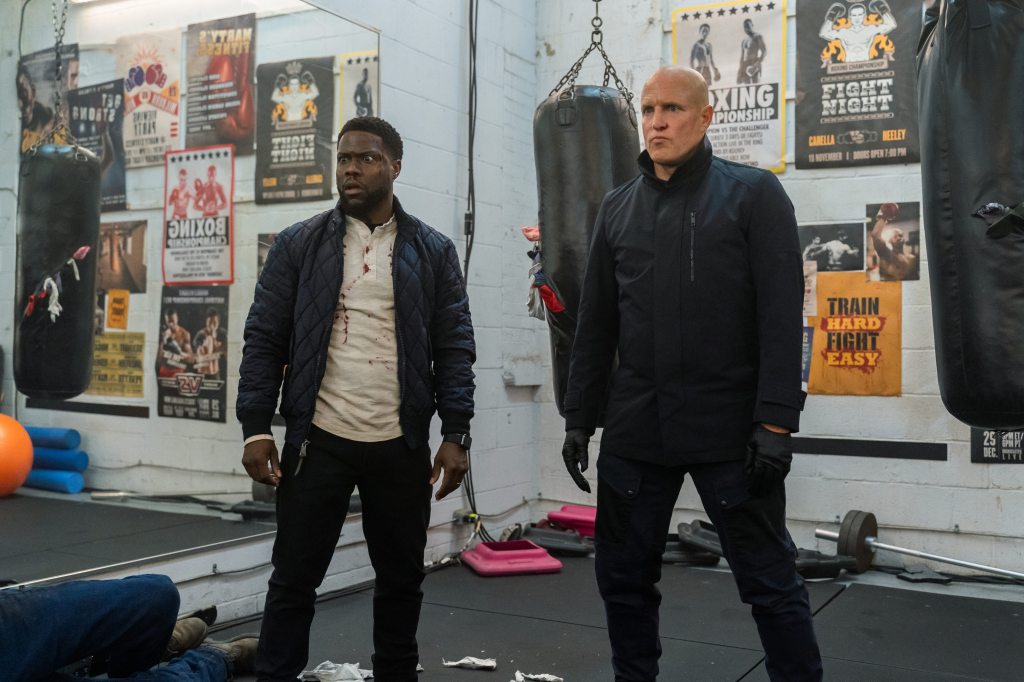 ‘THE MAN FROM TORONTO’

Hart is Teddy, a ne’er-do-well Yorktown, Va., gym employee trying unsuccessfully to make non-contact boxing a thing. His smart and attractive wife Ruth (Jasmine Mathews) is the most understanding person in the world given Teddy’s many shortcomings. Among these are a big credit card debt and a house in dire need of repairs.

Teddy has in fact become a verb. When you “Teddy” something, you mess it up. Teddy still has a hotmail.com account. His password is “password.” When Teddy tries to give his wife a great birthday weekend, he is mistaken for the “man from Toronto” of the title by some bad guys and becomes embroiled in a government plot to capture a South American terrorist planning to destroy the Venezuelan embassy in Washington, D.C.. I know, like what?

As the poetry-quoting man from Toronto, Harrelson’s character is a killer for hire taking orders from an unseen handler and driving a black vintage Charger he has dubbed Debora. The plot of “The Man from Toronto” is the work of screenwriters Robbie Fox (“Grand-Daddy Day Care”) and Chris Bremner (“Bad Boys for Life”). Producer Jason Blumenthal (“Being the Ricardos”) has a story credit.

We meet Teddy as he tries haplessly to film online promotions for non-contact boxing and other workout tips. We meet Harrelson’s character as he tells a tied-up victim the story of the death of his grandfather, whom he saw eaten alive by a grizzly as a child. He also tells the victim how he is going to remove various body parts from him. In exchange for the government paying off his debts, Teddy agrees to continue to allow the bad guys to think he is the man from Toronto, even though he pukes prodigiously when he accidentally cuts a potential victim.

Meanwhile, he and the real man from Toronto develop an unlikely, mismatched friendship, and if you’ve seen “The Hitman’s Bodyguard” films you know where all this is headed. In the role of the unseen handler Ellen Barkin is arguably misused. Hart and Harrelson have a nice chemistry, and they are both gifted comic actors. They make the movie bearable some of the time. Kaley Cuoco has a ridiculously insignificant role as Ruth’s happy-go-lucky girlfriend.

The handler rounds up the man from Miami, the man from Moscow and the man from Tokyo to take care of business in the third act. I hope this doesn’t mean we have a franchise headed our way. Teddy this idea.