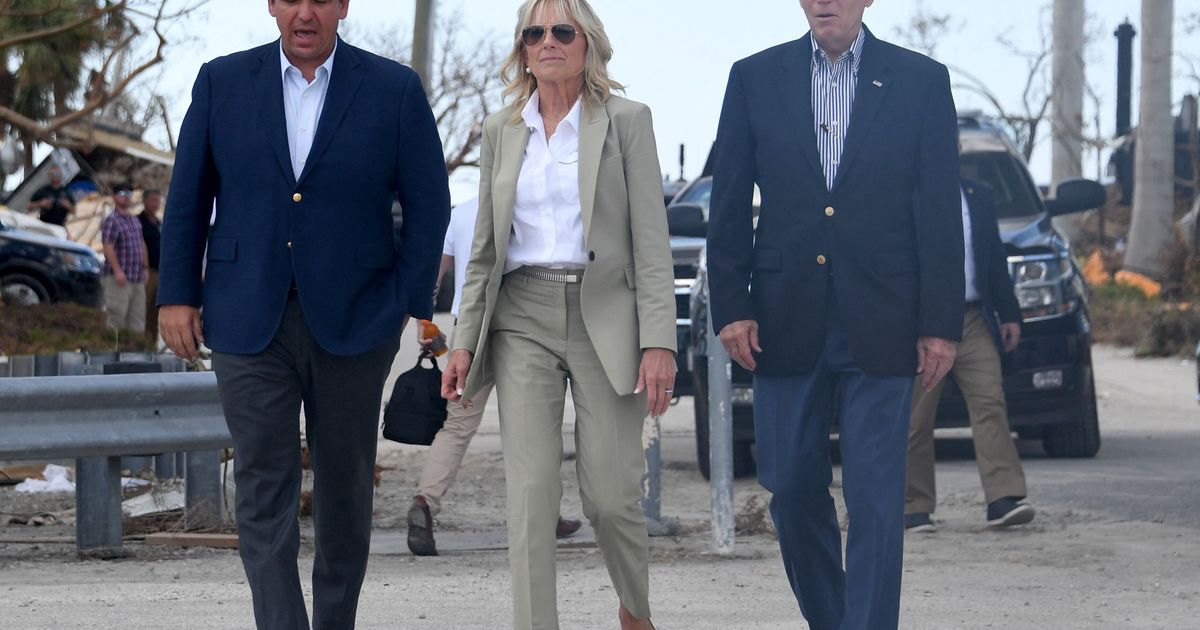 After a nearly full year of gleefully engaging in a euphemism for “Fuck Joe Biden,” Republican Gov. Ron DeSantis on Wednesday greeted the man he’d been calling “Brandon” to thank him for helping Florida’s recovery from Hurricane Ian.

“I want to thank President Biden,” said DeSantis in Fort Myers Beach, following Biden’s immediate approval of the governor’s request for a disaster declaration before Ian even hit, as well as a doubling of the normal 30-day window in which affected areas can get full reimbursement for debris removal. “Mr. President, welcome to Florida. We appreciate working together.”

One longtime GOP consultant said he had long thought it odd that DeSantis would adopt such a childish insult of the sitting president. “It’s been puzzling to me because of our status as a ‘we-need-help’ state every so often,” the consultant said on condition of anonymity.

Neither DeSantis’ press office nor his campaign responded to HuffPost’s queries about the euphemism, and neither the president nor the governor alluded to it during their hour or so together amid destroyed businesses beneath the bridge to the mainland.

Biden, for his part, had only praise for DeSantis.

“I think he’s done a good job. Look, I called him ― I think even before he called me — when I heard this storm was on its way. We worked hand-in-glove. We have very different political philosophies, and — but we worked hand-in-glove,” Biden said. “And he’s been on — on things related to dealing with this crisis, we’ve been completely lockstep. There’s been no difference.”

Biden spent Wednesday afternoon in the Fort Myers area to hear from state and local officials as well as to view the damage firsthand. DeSantis and his wife, Casey DeSantis, greeted the president and first lady Jill Biden as they emerged from their SUV. DeSantis, dressed in a suit coat and dress shirt rather than the branded campaign gear he had worn Sunday and Monday, spoke for four minutes out of earshot of the media, appearing to give Biden an overview of the destruction.

They then walked over to speak with Florida’s two senators, Rick Scott and Marco Rubio, both Republican, as well as local officials and residents who have been hurt by the storm.

DeSantis, who as a member of Congress representing northeastern Florida in 2012 voted against providing New Jersey with aid in the wake of Hurricane Sandy, is now pushing for as much federal assistance as possible to help Floridians recover from Ian’s trail of devastation after it hit the peninsula last week.

And that push has included multiple conversations with Biden, whom DeSantis as recently as this spring had been insulting with a phrase that many Republicans adopted to attack the Democratic president, referring to an obscenity without technically using it.

“Obviously, Brandon in the White House is a total disaster,” he told right-wing podcaster Lisa Boothe in May.

“Brandon” is a reference to “Let’s go Brandon” — a TV announcer’s mischaracterization of the chant “Fuck Joe Biden,” which a crowd had repeated at a 2021 NASCAR race in Alabama.

Ironically, DeSantis himself emphasized the importance of a governor being able to work with a president of either party when he was seeking the job in 2018. Running against Democrat Andrew Gillum — who, like most in his party that year, was campaigning as much against then-President Donald Trump as his actual opponent — DeSantis said, “I think the next governor absolutely needs to be able to work constructively with Washington to advance Florida’s priorities.”

And DeSantis at least for a while appeared to live by that after Biden took office. On July 1, 2021, he appeared with the new president in Surfside, where a condominium tower had collapsed, killing 98. “You guys have not only been supportive at the federal level, but we’ve had no bureaucracy,” he said then.

But DeSantis’ deference to the office appeared to fall with Biden’s approval numbers, so that by October 2, 2021, when the sportscaster told viewers that a vulgar chant about Biden was actually praise for winning race car driver Brandon Brown, DeSantis was quick to take up the insult.

On Nov. 3, in a West Palm Beach speech, DeSantis talked about “what’s going on with the big corporations, with their woke agenda, the Biden — the Brandon administration.”

Two weeks later, DeSantis chose to sign into law a bill designed to hurt Biden’s coronavirus vaccine mandates in the Tampa suburb of Brandon. When the invited audience broke into a “Let’s go Brandon” chant, DeSantis smiled. “I think that Brandon, Florida, is a great American city,” he said.

DeSantis is currently seeking reelection to a second term as governor but is also considered a likely candidate for the 2024 GOP presidential nomination.

SCOTUS whistleblower admits incident in his book ‘possibly’ did not…