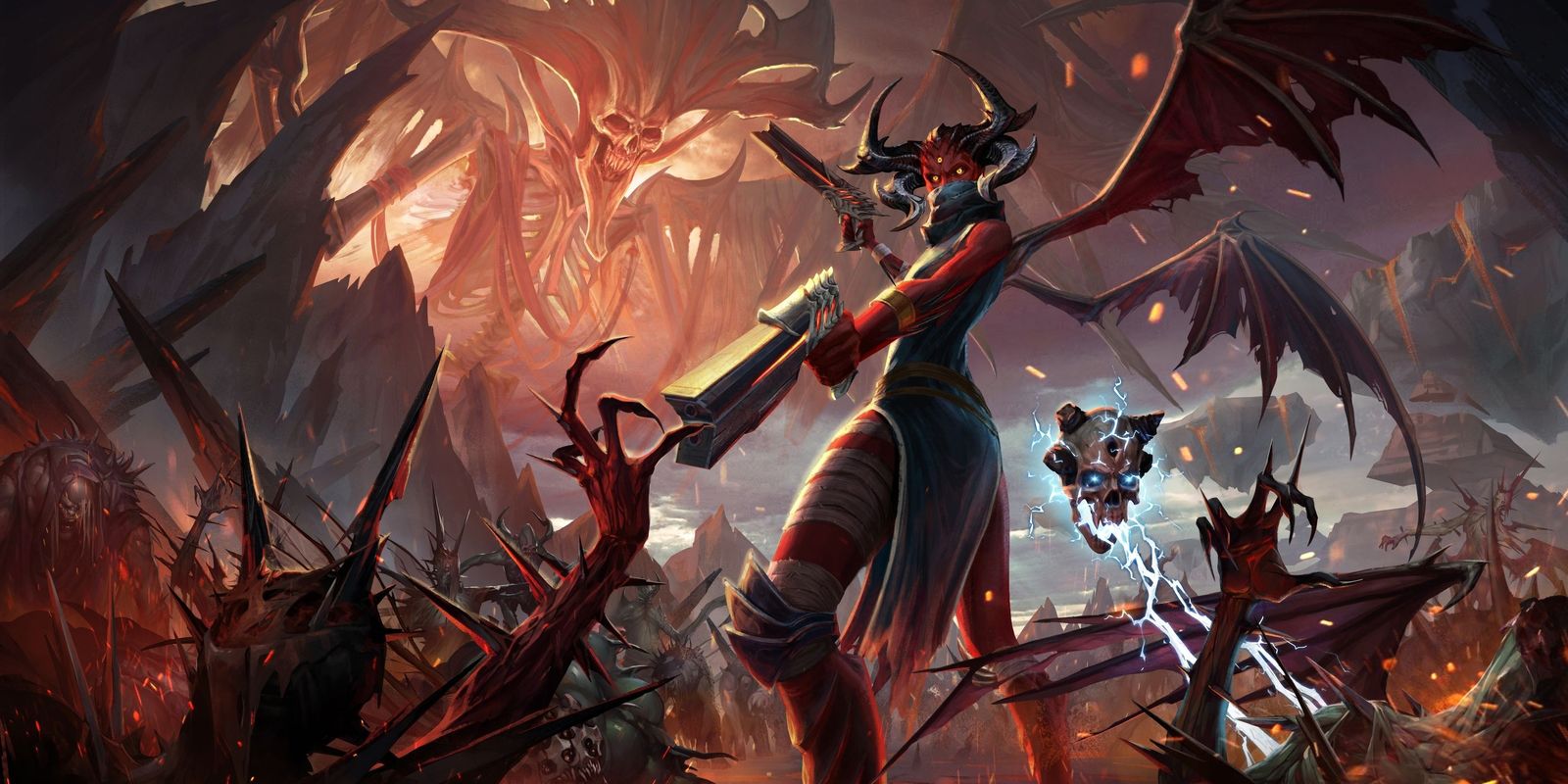 At the tail end of 1993, the release of DOOM ushered in the era of the first-person shooter with its now-iconic mix of guns, demons, and heavy metal. In the almost 30 years since the game’s release, DOOM has influenced untold numbers of games, as well as come back to the forefront in style with its 2016 reboot and sequel, DOOM Eternal. Most recently, the Swedish studio The Outsiders wears the game’s influence on their sleeve in their upcoming indie game, Metal: Hellsinger.

Metal: Hellsinger sees you take on the role of The Unknown, a half-demon, half-human warrior with a score to settle with Hell. In the playable demo available on Steam, gamers can immediately feel the influence of DOOM. The Unknown carves through waves of demonic creatures with a variety of weapons that would feel right at home in the Doomslayer’s hands. Behind all the carnage, players are treated to a heavy metal soundtrack. That soundtrack is where Metal: Hellsinger adds something new to the demon-killing action.

Related: Dead Space: Why the Trilogy Needs a Remaster

Instead of shooting and slashing apart monsters as quickly as possible, Metal: Hellsinger asks players to slay to the beat in a mix of rhythm gaming and FPS action, much like roguelike shooter Bullets Per Minute. Shooting on-beat deals more damage and increases the fury multiplier, escalating the score for every demon slayed. With that simple addition, the gameplay in Metal: Hellsinger becomes a pulse-pounding dance as the player paces their shots, leaping back from enemies and giving themselves the perfect opening to strike.

Killing to the beat doesn’t just deal more damage and earn more points. A major part of the game’s soundtrack are vocals from some of the greats of metal. Once a player hits the maximum 16x fury multiplier, vocals from artists like Randy Blythe from Lamb of God or Serj Tankian from System of a Down mix into the music. The feature creates a fantastic blend of mechanical and emotional satisfaction: not only does keeping your fury high get you a better score, but the soundtrack of the level truly comes into its fullest with the vocal tracks.

The melding of the game’s soundtrack into the combat becomes even more pronounced thanks to the attention to detail in the weapons used by The Unknown. The pump-action shotgun in the demo takes just enough time between beats to chamber the new shot, making the rhythmic firing feel natural. As animations and attacks speed up or slow down based on the song playing, each weapon is guaranteed to work seamlessly with the soundtrack.

All of this makes Metal: Hellsinger‘s brief demo play just as well as the greats. The unapologetic style may be off-putting to those who aren’t fans of metal, but the developers made the right choice in committing fully to the metal aesthetic. It remains to be seen how much further the game will go, but if the developers are able to keep the level of engagement seen in the demo up for the entire game, it has a very real chance of outshining the gameplay in DOOM and DOOM Eternal.

With all the effort put into tuning the gameplay and music to work with one another, Metal: Hellsinger provides the same demon-killing gameplay that put DOOM on the map with enough style to feel new. Any fans of DOOM Eternal will want to check this game out when it releases in September. While it’s impossible to dethrone id Software’s genre-defining series, Metal: Hellsinger is shaping up to be a great tribute to the legacy that DOOM has created.