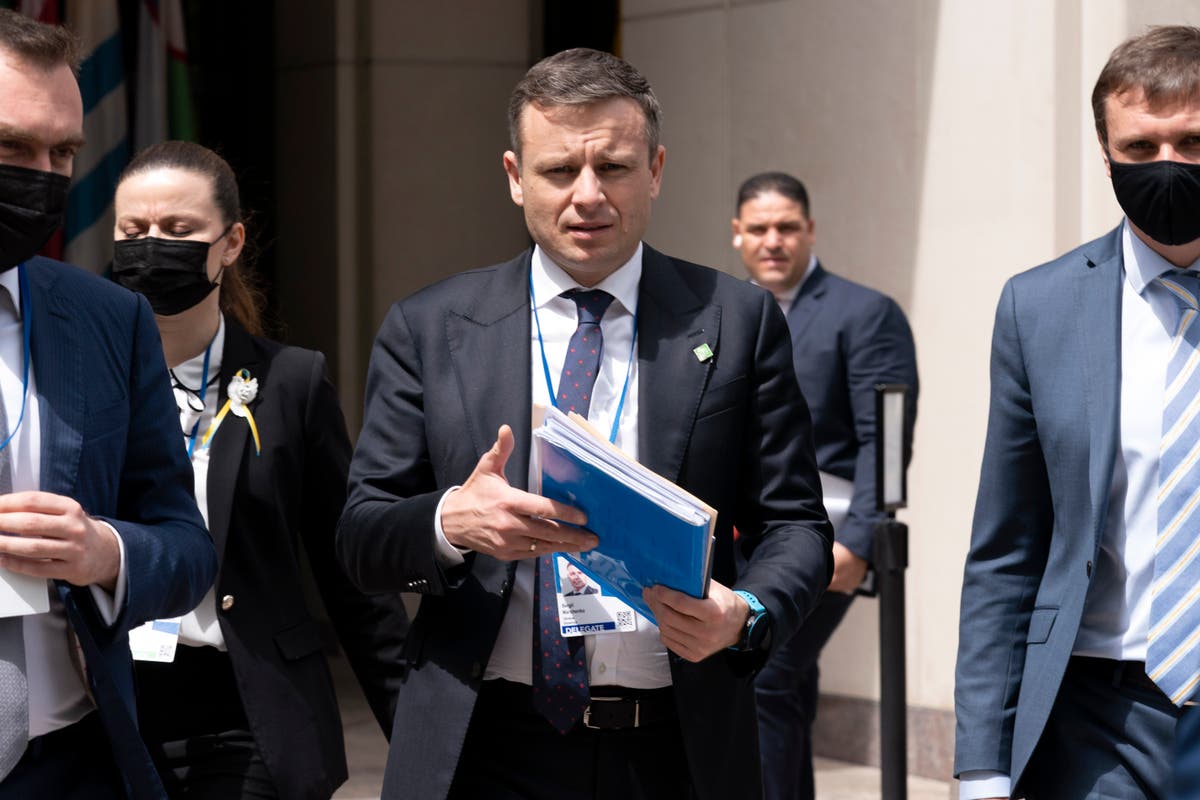 Ukraine’s finance minister says crucial Western financial support is “not charity” but “self-preservation” in the fight to defend democracy as his country deals with growing costs to repair electrical and heating infrastructure wrecked by Russian attacks.

Serhiy Marchenko also told The Associated Press in an interview Thursday from Kyiv that he believes European Union officials will sort out a dispute with Hungary that has blocked a key 18 billion-euro ($18.97 billion) aid package and would cover much of Ukraine’s looming budget gap.

Marchenko said financial support for Ukraine is tiny compared to what developed countries spent to combat emergencies like the global financial crisis of 2008 and the COVID-19 pandemic. And that the money bolsters freedom and security far beyond his country’s struggle, he added.

“It’s not charity to support Ukraine,” Marchenko said. “We are trying to protect freedom and democracy of all (the) civilized world.”

He said the damage from Russian missile attacks on civilian infrastructure such as power stations would cost 0.5% of annual economic output next year, adding to the burden as Ukraine tries to cover a budget deficit equivalent to $38 billion. The World Bank put Ukraine’s gross domestic product at just over $200 billion in 2021, so the damage could amount to roughly $1 billion.

Ukraine needs outside financing to cover the budget deficit caused by the war. Cash or loans help it avoid printing money at the central bank to cover basic needs like paying people’s pensions, a practice that risks fueling already painful inflation.

Proposed EU loans worth 18 billion euros, along with major U.S. support and possible help from the International Monetary Fund, would cover a large part of Ukraine’s budget shortfall. But the European package has been blocked by Hungary over disputes with Brussels, which is concerned about democratic backsliding and possible mismanagement of EU money in Budapest.

“Of course, it’s worried us and we’re worried that it can block or postpone the money flow for Ukraine,” Marchenko said. “But I believe that the wisdom” of EU officials “can solve all issues, and they will together join Ukraine’s efforts for independence.”

He praised what he called continuing strong support from Western governments, citing the U.S. in particular for its “predictability.” Total aid committed to Ukraine reached 113 billion euros as of this week, according to data compiled by the Ukraine Support Tracker at the Kiel Institute for the World Economy.

“Now is not the time to postpone any support, to just be tired of Ukraine and Ukraine’s problems … because the next time, you realized that without Ukraine, Russia will come closer to the European border,” Marchenko said.

“It’s about self-preservation, it’s self-protection — this should be in the minds of EU citizens,” he added.

Ukraine has made gains on the battlefield but has been struggling with Russian attacks on critical infrastructure, leaving millions of Ukrainians without regular access to heat, electricity and water in sub-freezing temperatures, U.N. officials say.

Donors are scrambling to get generators, insulation, medical supplies and cash into the country as winter looms. The U.N. Development Program and World Bank are working to assess damage and fill requests for power transformers and substations to restore Ukraine’s electrical grid.

On top of people losing power and heat, Marchenko noted how the number of Ukrainians living in poverty has been “increasing drastically.” Inflation was above 26% as of October and could rise to 28% by year’s end, he said.

The government is working to increase pensions for some, while Western donations go toward social and humanitarian aid.

“All possible resources which we can use, we will use to help our people to survive in this condition,” he said. “But again, people understand why they are suffering” — to live in an independent country.

Ukraine improved its score on Transparency International’s corruption perceptions index in recent years but still ranked 122 out of 180 countries before the war.

“And I would prefer that this myth or this story about Ukraine’s corruption will evaporate after the war,” he said.

Marchenko’s stance on corruption was echoed by Torbjorn Becker, director of the Stockholm Institute of Transition Economics, during an online book launch Thursday for “Rebuilding Ukraine: Principles and Policies” by the Paris- and London-based Centre for Economic Policy Research.

“If a country is not spending money wisely when it’s being attacked by a neighbor like Russia, we know that they would have lost the war by now,” Becker said.

“So the fact that Ukraine is still there and defending its territory is one of the testaments that corruption should not be our focus now when we are talking about support to Ukraine,” he added.

Follow AP’s coverage of the war in Ukraine: https://apnews.com/hub/russia-ukraine