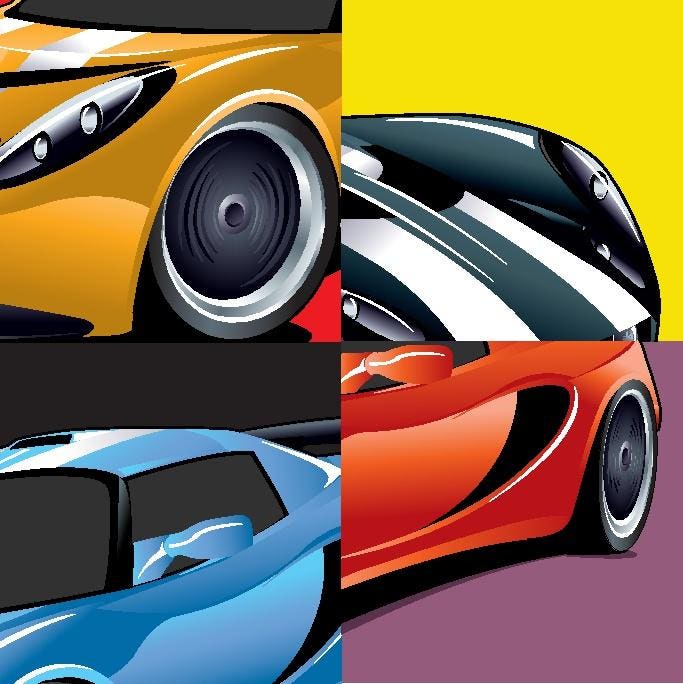 According to a (very) old joke, “What do you get if all the vehicles in the U.S. are painted white?” Answer, “A white car-nation.”

As it turns out, that’s not far off, as around 25 percent of all cars, trucks, and SUVs are indeed white as snow these days, followed closely by those with black, gray, and silver paint jobs. Accounting for more than three-quarters of all new models sold, that would more accurately make this a monochromatic car-nation.

While none of those choices would tend to have an adverse effect on a vehicle’s resale value, neither would they do anything to increase it. Rather, those looking to maximize their rides’ worth down the road should choose something a bit more expressive.

According to a study of over 650,000 pre-owned car transactions conducted by the used-vehicle website iSeeCars.com, a buyer’s color choice can help boost or bust its return down the road. Specifically, the report determined that vehicles painted yellow are no lemons when it comes to bringing back the bucks. All else being equal, yellow cars were found to depreciate an average of just 4.5 percent over a three-year ownership period. That’s 70 percent less than the average vehicle painted in a far more neutral tone.

Used vehicle values are, of course, largely based on a given model’s condition, location, and the number of miles on the odometer. But why do yellow-hued models tend to command more in the used-vehicle market than those painted in other colors? It’s a simple case of supply and demand. “Yellow is among the least popular car colors with the lowest vehicle share and is commonly a color for sports cars and other low-volume vehicles that hold their value relatively well,” iSeeCars Executive Analyst Karl Brauer. “Because yellow vehicles are so novel in the secondhand marketplace, people are willing to pay a premium for them.”

On the other hand, not all “unique” colors will positively affect a model’s eventual worth. You’ll take the greatest hit choosing a car that’s painted brown. How now brown car? On average, it will depreciate by 17.8 percent over a three-year period. “Rarity alone does not equal value,” Brauer explains. “If a color doesn’t resonate with enough used car shoppers it will hurt resale value, even if it’s uncommon.”

We’re featuring the list of 17 above and below-average paint treatments for retained value at the end of this post.

According to the iSeeCars report, yellow is the most valuable colors among convertibles and SUVs, while orange does it for coupes, beige is best for pickup trucks, and purple, being among the rarest of colors in any segment, boosts the value of sedans the most.

Oddly enough, two of the least flashy (and some might say among the most objectionable) colors—green and brown—register the lowest depreciation rates among three-year-old minivans, with comparable red vans losing considerably more of their initial worth after three years. Apparently, it all comes down to taste (or some might argue a lack thereof). “Minivans are a sensible vehicle choice, so purchasing a less-common color can make it a more exciting purchase,” says Brauer.

Average three-year depreciation is 15.0%. Source: iSeeCars.com. You can read the full report here.

Why this slick hotel could be the most Insta-friendly spot…