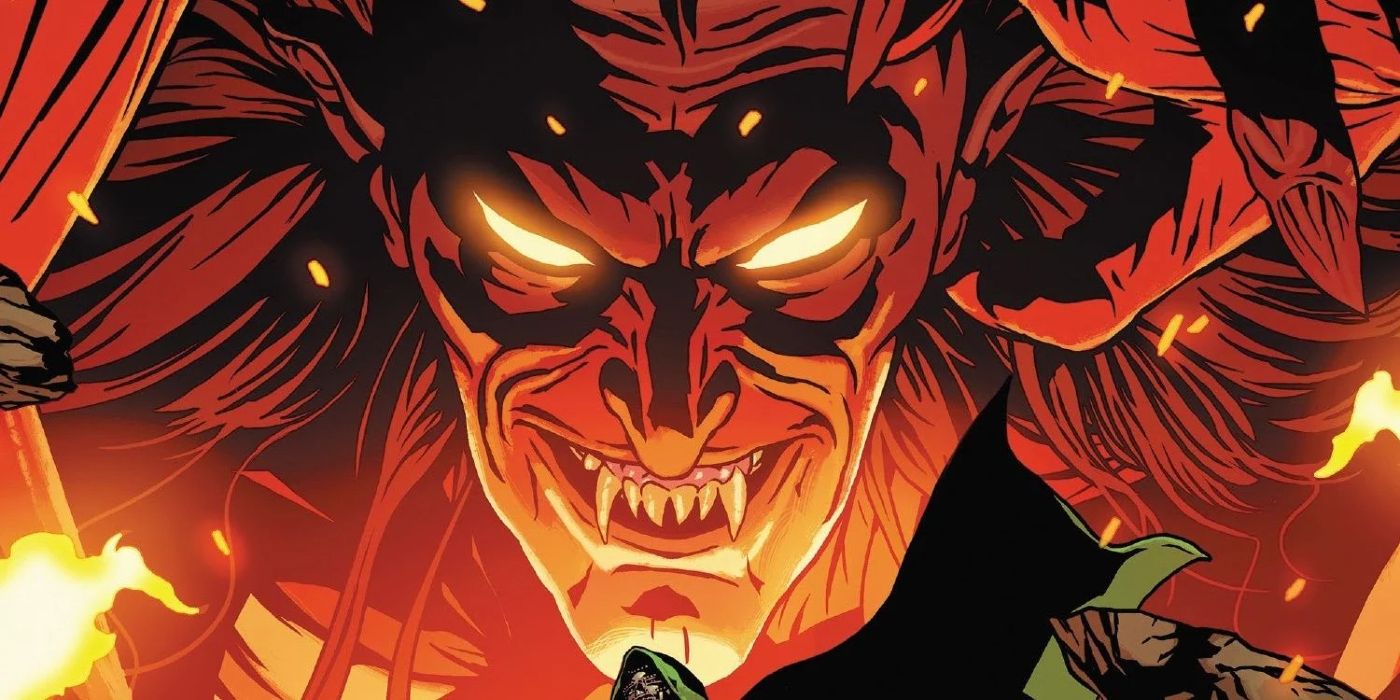 The following contains spoilers for Avengers #55, now on sale from Marvel Comics.

When fans think of Marvel’s version of the devil, Mephisto, the image of a horned, red-skinned demon is usually the first thing that comes to mind. However, when the self-styled Ruler of Hell appears before the former Squadron Supreme member Nighthawk and the titular team in Avengers #55 (by Jason Aaron, Javier Garron, David Curiel, and VC’s Cory Petit), it’s in the form of a black dog.

When Iron Man points out that Mephisto doesn’t look like the “Father Serpent” that the deranged Serpent Society believed they were summoning, the villain simply says “These days, people see whatever they need to see when they stand in my presence” before showing off the many forms he and his army of alternate universe selves are capable of taking. In doing so, Mephisto not only shows off what the Avengers are up against, but he also explains a bizarre and terrifying alternate form that he took when he confronted the Man Without Fear in Daredevil #266 (by Ann Nocenti, John Ramita Jr., Al Williamson, Gregory Wright, and Joe Rosen).

RELATED: X-Men: Mephisto Once Offered A Deal To Nightcrawler – And Got Knocked Out For It

In the issue, a depressed Daredevil (aka Matt Murdock) sat alone at a bar on Christmas Eve, having ended his relationship with Karen Page. As the bar’s other patrons spoke of their sorrows, the vigilante was approached by a beautiful red-haired woman who bared an uncanny resemblance to his one-time love interest Black Widow. Seemingly aware of the Man Without Fear’s recent misfortunes, the woman flirted with Daredevil, but her advances turned sinister when she began asking him if his attempts to be a hero were worth it if his only reward was misery.

As their conversation continued, it became clear that the woman’s mere presence seemed to bring out the worst in the people around her. By the time Daredevil realized something was wrong, a friendly reunion between two estranged brothers had turned into a violent confrontation that left one brother dead, and the woman revealed herself as Mephisto, who’d come to give the Devil of Hell’s Kitchen a fiendish Christmas present.

RELATED: How Mephisto Launched a Secret War Against the Marvel Universe

In contrast to his usual demonic form, Mephisto took on the appearance of a tall humanoid comprised of intestine-like strands of flesh with a long, almost equine face and tentacle-like tongue. He taunted Daredevil, mocking his attempts to reconcile his belief in a loving God with his recent string of personal tragedies and told him that wickedness was the true supreme power in the universe. As he discarded the drunk and despondent vigilante in a back alley, Mephisto gave the hero his “gift”: a reminder that faith can never defeat the evil that lurks within human beings and a promise that he would one day claim Matt Murdock’s soul.

Although Daredevil’s faith in humanity was restored when a couple of friendly bums offered to spend Christmas with him at the local soup kitchen, his encounter with Mephisto remains one of the villain’s most terrifying and memorable appearances. It’s also the first time that Marvel didn’t portray him as a stereotypical Judeo-Christian devil. Instead, the issue painted Mephisto as an elemental force whose appearance was unique to everyone who saw him, taking on the form of his observer’s deepest fears and regrets.

While Mephisto’s radically-altered design was a bizarre and even unpopular deviation from his established portrayal as an allegory for Satan, his comments in Avengers #55 retroactively explain why he chose the form that he did. When the demonic fiend confronted Daredevil, the Man Without Fear was questioning not only his faith in God but his faith in humanity itself. By taking on the horrifying image of a living avatar of raw, unformed evil, Mephisto cut straight to the heart of Daredevil’s existential crisis and wore the hero’s inner demons like a coat.

Mephisto’s appearance in Daredevil #266 changed how the character would be portrayed in later appearances. No longer confined to the form of the stereotypical devil, he was free to take on any form, expanding his ability to influence and manipulate others. On top of that, the ability to change into any form established Mephisto as one of the most powerful beings in the Marvel universe, pushing him beyond his limiting role as “Marvel’s devil” and allowing him to become a more dynamic and terrifying villain.

In the last two decades, Mephisto has been one of the Marvel universe’s most prominent and influential villains, engaging in acts such as stealing Spider-Man’s marriage to Mary-Jane Watson and removing the Avengers from the timeline. Although the Lord of Lies could have reached this point without Daredevil‘s groundbreaking alteration to his established image, the issue paved the way for the numerous nightmarish images that Mephisto would take in later years. Although Mephisto failed to break Daredevil’s spirit, his fateful encounter with the Man Without Fear made him an even more terrifying villain.

Did Anyone Ever Win the $1000 Prize For This Forgotten Comic Book Mystery?

Drew Kopp is a Comics Features Writer for CBR who holds a Bachelor’s Degree of Fine Arts in Creative Writing. As a die-hard fan of comic books, fantasy/sci-fi literature, and video games, he loves nothing more than injecting his love of storytelling into his writing, and he also loves nothing more than writing about all things nerdy. When he isn’t busy obsessively theorizing over comic book plots or drooling over the next big indie game, he can be found writing about those topics.