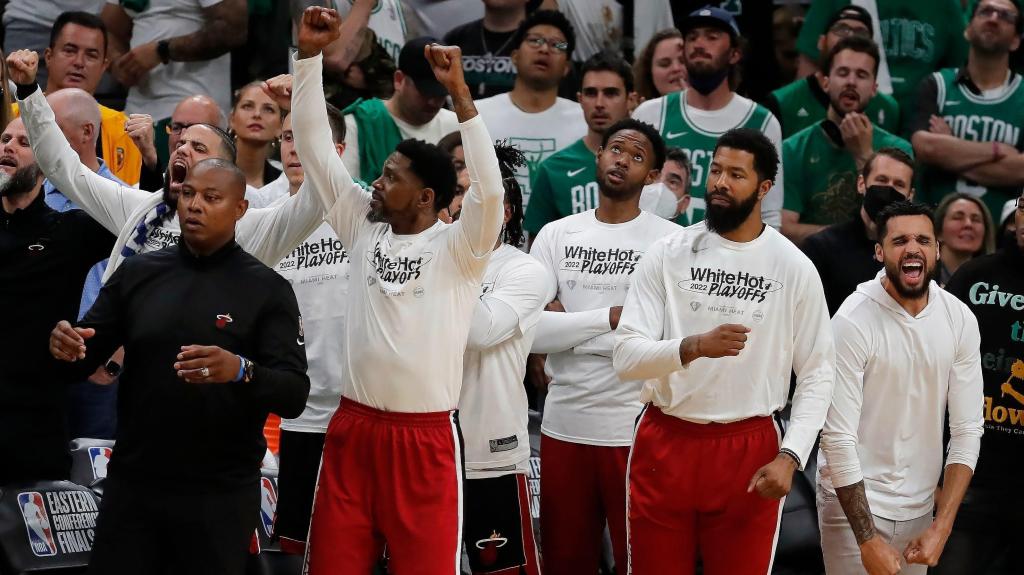 It began as a seemingly innocuous, benign mention in an ESPN midseason analysis of the NBA championship race.

It has turned into a Miami Heat social-media anthem.

No, at the moment there are no plans for a City Edition uniform emblazoned with those two words.

At least not yet.

But if this ride through the playoffs pushes into June, that could be, well, looming.

“We’re on the bandwagon,” Cedric Brown, the Heat’s director of digital media, said with a smile. ” ‘Loomers.’ That’s such a good word.”

The ill-loom-ination came Jan. 12, when ESPN posted a piece rating the league’s contenders, an article titled, “NBA playoff contender teams: Where every team stands at the season’s midpoint.”

A list followed, beginning with “Tier 1: The six true contenders.”

That field featured, in order, the Brooklyn Nets, Milwaukee Bucks, Chicago Bulls, Golden State Warriors, Phoenix Suns and Memphis Grizzlies. Of that group, only the Warriors are still playing.

The two-team tier included the Heat and Los Angeles Lakers, with the comment, “Squint hard enough and you can convince yourself that the two teams that met in the Finals in 2020 could get back there in 2022. But this isn’t the bubble.”

The pairing seemed incongruous, even with the potential of any roster featuring LeBron James.

At the time, Brown said he was unaware of the piece by Kirk Goldsberry, a college professor who has served, according to his online biography, as head analyst for Team USA Basketball and as the Vice President of Strategic Research for the San Antonio Spurs.

The analysis was cogent, noting of the Heat at the time, “This roster is dangerous. They have All-Stars, they have grit and they have depth. With Erik Spoelstra in place, they could do lots of damage in the playoffs.”

Still, the pairing with the Lakers, more than any type of snub of being ranked lower than six others, was what resonated with the fan base.

Brown said it was difficult not to notice.

“Our fans enjoyed it so much,” Brown said. “So when ESPN posted the article and they teamed us with the Lakers, the dangerous loomers, our fans picked it up and the screenshots were everywhere.

“And we were like, ‘Yeah, it is not a place that we think we are. So let’s kind of run with it, make fun of it along with our fans,’ because we try to be an extension of them. So that’s kind of why we hopped on that bandwagon a bit.”

Including a social-media post, in all capital letters, when the Heat made the Eastern Conference finals of, “DANGEROUSLY LOOMING IN THE EASTERN CONFERENCE FINALS.”

The bandwagon, in fact, had built up considerable steam even before this run to the East finals against the Boston Celtics, with Game 4 of that series on Monday night at TD Garden.

Had any other term been utilized, perhaps even the title for the next grouping listed in the ESPN article as “Solid Playoff Teams,” it likely would have ended there.

“It’s so good to use,” Brown said. “There’s so many different ways to use it. It’s very unique. It’s not a term you hear every day. So it’s fun. It’s one of those unique words, like you say it, everybody else knows.

“Everybody else knows that we’re referring to that ESPN article, and it’s been great.”

For their part, the players have remained above the looming fray.

With Brown in attendance at the East finals, it has had him crossing paths with several from ESPN, which is broadcasting the series.

So far, no pushback from the worldwide leader in looming.