How to do Glastonbury Festival for free – become a litter picker 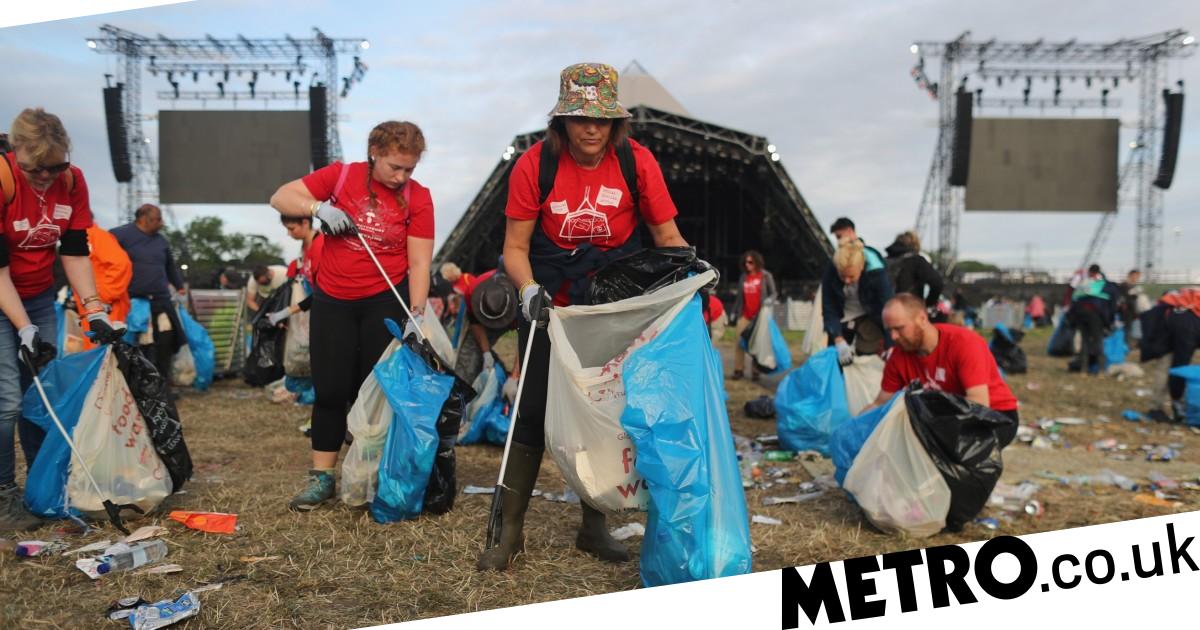 Amanda Ayres says the Glastonbury festival was always on her bucket list. So when the opportunity arose to sign up as a recycling volunteer, she couldn’t say no.

Dismiss any notions of headless bats courtesy of Ozzy Osbourne or a pair of Mick Jagger’s tighty whiteys, though. Removing every trace of revelry from the Worthy Farm festival isn’t all rock ’n’ roll. For starters, Ayres, 29, wakes up at 5.15am to start her 6am shift.

‘The worst experience wasn’t getting up early but the muddiness of 2016,’ she says. ‘It made it difficult to litter-pick as it was mushed into the ground.’

Ayres, a digital PR consultant, is one of a 1,300-strong army of volunteers and she says each year – 2022 will be her fifth festival – the team is made up of people of all ages and career backgrounds.

With litter grabbers at the ready, each member is given three bags: one for general waste, another for compostable bits and a third for recyclable items. They litter-pick until noon with breaks – and two meals – throughout their shift. After which Ayres and her friends head back to their campsite to enjoy the festival.

‘Glastonbury has always been a very eco-conscious festival,’ she says.

‘In 2019, when they announced the ban on the sale of single-use plastic bottles, we noticed a huge difference when we had our first shift. There was a lot less rubbish and no single-use plastic in sight. It meant less litter on the fields.’

In 2019 – the last time the festival was held – organisers recycled more than 68 tonnes of paper and card, 38 tonnes of glass, 57 tonnes of cans and 17 tonnes of plastic bottles. They also turned 14,000 litres of cooking oil into biofuel. That year, 149 tonnes of food waste was turned into compost.

Ayres started litter-picking at Glastonbury to raise money for the Wessex Heartbeat charity, based at Southampton General Hospital’s cardiac centre. She pays for her ticket outright but, once she has completed her shifts, the ticket money is returned – £100 of which is donated to the charity.

In 2019, the Somerset Live website surveyed Glastonbury litter-pickers, who said they had found oddball items including a cannonball, nitrous oxide canisters and even a poo in a bra hanging from a tree.

‘I’ve never found anything weird,’ says Ayres. ‘It’s just great to be part of a team that’s contributing to helping the environment… one litter-pick at a time.’

2. All on-site food service disposables are made from paper, card, wood or leaves, and are fully compostable

3. Body glitter sold at the festival is biodegradable

4. Since 2015, Pee Power urinals developed by the University of the West of England have been used to create microbial fuel cells that are used at mobile phone charging stations

5. All cans, glass, paper, wood and organic waste collected from the 15,000 bins are hand-separated and processed at the farm’s recycling centre

7. Forty per cent of Glasto’s 200,000-plus visitors travel via public transport


MORE : Half of Glastonbury trains cancelled because of rail strikes


MORE : Glastonbury 2022 lineup: Who is playing and how to watch it on TV?


MORE : Sir Paul McCartney to be Glastonbury’s oldest ever headliner

Thousands of men with prostate cancer could be spared chemotherapy