How to talk to stepson about his dad 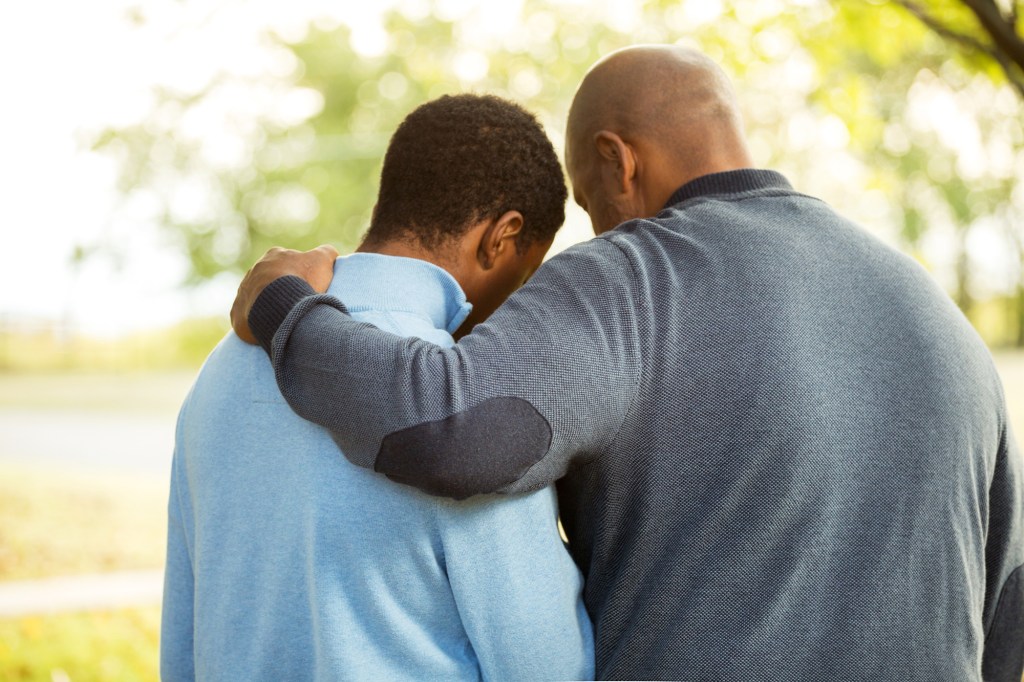 Q: My parents divorced when I was a teen, and I had a difficult relationship with my alcoholic father, which impacted my self-worth and adult relationships for years. Now, as a stepfather, I see my young-adult stepson dealing with similar issues — especially feelings of disappointment and anger — around his deceased birth father, who was also an alcoholic. From what I saw, my stepson’s father “mailed it in” as a parent. My wife’s analysis is far less charitable. How can I help my stepson avoid the pitfalls that I encountered without seeming like I expect him to fail, or speaking ill of his dead father?

A: There’s a lot to unpack here, so let’s start with the basics: Your stepson needs you to be there for him as a dependable, interested and emotionally available father figure. This isn’t going to be easy, as many (most) young (and old) men have a hard time opening up about the issues you brought up in your question.

As you experienced, children of alcoholic parents are more likely than other children to suffer from low self-esteem, feel isolated and behave impulsively; they often have difficulty trusting others in relationships — especially romantic ones — and are especially prone to abusing drugs or alcohol themselves.

It’s hard to sit by and watch someone else’s pain, but as you know from personal experience, time and effort really can heal wounds. Your son’s disappointment with his biological father is natural, and his anger and pain are understandable. That said, as imperfect as his father was, your stepson will still miss him.

Don’t force the discussion, but when the opportunity presents, make it clear that you’ve been in the same place. Acknowledge that he doesn’t feel that he was loved or valued by his biological father, and be as empathetic as possible. Make it clear that talking about his father’s alcoholism and its impact on him is not the same as judging.

Perspective is important, and it’s key to remind your stepson about the power of the family that you and your wife have created and his role in it. It’s also important to be supportive of his positive life relationships, whether they be with his friends or a romantic partner. Even though he’s a young adult, self-esteem boosting and demonstrating resilience can help counteract the challenges he’ll face relative to the loss of his father.

You also need to be as positive as you can when speaking with your stepson, as he’s looking for signs that you and his mother recognize his loss and will always be there for him. Since you went through a similar crisis with your own father, you have a lot to offer about how you overcame the handicap of an alcoholic and distant — or worse — parent. Don’t underestimate the value of sharing your life experience with your stepson.

Patience is a core value for any stepparent, and you’ll need a lot of it, as your stepson may struggle for years with both his father’s alcoholism and his early death. Like you, he may worry about whether he’ll succeed or fail as a father, whether he’s doomed to become an alcoholic himself, or whether he’s destined to make any of the other mistakes his father undoubtedly made. Have an honest discussion about genetic predisposition to addiction and alcoholism so he knows the headwinds he may have inherited in his genes. But remind him that when it comes to behavior, he has a lot of control — and can choose his own path and role models. Hearing how you felt and how you met and overcame your challenges will no doubt reassure him.

For most of us, the stage of parenting that happens after our children move out and live on their own is the longest. Helping your stepson grow into the best man he can be will help make the transition easier for the three of you. As you all move forward, keep those lines of communication open and remind him from time to time that you’re happy to discuss the common experiences that have influenced both your lives. The benefits to each of you will be huge.

Know When & Where to check