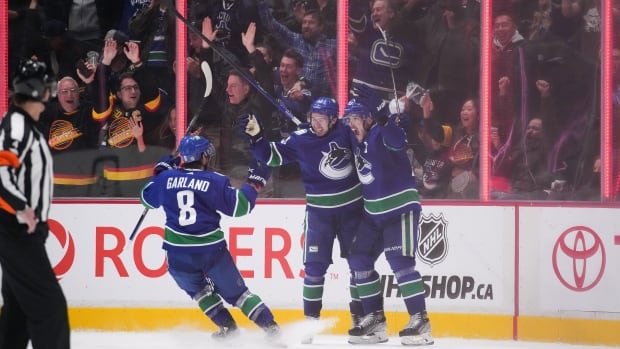 There were times in the third period Tuesday when Vancouver Canucks head coach Bruce Boudreau felt like a cartoon rabbit.

His team came into the final frame up 4-2 but conceded a pair of goals to the Vegas Golden Knights, forcing extra time in a crucial game for both sides in Vancouver.

“I was telling the guys in there, ‘Have you ever seen the old Bugs Bunny cartoons when he sees another bunny that’s really pretty and the red heart keeps coming out of your chest?’ I felt like that in the third period,” Boudreau said.

While the Canucks allowed the Golden Knights back into the contest, the home side prevailed, with Quinn Hughes scoring 51 seconds into overtime to give Vancouver a 5-4 win.

The defenceman picked up the rebound from Conor Garland’s shot in front of the Vegas net and waited patiently for goalie Robin Lehner to drop flat to the ice before putting a shot up and over his pad into the wide-open net.

The result moved Vancouver within three points of Vegas, with both teams grasping for a playoff spot. Vegas is three points back of Dallas for the second Western Conference wild-card spot and the Canucks are six points out.

The Canucks have won four games in a row to keep their faint post-season dreams alive.

“It’s pretty clear what we’ve got to do. We’ve got to win,” said Elias Pettersson, who had a goal and two assists for the home side on Tuesday.

“We feel pretty good now, we’ve won four in a row. But it doesn’t mean [much] if we don’t continue this way, playing good hockey. We’re still behind, we’ve still got to win games. And we’re just thinking about the next one.”

Hughes and Bo Horvat each scored and had an assist for Vancouver (36-28-10), while Vasily Podkolzin and Brad Richardson also found the back of the net and Garland contributed two assists.

Shea Theodore knotted the game with a pair of goals in the third period, Alec Martinez had a goal and an assist and Michael Amadio put away a goal for the Golden Knights (40-29-5).

“Obviously proud of the way the guys battled back,” Martinez said. “Getting points this time of year is big but that said, we’re shooting for two, not one. There’s something that we need to tighten up, some things we need to work on but we just got to focus on next game.”

Vancouver got a stellar 41-save performance from Thatcher Demko and Lehner stopped 22-of-27 shots for Vegas.

The Golden Knights pulled Lehner with 1:46 left on the game clock in favour of an extra attacker.

With 41.4 seconds to go, Theodore launched a rocket from the top of the faceoff circle and the puck flew over Demko’s glove for the equalizer.

Theodore brought Vegas within one 6:27 into the third period, whipping a shot past Demko’s blocker side from the faceoff dot.

The Golden Knights were a force to start the third, putting up the first 11 shots of the period.

Boudreau said the final frame should act as a teaching moment for his side.

“Our second period was great but our third period, when you’re playing a good team, you can’t sit back,” the coach said. “And usually that lesson costs you and it didn’t cost us tonight. So it was a very cheap lesson learned, I thought.”

Pettersson set up Vancouver’s fourth goal of the night with a highlight-reel play midway through the second, intercepting the puck in the neutral zone and streaking down the ice with Richardson on a two-on-one.

He appeared poised to shoot in tight but instead sent a no-look pass across the slot to Richardson, who tapped it into the yawning net.

Vegas cut the deficit to a single goal 4:35 into the second when Amadio’s shot from the low slot deflected in off of Horvat to make it 3-2.

Vancouver took a two-goal cushion 79 seconds earlier when Garland sprang Pettersson for a breakaway and the star forward fired a laser on net. Lehner made the stop, then fell backward with the puck falling between his legs and Vegas defenceman Zach Whitecloud pushed it in over the goal line with his skate.

Officials on the ice initially waved the goal off but after a video review, Pettersson was credited with his 26th of the season and the Canucks took a 3-1 lead.

Vancouver opened the second with more than a minute and a half left on a power play after Evgenii Dadonov was called for high-sticking late in the opening frame.

Stationed in front of the net, Podkolzin took a slap pass from Pettersson and looked to snap a shot past Lehner. His initial attempt hit the post but the Russian rookie collected his rebound and popped it in past the netminder.

Vancouver went 2 for 3 on the man advantage Tuesday and Vegas failed to score on three power plays.

Special teams are something the Golden Knights need to work on, said head coach Pete DeBoer.

“Well, we’ll take the point. I think we’re gonna have to be better than that down the stretch in order to get where we want to go,” he said. “You can’t lose the special teams battle 2-0 and expect to win any game, so that’s probably the first place we got to clean up.”

The Golden Knights dominated the action through much of the first period and finally got on the board at the 16:59 mark.

Martinez sent a puck soaring from above the faceoff circle, with the shot ticking off Vancouver defenceman Travis Dermott in front of the net before skittering in past Demko.

The equalizer marked Martinez’s first goal of the season.

The Canucks were being outshot 13-5 when the Golden Knights put away the equalizer, forcing Demko to make some big stops.

The all-star goalie robbed Jack Eichel 13:40 into the first, diving across the crease and knocking a shot out of mid-air with his chest to deny the Vegas centre on the back door.

Much of the crowd had barely settled into their seats when the Canucks opened the scoring.

Alex Pietrangelo was called for tripping Horvat just 57 seconds into the game and Vancouver was quick to capitalize on the man advantage.

A quick passing sequence saw J.T. Miller dish the puck to Alex Chiasson at the goal line and Chiasson send it to Horvat at the hash marks. The Canucks captain ripped a snap shot, beating Lehner for his 31st goal of the season.

The tally extended Horvat’s scoring streak to five straight games, with five goals and two assists across the stretch.

The Canucks will continue a five-game homestand Thursday when they host the Arizona Coyotes. The Golden Knights will face the Flames in Calgary the same night.