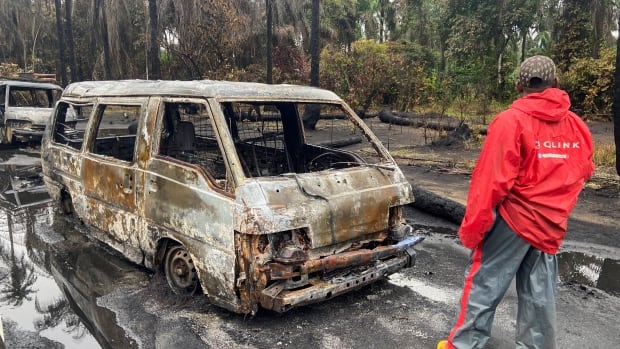 Charred bodies were left scattered among burnt palms, cars and vans on Sunday after a weekend explosion that killed more than 100 people at an illegal oil refining depot on the border of Nigeria’s Rivers and Imo states.

Flip flops, bags and clothing belonging to those who died littered the ground, which was blackened by oil and soot while still emitting smoke in some places despite overnight rain.

“There are so many people that died here. I’m pleading to the government to look into this,” Uche Woke, a commercial bike rider, told Reuters at the scene on Saturday night.

The Nigerian Red Cross Society was on the scene on Sunday to assess the blast, which destroyed a section of the Abaezi forest. It straddles the border of the Ohaji-Egbema Local Government Area of Imo state with Rivers state.

Nigerian President Muhammadu Buhari said in a statement that he would intensify the clampdown on illegal refineries after what he described as a “catastrophe” and “national disaster.”

Unemployment and poverty in the oil producing Niger Delta have made illegal refining attractive, but with often deadly consequences. Crude oil is tapped from a web of pipelines owned by major oil companies and refined in makeshift tanks.

The process has led to fatal accidents and polluted a region already blighted by oil spills in farmland, creeks and lagoons.

The Youths and Environmental Advocacy Centre, a local non-profit organization, said several vehicles that were in a queue to buy illegal fuel were burnt.

“The fire outbreak occurred at an illegal bunkering site and it affected over 100 people,” Goodluck Opiah, the state commissioner for petroleum resources, said of the accident.

The border location is a reaction to a recent crackdown in Rivers on illegal refining in an effort to reduce worsening air pollution.

“In the last month or two, there were several raids and some security agents involved were tackled,” said Ledum Mitee, former president of the Movement for the Survival of the Ogoni People.

At least 25 people, including some children, were killed in an explosion and fire at another illegal refinery in Rivers state in October.

In February, local authorities said they had started a crackdown on the refining of stolen crude, but with little apparent success.

Government officials estimate that Nigeria, Africa’s biggest oil producer and exporter, loses an average of 200,000 barrels of oil per day, more than 10 per cent of production, to illegal tapping or vandalizing of pipelines.

That has forced oil firms to regularly declare force majeure on oil and gas exports.