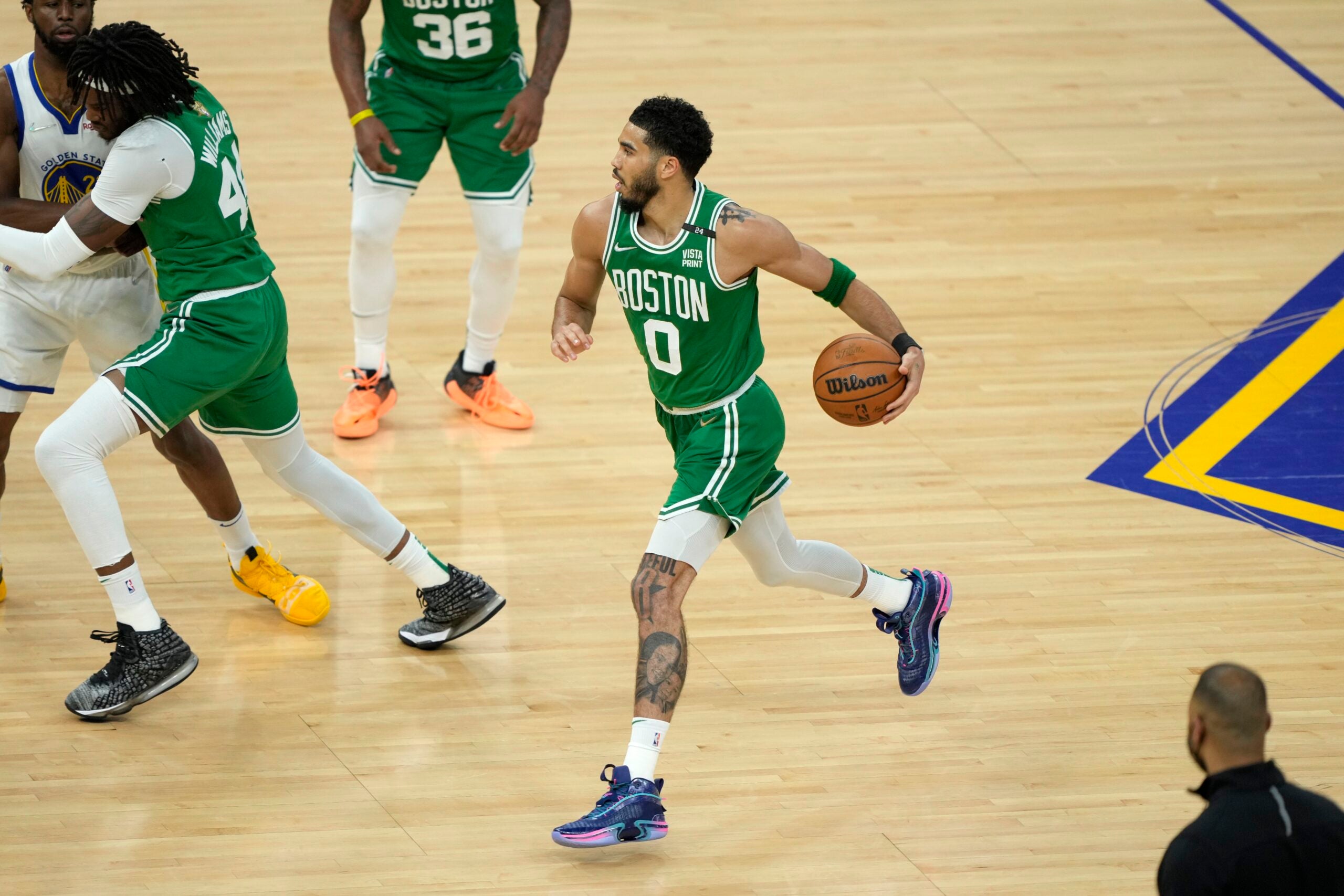 Jayson Tatum’s had a few shooting stinkers so far during the Celtics’ run into the NBA Finals. He added another one in his Finals debut.

Tatum shot 3-for-17 and 1-for-5 from deep in Game 1 against the Warriors. But there was one big difference between his poor shooting performance in Thursday’s Game 1 compared to the ones he had against the Bucks and Heat. Tatum dished out a career-high 13 assists to two turnovers, which helped Boston get the 120-108 Game 1 win in Golden State.

The impressive playmaking performance from Tatum started from the jump. He had three assists in the first quarter and seven at halftime. His decision-making with the ball helped the Celtics in their 40-point fourth quarter, too, with Tatum dishing out four assists in the final 7:09.

Tatum showing impressive decision-making skills through all four quarters is what stood out to Celtics coach Ime Udoka the most.

“We’ve talked about it throughout the year and I’ve talked to him at length about impacting the game when he’s not having his best offensive night,” Udoka said. “So he did that tonight. Obviously going 3-17, that’s usually not going to happen.

“What he did well and did early was get others involved. Seven or nine assists pretty early in the game, finished with 13, and the shots not falling, he still attracts a good amount of attention, made the right plays.

“I love his growth and progression in those areas, where he’s still guarding on the defensive end, still getting others involved, not pouting about his shots, and trying to play through some mistakes and physicality they were playing with him.

“When they went a box-and-one on him to try to take him out, it made it tough at times, but that’s why we’re a team. We don’t rely on one guy. You saw others step up tonight.”

When Udoka was hired to be the Celtics’ coach last June, one of the first things he pointed out was the team’s poor assists numbers from the prior season. In that offseason and into the regular season, Udoka constantly stated one of his main goals was to get Tatum and Jaylen Brown to improve as playmakers.

Tatum recalled how Udoka and the Celtics’ coaching staff helped him improve in that regard.

“Yeah, I think that was kind of his message from day one, just to challenge me to be the best player that I can be and improve other areas of my game,” said Tatum. “We watched a lot of film throughout the course of the season of games, just areas, things I could improve on. You know, obviously, play-making was one. Drawing a lot of attention. Just help the team out as much as possible.

“So he’s done a great job with challenging myself, just the group, in that aspect.”

As the Warriors threw tougher defenses at Tatum, he tried to think one step ahead of them.

“Just reading the play,” Tatum said of how he was able to accumulate assists in Game 1. “They do a great job of helping and things like that. So, you know, obviously it’s just as simple as if you draw two, find somebody that’s open. That’s what I was just trying to do.”

Udoka and Tatum both certainly seemed pleased with the young star’s 13 assists, which were the most by a player in their first Finals game. But Tatum doesn’t “expect to shoot that bad again.” And Udoka still believes that Tatum and the rest of the Celtics can improve from their Game 1 performance.

“It’s a confidence builder because we didn’t play our best at all,” Udoka said. “Obviously Jayson didn’t play his best. Every time we looked up, 32-28 after the first quarter, only down four at halftime. We hadn’t played well at all. They finally stretched the lead a little bit to get it to 92-80 going into the fourth. We had a huge quarter there.

“Knowing what we can do defensively, if we’re a little more tuned in — lack of communication in the first half — I think obviously shows the blueprint for what we can do there. Getting those opening night jitters out, I think that settled some as the game went on. We saw the guys step up.

“We don’t expect JT to have a tough shooting night like that again. I don’t know if you attribute it to jitters, some of the defense they were throwing at him, box-and-one, some of those zones. But it shows what we are, which is a team.”

The TikTok famous Laneige lip sleeping mask is only $14 at…