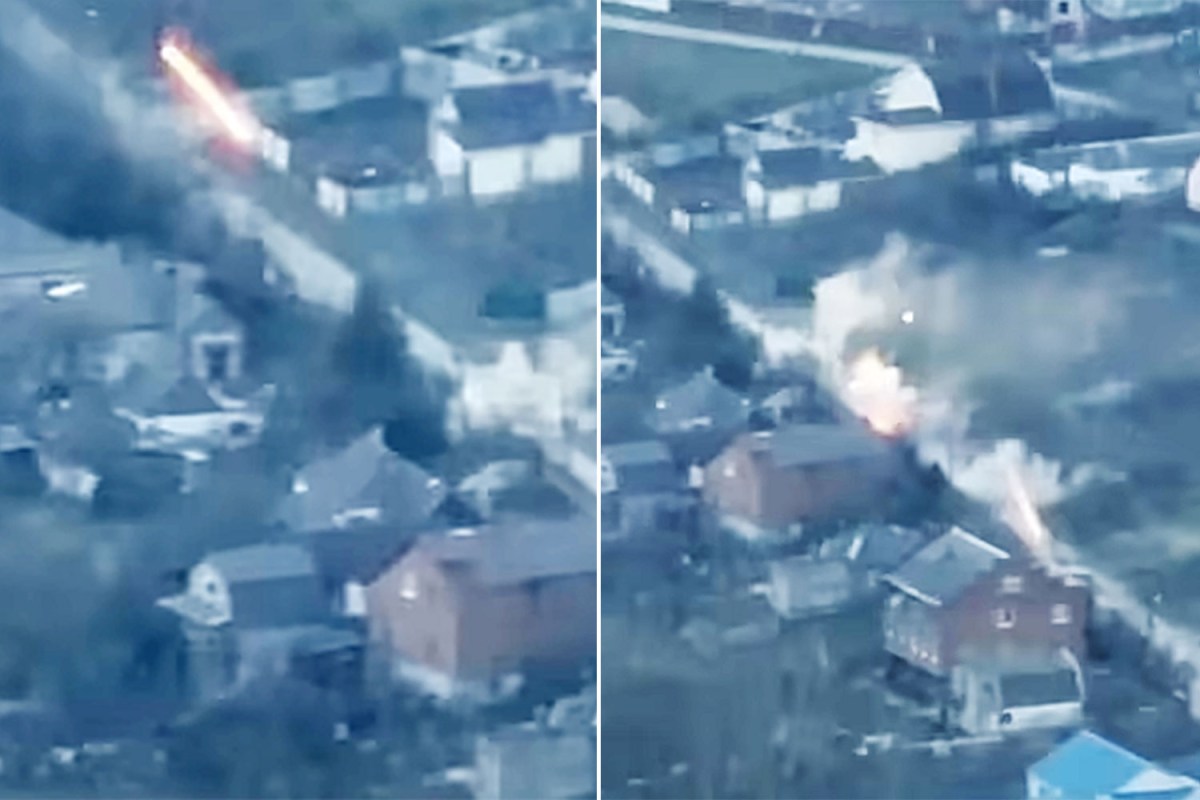 THIS is the incredible moment two Russian tanks are blown to pieces by tracer rounds after being ambushed by a Ukrainian battalion.

Drone footage shows Ukrainian defenders dodging a Russian bombardment as they ran through trenches in Mariupol before counterattacking.

The clip, shared online, claims to show two Russian tanks driving along a residential road on the outskirts of the besieged city.

Moments later, the enemy tanks are hit with two tracer rounds, which explode upon impact. As the tanks attempt to flee, they’re hit again in a second volley of shots.

Troops from the Azov Battalion unleash more rounds into the flaming targets in what appears to be an attempt to ensure the heavy machinery is destroyed.

It comes as Russia completed a pull out of 24,000 troops from Kyiv and Chernihiv in preparation for an major offensive in the country’s east.

Residents in Donetsk, Luhanks, Kharkiv and Mariupol are being told it is their “last chance” to flee before a new bombardment.

Mariupol remains under siege with 170,000 still trapped inside and where civilians deaths are said to have risen to 5,000, including 210 children.

It comes as the war in Ukraine has arrived at a “very precarious point” and that Russians are regrouping for an “overwhelming final attack”, the Chief of the Air Staff has warned.

Sir Mike Wigston insisted the conflict is “far from over” but the next few weeks could be a turning point for the battered nation as Putin’s troops pull back and prepare for their next bloody onslaught.

Speaking to The Sun alongside British RAF personnel heading to Romania for a string of gruelling NATO drills, the UK’s top air chief promised the UK “will be ready” to play our part to help turn the tide.

And he admitted it would be “logistically possible” for Britain to send armoured tanks or other machinery to Ukraine if Boris Johnson gives it the green light.

Yesterday the PM said he is “certainly looking at what more military assistance we can give” as Nato allies considered how to bolster Ukraine’s resistance.

The air chief insisted that the conflict was the biggest realignment of geopolitics since the end of World War II – and European, Russian and world relations would never be the same again.

He said: “These are historic shifts in the geopolitics of Europe – and we are living through it now.

“The geopolitics of Europe have now changed as fundamentally as they did in 1945.”

But he repeated warnings that there are “very good reasons” why NATO allies should resist calls for a no-fly zone over Ukraine as President Zelensky has repeatedly begged the West for.

It would put us in an “uncontrolled escalation” with the potential for a direct conflict with Russia – and British lives on the line – he said.