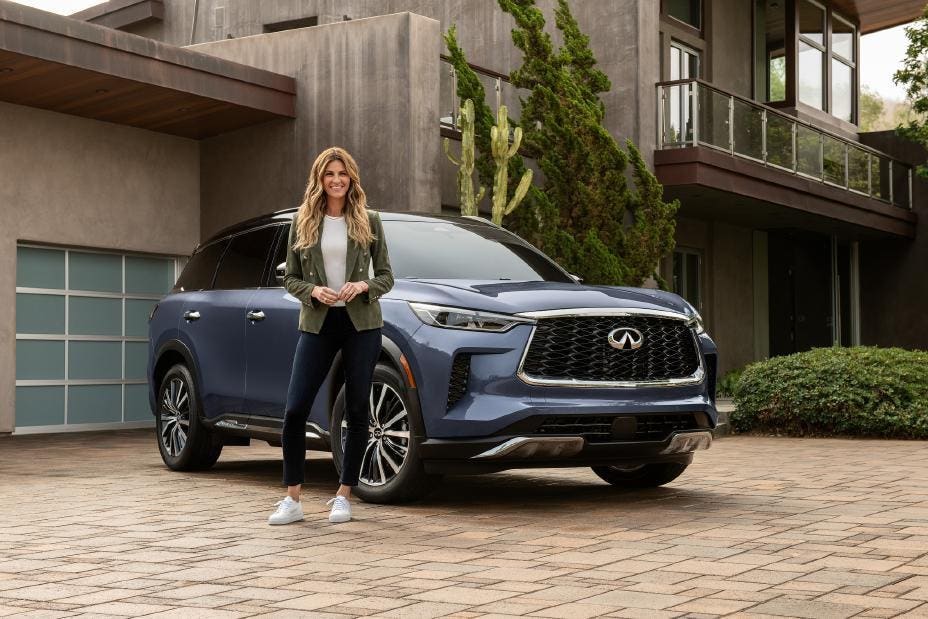 Infiniti faced a quandary when it was going to launch the all-new QX60 three-row SUV: Its target customer was moms, but most people interested in the car were male.

Solution? Recruit Erin Andrews to help out. One of the best known faces in sportscasting (the men side, mostly) is also known as a former long-time host of Dancing with the Stars (more for the women).

“How would we show up for our target customer and speak in her terms, especially when our research showed that relatively few moms were ‘car-interested’?” Shelly Pratt, Infiniti’s director of marketing communications and media, told me. “We looked at Erin Andrews. She was perfect. She’s an entrepreneur. Erin has started her own sports-apparel company. She has the right audience that follows her and is authentic. She has a podcast. She’s a sports commentator. She has a dynamic personality. She’s relevant to males and females.”

Andrews was among a handful of “influencers” that Infiniti introduced to QX60 cold turkey and then turned their initial impressions and responses into social-media material, including this spot with Andrews. In her case they also took what she said and turned it into a TV commercial that has had a long run.

In Andrews’ case, her apparently spontaneous reactions to features in the QX60 included admiration for the luxurious seat stitching, wireless charging (because having to tweet about the latest sports-injury news can chew up battery power), center-console compartment where lipstick could be stashed, and the spacious rear cargo compartment.

“We just started with social media and turned it into a TV ad,” Pratt said. “That’s pretty new for us. The metrics were incredible, how it affected the brand campaign and increased brand favorability and purchase intent and increased the perception of the vehicle by working with her. It helped us reach a new audience because she has a pretty good split between males and females.

More broadly, Infiniti’s “Unscripted” series with Andrews and the others “has changed the way we work with influencers,” Pratt said. “We let them go and create an experience about how the vehicle fits into their life. We give up control. We’re not writing a script. But we found their impressions really favorable. Instead of auto speak and jargon, we flikpped that on its head and they talk with you how you want to be talked with. It’s been quite successful for us.”

Snow Driving With A Polestar 2

Sprintcar national championships roaring back into Perth after three-year hiatus