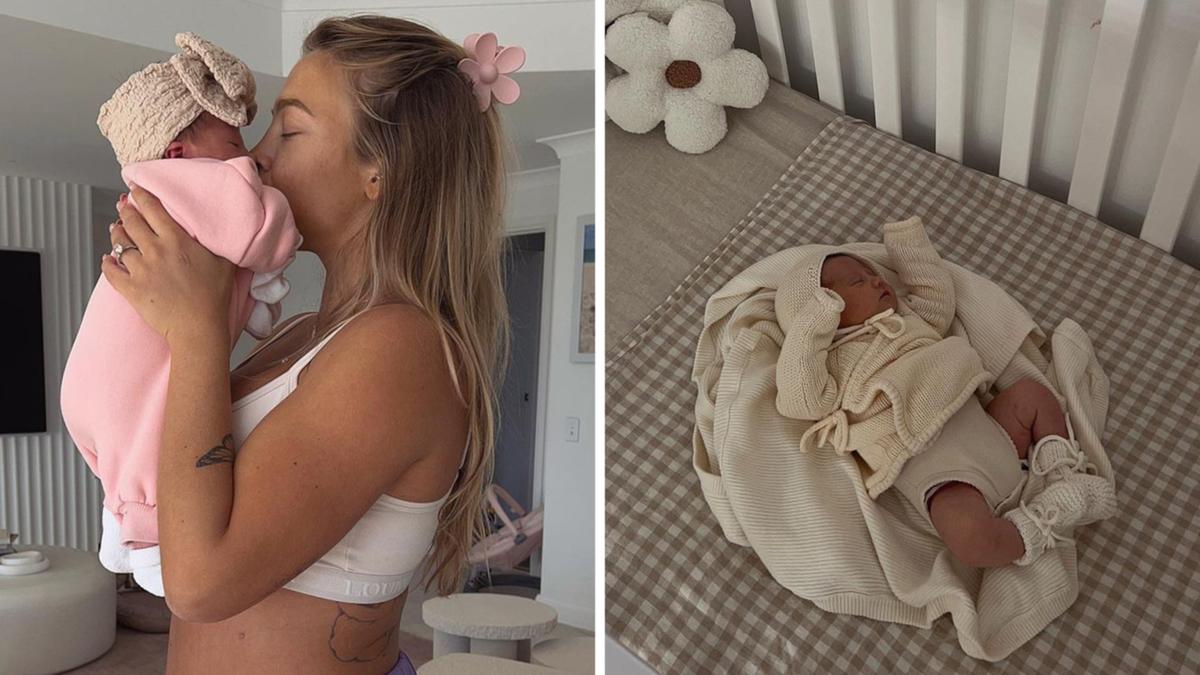 Influencer Tammy Hembrow has announced the name for her baby girl.

The Gold Coast-based mum-of-three gave birth last week with her partner — Ironman Matt Poole — and sisters by her side during labour.

Hembrow said the birth of the the baby girl was her “hardest yet”, but also the most rewarding. She said it was a vaginal birth, after the previous two children were born by caesarean.

“No words. Birth story to come. For now just resting in my love bubble with my perfect little girl wow,” she wrote.

And she finally revealed what she had decided to name her new arrival, choosing a nature-inspired moniker.

Posting a picture of her daughter in her cot, captioning the pic: “Posy”.

The baby girl is her first child with fiance Poole. She has two other children: Wolf and Saskia.

Hembrow gave subtle nods to her choice of name for her newborn, wearing a flower hairclip in her hair in photographs with her earlier this week.

In announcing the name, she also included a picture of flower-shaped cushions in baby Posy’s cot.

And the name appears to have the firm approval of the Hembrow family, with sister Amy replying to the post with “Love you little Posy” and Emilee Hembrow writing: “THE NAME love you miss Posy”.

The sisters were both in the delivery room for the arrival of the newborn.

Proud dad Poole also offered a teary emoji after writing earlier this week how he was besotted with his daughter.

“Our little girl, perfect in every way”.

“Mum was incredible and so strong. It’s been a roller coaster twenty four hours but welcoming her into the world has made everything better”.

Hembrow has also opened up about her difficult birth, telling her Instagram followers on Thursday she was physically exhausted but happy.

“Boobs hurt. Head hurts from no sleep. Vagina hurts from episiotomy (had to get her out quick). Body hurts from blood loss. Don’t know what day or time it is BUT deeply happy in my love bubble,” she wrote.

Hembrow and Poole announced they were expecting in December, and month after they became engaged. Ironman Poole proposed to Hembrow with a diamond ring, worth a rumoured $46,000.

There is no word yet on the baby’s name, but She does have a very rare attribute shared with her mother — six fingers on each hand. Hembrow confirmed that detail to her fans after an ultrasound mid way through her pregnancy.

“The baby has what I had when I was born which is 12 fingers,” Hembrow wrote.

“Six fingers on each hand.”