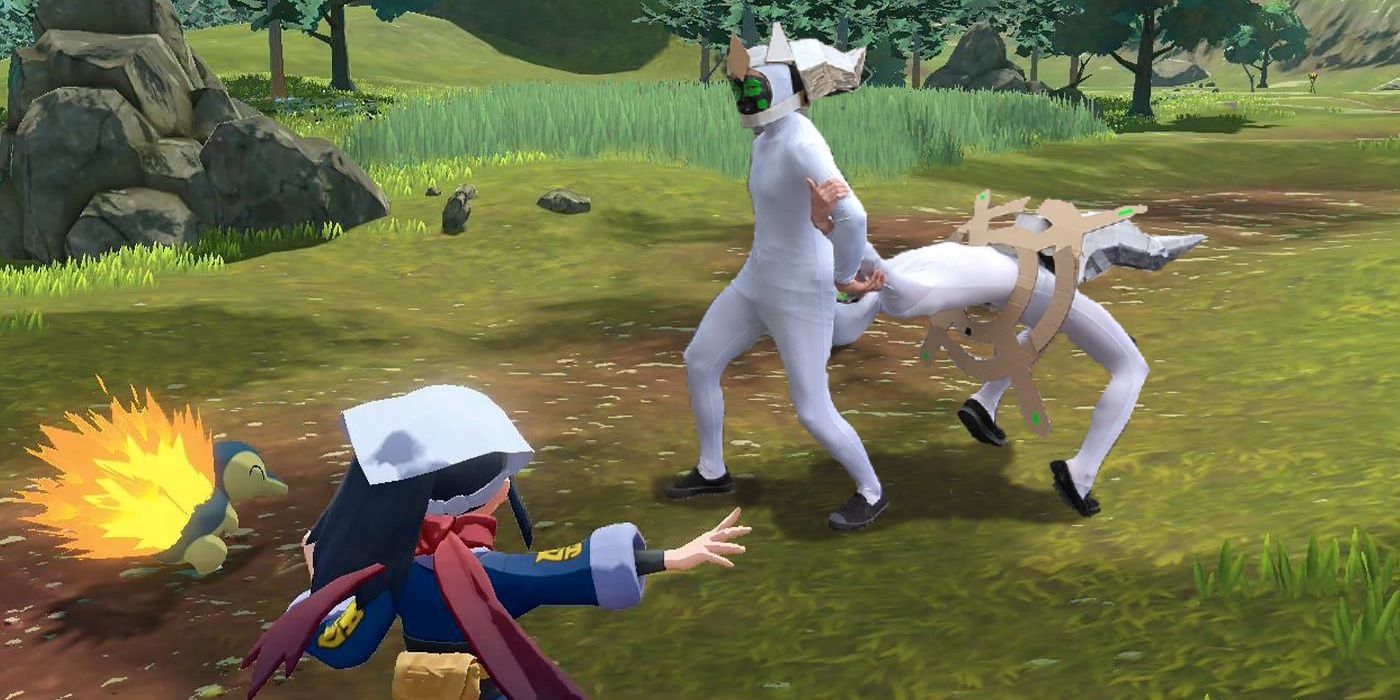 The legendary Pokémon Arceus’ majestic power and elegance have been captured in a unique new cosplay.

The innovative new take on the god-like Pokémon comes from Twitter user @wareketsu and their unnamed cosplay partner. The two-person costume requires one person to recreate Arceus’ back half by literally bending over backwards, while the front-facing cosplayer holds them up by the arms. While the costume, which is mostly made from two white body suits and some cardboard, is obviously not the most screen-accurate rendition of the character, it is a very creative — though potentially uncomfortable — way to portray the four-legged character.

RELATED: Why Pokémon Showdown Is a Vital Tool for Competitive Play

The inventive cosplayers showed off their unique costume during the entrance ceremony for Tama Art University, an art school located in Tokyo, Japan. While the entrance ceremony itself is a traditionally formal event, older members of the student body have gotten into the habit of welcoming their new classmates with imaginative or funny costumes. In a show of the school’s welcoming atmosphere, @wareketu’s unique costume was highlighted by the university’s official Twitter account.

Arceus was originally introduced in Pokémon’s fourth generation, which were remade for the Nintendo Switch in 2021 with the games Pokémon Brilliant Diamond and Shining Pearl. The mythical Pokémon is capable of changing its type by equipping special plates and is said to be the creator of not just the Sinnoh region, but potentially the entire Pokémon universe. The deity-like beast played a central role in the story for 2022’s Pokémon Legends Arceus, where it sends the player back in time from the modern era to the distant past of the Sinnoh region, where humans have only recently figured out how to catch and train Pokémon through the use of Pokéballs.

RELATED: Scarlet & Violet Will Be the Open-World Pokémon Game Fans Have Been Asking For

Pokémon Legends Arceus was lauded by critics for making some substantial changes to the series’ traditional gameplay, which has seen incremental improvements since the franchise’s debut on the original black-and-white Game Boy in 1996. Most notably, Legends Arceus shifted the game’s structure towards a more non-linear style of gameplay with large, open regions to explore. The game also featured new changes to Pokémon’s turn-based battle systems and catching mechanics.

After spending the majority of 2021 celebrating the franchise’s 25th anniversary and looking back on the series’ past, Nintendo and The Pokémon Company recently released the first look at the series’ future with the first trailer for the games’ ninth generation titles, Pokémon Scarlet and Violet. The new games will expand on the gameplay revisions seen in Legends Arceus and are currently scheduled to be released exclusively for the Switch sometime before the end of 2022.

Michael is one of CBR’s Anime News Editors, a Link main in Smash Bros., and once tried to eat 100 tacos in one sitting (He tapped out after about thirty.) After working for several years as a writer and copy editor for companies like an advertising agency and a music label, Michael has come to CBR to pursue his true passion: sharing his love for giant robots and collectible monsters.