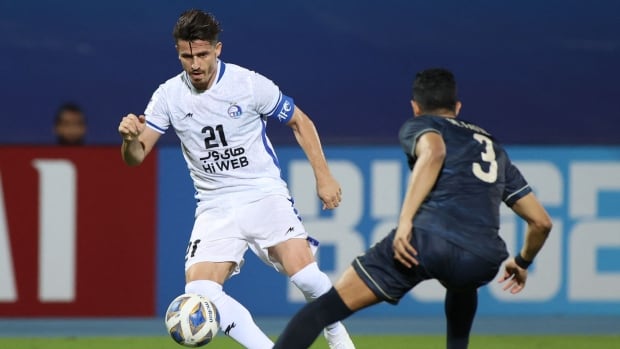 State-linked media in Iran are reporting that Voria Ghafouri, a former member of the country’s national soccer team, has been arrested for criticizing the government.

The semiofficial Fars and Tasnim news agencies reported om Thursday that he was arrested for insulting the national soccer team, which is currently playing in the World Cup, and criticizing the government.

Ghafouri, who was not chosen to go to the World Cup, has been an outspoken critic of Iranian authorities and policies throughout his career.

Iran has been convulsed by anti-government protests for more than two months, the biggest challenge to its Islamic theocracy in more than a decade.

The reports of his arrest came ahead of Friday’s World Cup match between Iran and Wales. At Iran’s opening match against England, the members of the Iranian national team declined to sing along to the national anthem and some fans protested during the match.

The protests were ignited by the death of a 22-year-old Iranian Kurdish woman in the custody of the country’s morality police in September. They rapidly escalated into nationwide demonstrations calling for the overthrow of the Islamic Republic. The western Kurdish region of the country has seen particularly intense protests and a deadly crackdown by security forces.

Ghafouri, who is also a member of Iran’s Kurdish minority, has criticized government policies in the past. Officials have not said whether that was a factor in not choosing him for the national team.

France’s sports minister has encouraged her country’s World Cup team to make a symbolic gesture in support of human rights, after FIFA’s clampdown on the “One Love” armband.

“Is there still a way our French team can continue to express its commitment to human rights? The answer is yes,” Amelie Oudea-Castera told French television channel Public Senat. “The Germans showed it.”

Germany’s players covered their mouths for the team photo before their opening World Cup match on Wednesday. The gesture was a response to FIFA’s effective nixing of seven European teams’ plans to wear armbands that were seen as a rebuke to host nation Qatar and its human rights record.

French players will be “free to express themselves,” in the coming weeks, Oudea-Castera said. “They share these values too … and it’s important that they represent them.”

The French team released a statement before flying to Qatar, saying the players supported NGO’s working to protect human rights and that all the players and staff members had made a collective donation toward them.

“The players have already made a statement saying how we feel,” France midfielder Matteo Guendouzi said Thursday in Qatar. “We’re not indifferent about this situation. But we’re here to play football and enjoy ourselves on the field.”

Forward Marcus Thuram said he respected what the Germans did.

“As Matteo said we have done something [with a donation],” Thuram said. “If they think they defended a good cause then that’s a good thing.”

It was uncharted territory for the Israeli journalist. Wandering through the rustic outdoor marketplace in Doha before the start of the World Cup, he zeroed in on a Qatari man in his traditional headdress and white flowing robe and asked for an interview.

“Which channel?” the Qatari asked. The journalist replied he was from Kan, Israel’s public broadcaster.

The Qatari was stunned. “Where?”

“Israel,” the journalist repeated. A split-second later, the interview was over.

The exchange ricocheted around social media, reflecting the latest political flash point at the first World Cup in the Arab world — never mind that neither Israeli nor Palestinian national teams are competing in the tournament.

Arab football fans are refusing to speak to Israeli reporters during the Qatar World Cup in solidarity with the Palestinian cause. <br><br>Some fans also waved the Palestinian flag behind reporters <a href=”https://t.co/oGlMPb98jw”>pic.twitter.com/oGlMPb98jw</a>

Controversy has followed Israelis and Palestinians pouring into Doha, revealing just how entrenched and emotive their violent century-old conflict remains, including Israel’s open-ended occupation of lands Palestinians want for a future state.

Palestinians shared footage of the Doha encounter between the Qatari man and the Israeli journalist, along with other clips of Palestinians and Qataris angrily confronting Israeli reporters live on TV. They viewed it as proof that although Qatar has permitted Israelis to fly directly to Doha and receive consular support for the first time in history, the conservative Muslim emirate has no intention of cozying up to Israel.

Israel’s Channel 13 sports reporter, Tal Shorrer, said he has been shoved, insulted and accosted by Palestinians and other Arab fans during his live reports from the tournament.

“You are killing babies!” a few Arab fans yelled as they rammed into him during a broadcast this week.

Qatari media meanwhile has published some such videos with the caption: “No to normalization.” Officials in Qatar, with their history of public support to Palestinians, have insisted the temporary opening to Israelis was purely to comply with FIFA hosting requirements — not a step to normalizing ties like neighbouring Bahrain and the United Arab Emirates did in 2020. Qatar has warned a spike in violence in the occupied West Bank or Gaza Strip would derail the arrangement.

Nonetheless, thousands of Israeli soccer fans are expected to descend on Doha for the World Cup, diplomats say, including some on 10 direct flights planned over the next month.

Mother of officer Brian Sicknick who died in Capitol riot…