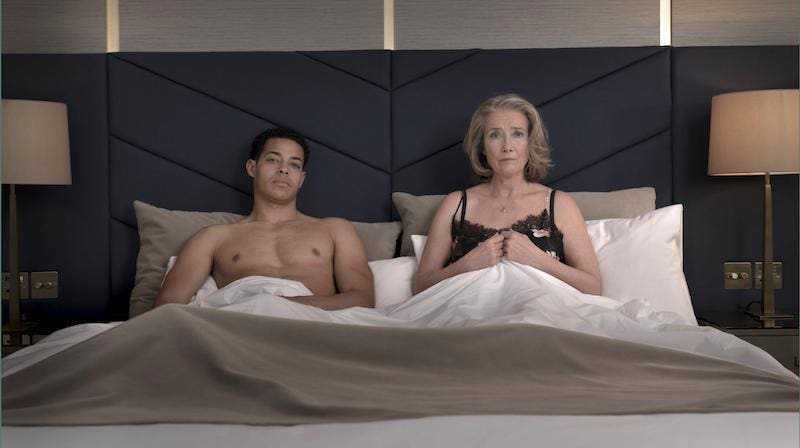 Irish actor Daryl McCormack has been building a career for a few years now, mostly gaining notoriety in Britain, having taken over the role of Isaiah Jesus—the preacher’s son—in the popular series, Peaky Blinders, in season five, which he reprised in season six.

McCormack finds himself on the precipice of international fame as he co-stars opposite two-time Oscar winner Emma Thompson in Good Luck To You, Leo Grande, a sexy romp about a widow “of a certain age” discovering her sexuality and pleasure with a much younger man who can show her the ropes after a lifetime of mundane sex with her husband.

McCormack plays a compassionate and charismatic sex worker who is hired by Thompson’s retired widowed teacher Nancy to unleash her hidden desires. They meet up in a hotel room she’s reserved for a couple of hours of hot, steamy sex with Leo, whom she’s found through an app. Problem is, the middle-aged mother of two adult children can’t quite get over her own anxiety about engaging in such unbridled sexual pleasure, so it takes Leo some careful coaxing to get her to relax, which is easier said than done.

Initially, Nancy would rather talk about her children and her past boring sex life than actually engage in what she’s paid for. A naturally curious person, she wants to know more about Leo—if that’s his real name—and his background, which he is not inclined to divulge. After a rough start, the two meet again at the hotel room for a second try, and this time around Nancy is more determined, if not completely relaxed. Over the course of their various sessions, each gains a better understanding of the other as well as themselves. Ultimately, it comes down to a universal need for human connection.

Good Luck To You, Leo Grande is directed by Australian filmmaker Sophie Hyde from a screenplay by Katy Brand, who appeared alongside Thompson in the children’s comedy Nanny McPhee Returns.

McCormack spoke via Zoom about his starring role and working opposite a legendary actress from—where else—a hotel room.

Angela Dawson: Tell me about working on this together with much of the action and dialogue taking place in this one hotel room set. What was the introductory process into the film for you and Emma?

Daryl McCormack: I met Emma just briefly before being cast. That was the first step of the whole process. Just to know, as people, that we could feel comfortable around each other and that we could trust each other.

It was really apparent to both of us how much we would have needed each other to make this film. That element of trust was really crucial.

Then we had a six-day rehearsal prior to shooting the film, which we shot in 18 days. That rehearsal period was super-necessary and fundamental to us growing that bond and growing that relationship. On top of that, we just had so many circumstances that aligned with us to really grow closer and closer. We only lived 15 minutes away from the set so we’d walk every morning to work and then walk back (at the end of the day). We just made it our mission to stay in that cocoon and that sense of closeness.

Also, we were in the middle of a lockdown so we really had no other choice but to kind of be in each other’s presence quite a bit.

Dawson: Did you have the luxury of being able to shoot this chronologically or did you switch around in various stages of their relationship?

McCormack: It was pretty much full chronological the way we shot apart from maybe the scene in the hotel (cafe). We jumped that a bit forward but everything else was (shot) chronological.

I really feel like we might not have been able to make the film in another way because there’s a big emotional landscape throughout the film and those changes are really important to seeing the entire journey. They’re very subtly written in by our writer Katy Brand. I feel if we were to have jumped around out of chronological order, to access that emotional arc would have been very very challenging. So, the circumstances really aided to do justice to the script.

Dawson: What’s interesting about your characters are the arcs that each goes through. Leo seems so comfortable in what he does and tries to make Nancy feel comfortable in an awkward situation for her. Nancy is comfortable sharing with Leo intimate details of her personal life, while he is not comfortable revealing anything about his past. Plus, there’s the generation differences of these two people. How did you feel about that aspect?

McCormack: I felt that aspect of how much we show and how much we hide was something interesting in Leo because he’s in a professional environment. (The hotel room) is his workspace. I think he is very confident in what he does because he has, in a sense, a calling to do what he does. I think he would have had enough experience to develop a capacity to do it so well. So, it was fun expressing that confidence.

What I really loved about Leo was that despite being such a confident man he also was wounded at some point in his life. I think it’s when Nancy tries to prod and become curious about where that wound is and sees an element (of him) trying to keep the mask up, that was extremely fun to play. I just love it when there are two things going on at once. It just made Leo a little more multi-dimensional for me.

Dawson: Are you as comfortable in your body as Leo appears to be in his?

McCormack: I try to be but I’m not as comfortable in it as he is. I try to share some of those thoughts. The idea that the body has so much more use than just vanity or what we feel like what it should look like. I think he has an incredible understanding of that. I’m trying to get there like anyone else.

We live in a world that very much tries to tell us how we should feel about our body, depending on how it looks. I just think that’s quite crippling and damaging. But, yeah, I would say I share similar thoughts.

Dawson: Did you have a special workout or diet?

McCormack: Yeah. It’s in the script. There’s a moment where she touches him and says, “I’ve never felt anyone like you—someone muscular, someone fit.” So, I don’t want to show up as an actor and not be able to tell the whole truth. I knew I had to get into a place with regards to my fitness that represented that moment. It was simple, though. It was just a matter of upping my calorie intake just so that I could grow a bit bigger and work out.

I was actually in lockdown at the time so I had dumbbells in my room and lifting weights there and going for runs. My housemate at the time used to be an Olympic boxer so he actually helped me as well. We would go on runs and do some boxing workouts. It was important for me to show up fully as Leo and getting into shape was definitely part of that process.

Ukraine-Russia war: NATO will increase its forces on the eastern flank