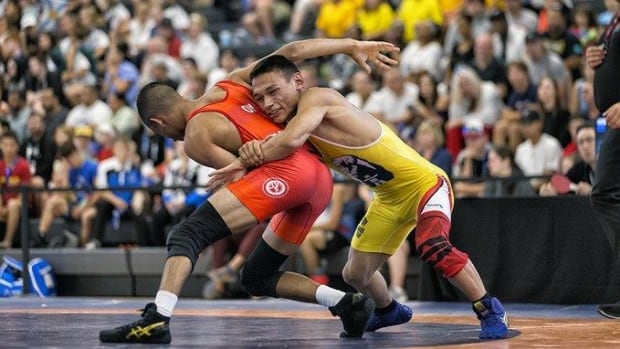 When wrestler Eekeeluak Avalak won Nunavut’s first gold medal at the Canada Summer Games, he says he channeled strength from his coach, his family, his territory and his ancestors.

Avalak, 18, of Cambridge Bay, won his place in the history books on Thursday when he defeated Alberta’s Fred Calingay 10-1. He’s the second athlete from Nunavut to win a medal at the Canada Games, and the first to secure gold.

In an emotional moment after his victory, Avalak tearfully held his longtime coach and mentor Chris Crooks. Then he dedicated his victory to his late brother Joanasie, whose memory, he says, fuelled him.

Medal in hand, he spoke to As It Happens guest host Paul Hunter on Friday. Here is part of their conversation.

First off, big congratulations on winning Nunavut’s first-ever gold medal at the Canada Summer Games. How are you feeling?

I’m feeling good. Yeah, it feels nice to be a part of history and being able to represent not only my territory, but my family name.

There’s a photo … taken just after the match, and you’re hugging your coach, Chris Crooks. And the look on your face just says it all. I think you’re in tears, but you look in just this state of ecstasy.

How [did] the support of your coach … get you to this point?

It was a huge part of it. Him and his wife took me under their wing nearly two years ago, and we’ve had many talks through the highs and the lows. And without him — and, of course, everyone else around me — this wouldn’t have been possible.

One of the things that I find so impressive about top athletes, such as yourself, is the ability to focus. So going into the fight, knowing you could soon be Nunavut’s first gold medallist, how are you feeling at that point?

I wasn’t trying to think of the gold medal during the match. I was just thinking: Go in there, fight, keep taking the centre, and show him, hey, this is going to be my moment and you’re not going to take it away. And that’s exactly what I did, and I came out on top.

And how were you feeling as the fight went on? Did your confidence continue to grow as time passed?

As time passed [and] the time limit shortened, of course my confidence grew. Like I said, I just had to keep my composure and I just had to let him know: Hey, I’m here to fight. And I’m here to have fun and show him whose mat it was, and whose moment it was. And it was my moment, and it was all of Nunavut’s moment.

What’s your strength as a wrestler? What makes you so good at this?

I just think of my ancestors. Like, they lived in one of the harshest conditions ever in the world…. All I had to do was keep my composure for that six whole minutes. And compare that to what my ancestors had to do, that was — I wouldn’t say it’s easy, but it’s not as hard as what they had to go through.

So that was one of my strengths. Another strength was thinking of my late brother. It was his birthday six days ago and I just thought of what would he want me doing. And that gave me some strength, some more strength, into being able to fight through that match.

I saw the interview you gave right after winning, in which you dedicated your win to your brother. And I know it’s tough to talk about, but how much did his memory help you in achieving this?

It played a big role in there. He always had a smile on his face and he was very charismatic. And [I knew] that he would want me to focus on my wrestling and [being] good at what I do.

And I came out on top. And as soon as the match was over, I ran to my coach and then I just let all the emotions out. That’s when I was able to let them out. So I’m feeling a lot better.

What do you think your brother would say about what you’ve achieved?

He’d definitely give me a big hug, tell me he loves me and is very proud of me. And he would tell me to just keep doing what I am doing, and pursue my dreams.

I wonder what message you hope your achievement sends to others in Nunavut — athletes and non-athletes — about the ability to succeed?

You’re always going to hit bumps and you’re going to fall down, but keep getting up because it’ll be worth it in the end, trust me. I hope to inspire others. And if I can change, so can anyone else. It’s never too late.

Fantastic. Tell me, since it’s in your hand, what does it look like?

But like my coach says, if you’re nothing without the medal, you’ll never be anything [with] the medal.

The medal is just a bonus for me. The real victory for me is inspiring people.

Written by Sheena Goodyear with files from CBC North. Interview produced by Aloysius Wong. Q&A has been edited for length and clarity.

Alexa has seen me naked, and that’s okay

Six players yet to prove themselves