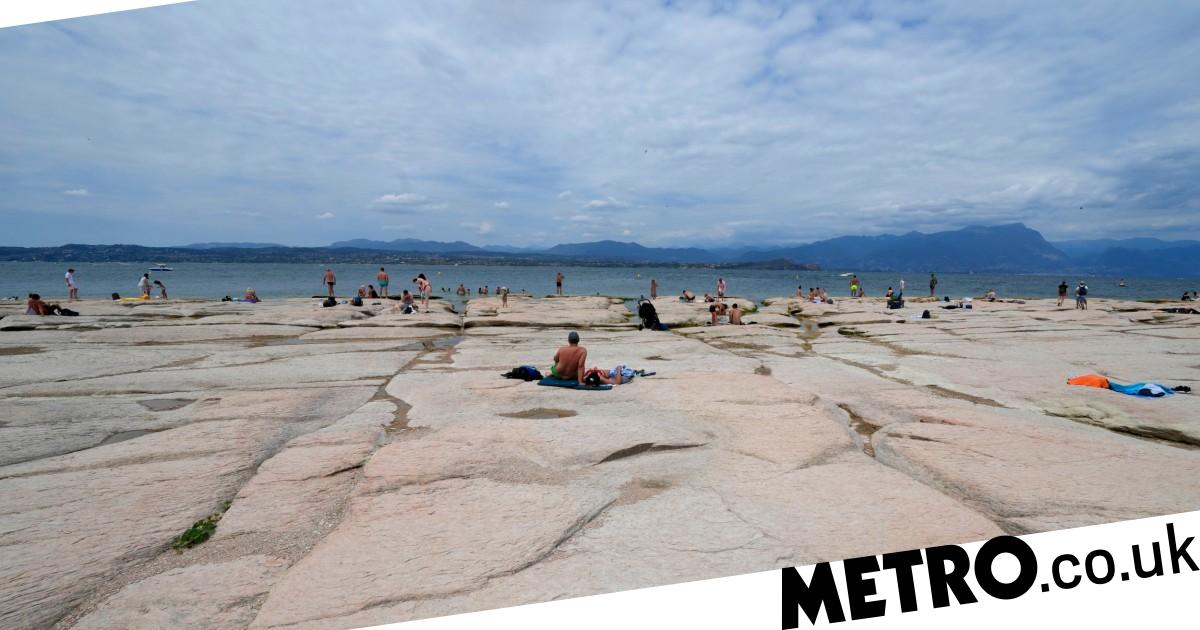 Italy’s worst drought in decades has seen its largest body of water, Lake Garda, recede to near-historically low levels, exposing swathes of underwater rocks and raising water temperatures close to those found in the Caribbean Sea.

Tourists flocking to the popular holiday spot this weekend were met with a strange sight upon arrival.

Rather than being greeted by Garda’s gorgeous natural shoreline, holidaymakers instead arrived to find an expansive stretch of bleached rocks ringing the southern Sirmione Peninsula.

‘We came last year, we liked it, and we came back this year,’ tourist Beatrice Masi said as she sat on the rocks.

‘We found the landscape had changed a lot. We were a bit shocked when we arrived because we had our usual walk around, and the water wasn’t there.’

Northern Italy has been scorched by intense heatwaves for months, with a complete lack of rain and up to 70% less snowfall during the winter resulting in important rivers like the Po, which flows throughout much of Italy’s agricultural heartlands, almost totally dry up.

The parched condition of the Po, Italy’s longest river, has already caused billions of euros in losses to farmers who normally rely on it to irrigate fields and rice paddies.

To compensate for the losses, Italian authorities allowed reserves from nearby Lake Garda to be drained in order to flow out to local rivers — 70 cubic metres (2,472 cubic feet) of water per second.

But in late July, after the lake’s water levels dropped close to the record lows of 2003 and 2007, the amount of water exported was reduced in order to protect the lake and the financially important tourism tied to it.

Although the country has seen some rainfall in recent months, it was not sufficient to make up for the losses, prompting the decision.

Garda Mayor Davide Bedinelli said he had to protect both farmers and the tourist industry, and insisted that despite cancellations from German tourists during Italy’s latest heatwave in July that the summer tourist season was going better than expected.

‘Drought is a fact that we have to deal with this year, but the tourist season is in no danger,’ Bendinelli wrote in a July 20 Facebook post.

He confirmed the lake was losing two centimetres (.78 inches) of water a day.

The lake’s temperature has also been on the rise. On Friday, the Garda’s water was nearly 26C, several degrees warmer than the average August temperature of 22C and nearing the Caribbean Sea’s average of around 27C.

For Mario Treccani, who owns a lakefront concession of beach chairs and umbrellas, the lake’s expanded shoreline means fewer people are renting his chairs since there are now plenty of rocks on which to sunbathe.

‘The lake is usually a metre or more than a metre higher,’ he said from the rocks.

Pointing to a small wall that usually blocks the water from the beach chairs, he recalled that on windy days, sometimes waves from the lake would splash up onto the tourists.

‘It is a bit sad. Before, you could hear the noise of the waves breaking up here. Now, you don’t hear anything,’ he said.

Karan Johar Defends His Relationship with Alia Bhatt, ‘I Don’t Know Why People Get Annoyed’