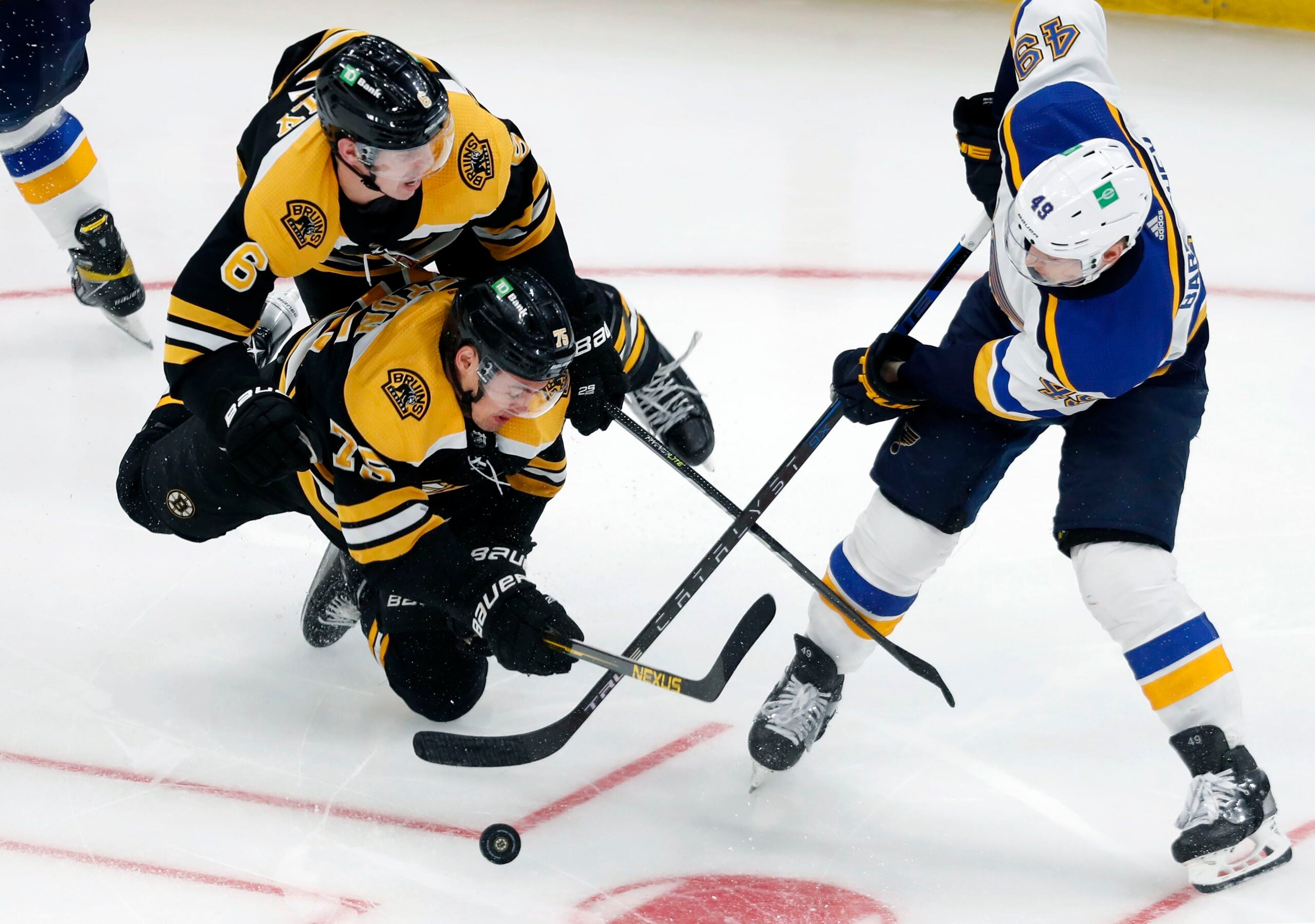 The Boston Bruins developed a case of self-inflicted Blues during Torey Krug’s return to Boston.

Billerica’s own and former Boston College Eagle Marc McLaughlin gave the Bruins a 2-1 lead with his second career tally with 3:01 remaining in the opening stanza.

Even with Brandon Carlo exiting to injury, the Bruins carried their momentum into the early portions of the second period, generating more quality scoring chances on Ville Husso. But they started to unravel after Trent Frederic committed a head-scratching and untimely penalty during his exchange with Vladimir Tarasenko.

The Blues took advantage of the opening with Krug netting the equalizer on the ensuing power play. Then they squeezed the life out of a shorthanded Bruins bunch after a pair of Tarasenko lamplighters off odd-man rushes late in the second and early in the final stanza.

Without three of their top-four blue-liners and their top goal-scorer, the Bruins hardly established any pushback in the final moments, ultimately succumbing to the Blues.

“It’s just really not very intelligent hockey,” an upset Bruce Cassidy said postgame. “We shot ourselves in the foot and couldn’t recover against a good hockey club. I’ve seen this before, but I haven’t seen it in a while.”

Here’s what we learned from Boston’s 4-2 setback at TD Garden.

“I thought we had a good start,” McLaughlin said. “And then we just got away from our game a bit.”

More often than not, Boston’s bench boss often goes in-depth with the media regarding his decisions.

This time, he only needed two words to express his frustrations with Frederic taking a run at Tarasenko during his ill-timed second-period penalty.

Cassidy put Frederic in his doghouse afterward. He only skated for a pair of shifts with his fellow linemates Charlie Coyle and Craig Smith late in the third period after spending over 20 minutes of game time on the bench following his roughing minor.

The Blues were off and running following Frederic’s penalty. While the Bruins committed several self-inflicted mistakes throughout the night — including an instance where Coyle tried to protect the puck at the blue-line instead of shooting it toward the net leading to another odd-man rush on Tarasenko’s second goal — the Frederic penalty became the turning point.

The frequent odd-man rushes put Jeremy Swayman in a tough spot. He tracked the puck well and limited his rebound control after a recent rough stretch, yet Boston’s D hung him out to dry against a red-hot St. Louis bunch.

The Bruins needed more out of their shorthanded roster to down the Blues. But they also wasted another pair of opportunities to at least keep momentum on their side when they were a man-up.

The struggling power play was “selfish.”

A once potent weapon transitioned into a powerless commodity over the last week.

If their 0-for-16 power-play showing during their four-game road trip wasn’t bad enough, the Bruins somehow managed to make things even worse with Tuesday’s 0-for-2 outing.

Aside from Brad Marchand hitting the post on their first power-play attempt, the Bruins hardly generated quality looks against Husso. They only fired three shots on net in their two attempts with the man advantage, opting to look for the perfect play instead of firing pucks toward goal and generating secondary looks.

“Lack of execution,” Cassidy said of the power play issues. “I think we’re selfish. Guys are holding the puck too long, looking to make the play instead of letting the puck do the work. I think those two things are fairly evident.”

Indeed, the top power-play unit doesn’t have their bread and butter play with Pastrnak’s one-timer at the current juncture. With that in mind, the penalty-killing units turn to stopping the secondary option of Marchand feeding Bergeron from the half-wall to the bumper.

Amid their troubling trends, however, the Bruins have one pivotal development above all else, with nine games remaining in the regular season.

For the most part, the Bruins escaped significant injury stretches with their core players in 2021-22. Aside from the COVID pause earlier in the year, they’ve embarked on their most challenging injury and illness timeframe yet.

Pastrnak, Hampus Lindholm and Matt Grzelcyk all sustained their respective wounds during the four-game road trip. They nearly had another scare with Carlo following a Lars Eller hit in Sunday’s 4-2 loss to the Capitals, but the Colorado Springs native didn’t miss a shift.

Carlo wasn’t so fortunate this time around after exiting in the first period against the Blues. The Bruins didn’t have a definitive update on Carlo’s specific injury or prognosis afterward.

“He left, and he wasn’t feeling good midway through the first,” Cassidy said of Carlo’s exit postgame. “I guess he’ll be re-evaluated tonight or tomorrow; I haven’t heard…”

The Bruins didn’t have Carlo’s services in the latter half of their second-round series against the Islanders last postseason. The right-side options behind Carlo again remain thin. Connor Clifton and Josh Brown both serve best in a third-pairing role and the pipeline in Providence hardly has any suitable right-shot blue-liners to choose from.

Come Thursday, the Bruins could have three of their top four defensemen and their leading goal scorer out of the lineup in their matchup with the lowly Ottawa Senators. But any result remains secondary given their slew of injuries of late.

Cassidy and company will embark on a tough first-round matchup. The last thing they need is a shorthanded start to their postseason.

Get breaking news and analysis delivered to your inbox during hockey season.

Global COVID-19 decline ‘should be interpreted with caution’: WHO – National

Pictured: The amazing UFO-style floating hotel suite that comes with a retractable roof and a motor

Nintendo Shuts Down Smash World Tour ‘Without Any…

Trump Ex-Chief of Staff Mark Meadows Ordered to Testify in…