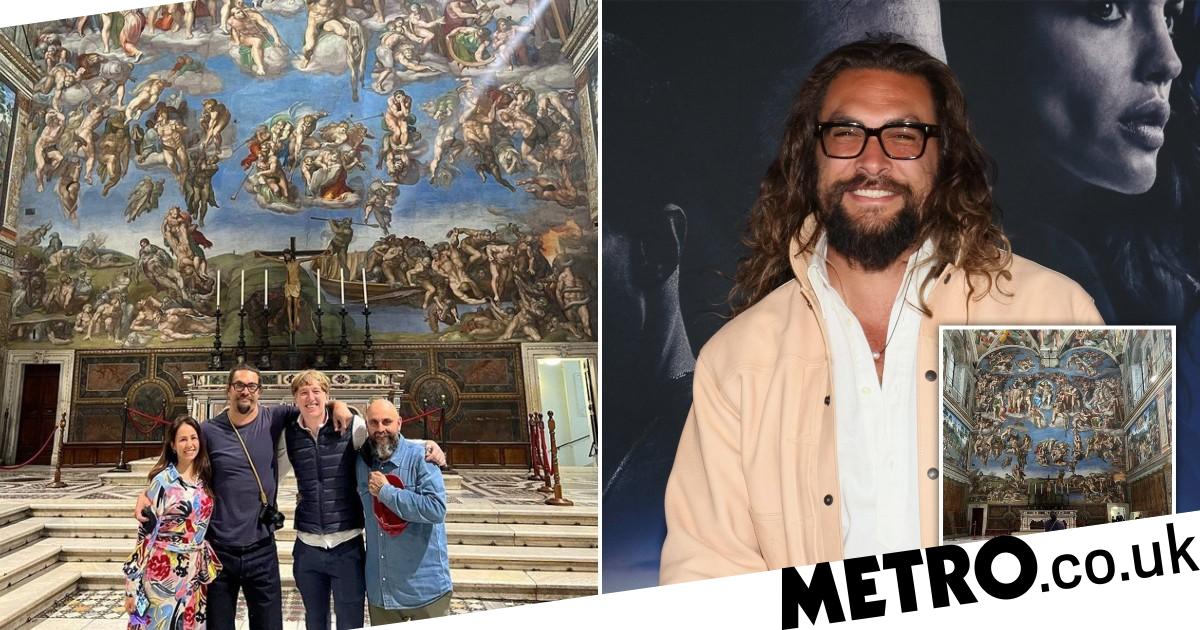 Jason Momoa has apologised for taking photographs inside the Vatican while working in Italy.

The Aquaman star has spent the month of May in Rome filming the upcoming Fast and the Furious 10, set for release next year.

During his work trip, Jason has been spotted revving a motorbike on the cobbled streets and hanging out with co-star Charlize Theron.

Last week, while on a day off from filming, the 42-year-old actor visited the world-famous Sistine Chapel in Vatican Cit, home of Pope Francis.

Photographs are generally not allowed in the chapel, in part to protect the artwork, however Jason later uploaded several photographs of him posing with others in the chapel.

Now the star has apologised, via a video shared with JustJared, and insisted ‘if you ever felt that I disrespected your culture, it wasn’t my intention.

Jason explained that he gave ‘a wonderful donation’ to be able to bring his friends and some Fast X crew to the Sistine Chapel ‘because we only had a couple days off to experience these places’.

He added that, when he was there he ‘found people wanted to take pictures with me,’ which he described as ‘odd’.

‘During a trip to the Vatican with all this wonder and they want to take pictures with me, which I don’t get, but regardless, I did,’ Jason said.

He insisted he was ‘was very respectful and I asked for permission… I would never want to do anything to disrespect someone’s culture.’

Explaining that he ‘paid to have that private moment’ with a ‘nice donation’ to the church, he told fans: ‘I love you. I’m sorry if I offended you.’

Filming in Rome for Fast X has since wrapped, after an intense couple of weeks on set.

Jason was seen riding a black and red motorbike down a cobbled street down the Italian capital earlier in May, later seen removing his jacket to reveal a black vest, silver chains and his trademark family crest arm tattoo.

He recently revealed that he will be playing a ‘bad guy’ in the latest film, though his character’s name and other details have yet to be released.

Co-star Charlize, who is reprising her role as Cipher in the movie, recently shared the first pictures from the set on Instagram, which included a black and white photo of her hugging Jasonin-between takes.

Fast X is due for release in 2023 with returning stars Vin, Charlize, Michelle Rodriguez, Ludacris, Tyrese Gibson and Jordana Brewster.

It’s being reported that Marvel’s Louis Leterrier will take over as director following Justin Lin’s exit.


MORE : Charlize Theron and Jason Momoa arrive on Fast and Furious 10 set: ‘Look who decided to join the party’