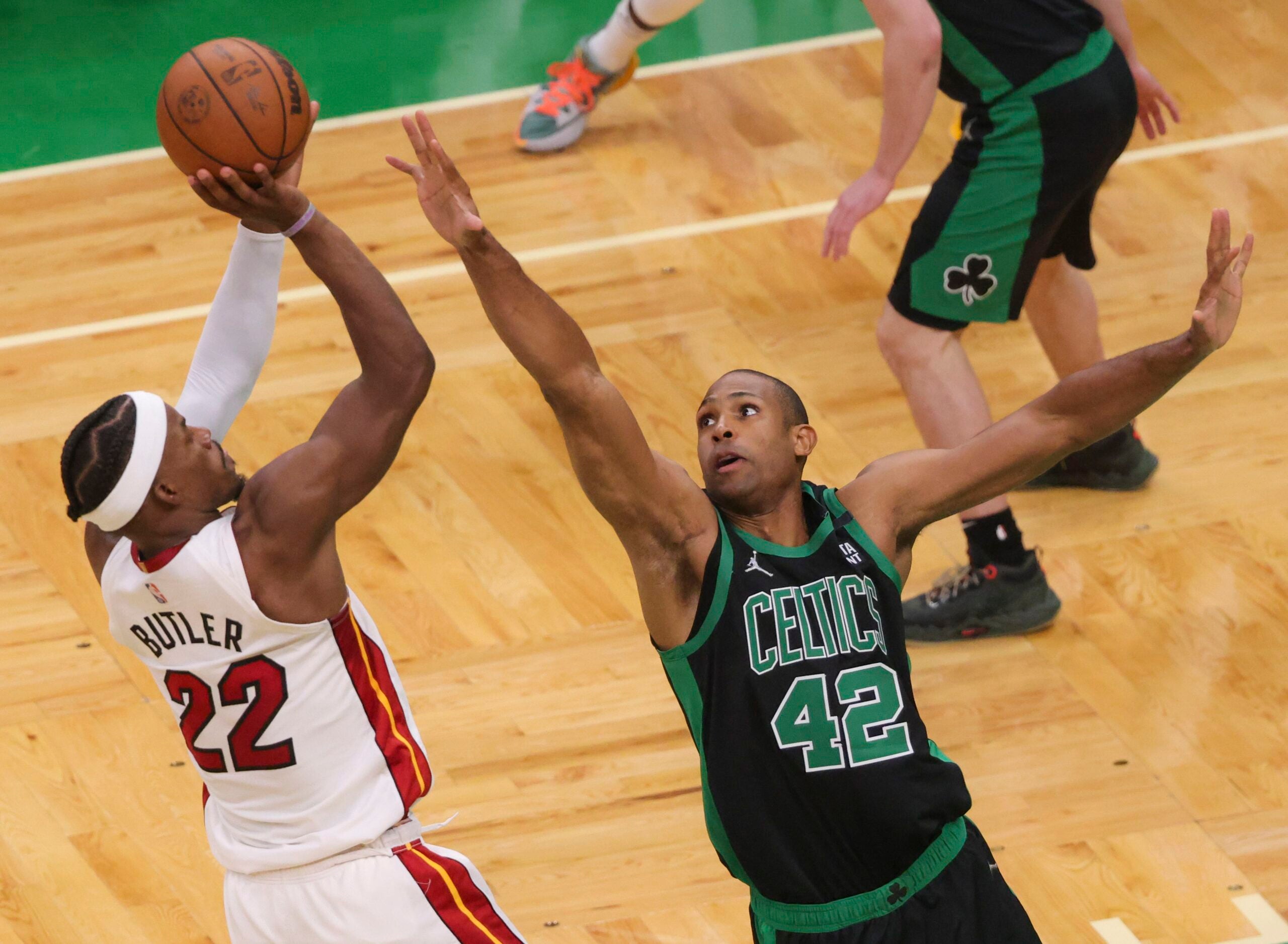 Here are your live updates as the Celtics look to advance to the NBA Finals at home in Game 6 of the Eastern Conference finals against the Heat.

If you want less formal takes and many more sentences that end in “lol,” please feel free to follow me on Twitter: @Tom_NBA.

9:30 – Derrick White has done everything the Celtics need at all of the most important moments over the last few games. A 3-pointer and a tough floater have the Celtics within four again when the Heat looked like they might pull away.

11:15 – Ime Udoka used his challenge less than a minute into the fourth quarter on a pretty transparently doomed foul call against Grant Williams. Udoka has been phenomenal in the playoffs at essentially everything except for challenge foul calls.

1:00 – Max Strus is killing the Celtics with momentum-killing 3-pointers. On his last make of the third quarter, the Celtics got into rotation, and he ended up being the open man, which was a killer. The Heat are 13-for-30 from deep, while the Celtics are 7-for-23.

4:09 – The Celtics answered a 12-point deficit with a 6-0 run, capped off by a beautiful lob from Jaylen Brown to Robert Williams. Most importantly (by far), they didn’t turn the ball over and they defended like crazy. The Heat feel like they have control of this game, but the Celtics really do have a clear route to victory … if they can stay on it.

7:07 – A brief list of the chaotic plays that happened in the first five minutes of the third quarter:

A chaotic start to the third quarter benefits the Heat tremendously.

The Celtics didn’t have a disaster of a first half, but they led by four at one point with a chance for more, but Tatum missed a 3-pointer that would have pushed the lead to seven, and Butler closed the first half on a tear.

The Heat are stringing together just enough offense to stay alive. The Celtics have 24 minutes to clinch a trip to the Finals from the comfort of home.

3:05 – The Celtics are doing to the Heat what the Heat did to them earlier in the series: Miami has 11 turnovers already in the first half. That and the 10 free-throw disparity have helped the Celtics rally back to take a one-point lead.

Oh, and Tatum and Brown have combined for 31 points on 14 shots. That helps too.

5:35 – The Heat stretch the lead back out to seven. The Celtics simply haven’t been able to find consistent offense outside of Tatum, and they are 3-for-10 from 3-point range.

8:17 – What a second-quarter takeover by Tatum: A 3-pointer, a dunk and a tough turnaround jumper on three consecutive possessions. He has 16 points on 5-for-6 shooting with a pair of 3-pointers and four free throws in the first 13 minutes.

9:54 – The big difference so far: The Heat have made three more 3-pointers than the Celtics, but the Celtics are 10-for-10 at the free-throw line, while the Heat are yet to shoot one.

0:00 – The Heat win the first quarter 29-22. Several ominous signs: The 3-pointers fell (but not by their usual shooters), Jimmy Butler got going early, and the Celtics were sloppy.

1:15 – An addendum to the note below: Celtics need to figure out how to rebound when protecting the rim takes Robert Williams out of position.

3:20 – Robert Williams just affected two Heat shots at the rim and blocked two by Jimmy Butler. That’s four shots on one possession, for those keeping track. The Celtics still don’t look perfect, but their defense appears to be rounding into shape early enough to stem the Heat tide before it gets out of control.

9:00 – Bad start for the Celtics: They are sloppy, and the Heat keep getting out in transition. Even when the Celtics stop the initial attack, the Heat get good looks as the Celtics try to scramble and slow them down.

Udoka called an early timeout as the Celtics went down 12-5. Re-establishing a pace they want to play over the next few minutes will be important — while the Celtics started slow in Game 5, they didn’t fall behind by much because their defense stifled the Heat. That hasn’t happened so far.

– The Celtics, like the Heat, held a moment of silence for the school shooting victims in Uvalde, TX before the game.

– First, the big injury news: Both Robert Williams and Marcus Smart are available for the Celtics, while Tyler Herro will once again sit out for the Heat. Herro has been one of the few consistent half-court options for the Heat.

“These are not easy conversations or decisions,” Heat coach Erik Spoelstra said before the game. “He’s definitely made progress, but he’s not quite ready, you know, to step into this kind of intensity of a game.”

– Draymond Green believes the Celtics are going to clinch. Brian Scalabrine thinks the Heat have “a snowball’s chance in hell.” Is the rush to coronate the Celtics in the Eastern Conference too premature?

“We’ve talked about being the hunted — the hunter, earlier in the series against Milwaukee. Now we’re on the other side,” Ime Udoka said. “That’s big for us to go out and try to finish it tonight. We did the same thing in Milwaukee, went to their place, brought it back for Game 7. We’d like to avoid that. …

“Our mindset is to come out and be aggressive, like we did last game. We respond well to wins, not just when our back is against the wall.”

FiveThirtyEight gives the Celtics an 89 percent chance of reaching the Finals while most sportsbooks have Boston as an 8.5-point favorite to win Game 6.

Common Neurological Conditions and How to Prevent Them