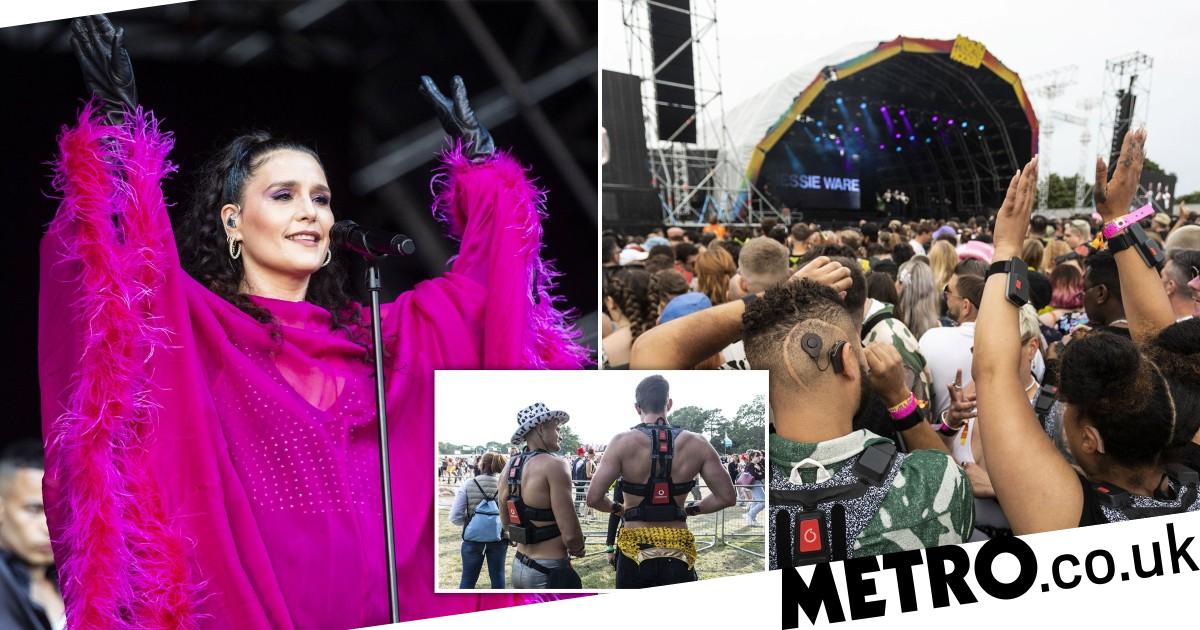 The musician hopes the tech will be made available in every venue after being ‘blown away’ following its initial trial stage.

Revellers at the Mighty Hoopla festival in London’s Brockwell Park, where singer-songwriter Jessie performed earlier this month, were the first to try out the 5G-enabled haptic harness.

The technology, from Vodafone, allows fans to feel the music through vibrations, delivered by 24 touch points around the harness to provide a multi-sensory experience.

Jessie, 37, who headlines The Park stage at Glastonbury next weekend, said the possibilities felt ‘endless’ and she was ‘excited for the future’ after witnessing the devices in action.

She said of the trial: ‘I was very, very honoured to be a part of that and for that to be happening.

‘For me, it’s really important that my shows can be as inclusive as possible.

She added that the tech creates a ‘fully immersive’ experience, which is ‘what festivals are about – togetherness.’

Music fans with limited hearing who attend festivals will often rely on lip reading and vibrations from the speakers to connect with performers, but the new technology entails them getting very close to the stage.

Vodafone partnered with Music Not Impossible to develop the harnesses, which combines the company’s haptic technology with Vodafone’s low-latency 5G network.

Jessie said the technology could be rolled out across the entire music industry in the ‘next step.’

‘I don’t know how that can work out but that will be the next step so that it can continue and they are included.’

Jessie – who ‘loved’ being part of the trial – later told the Standard that she can’t wait to perform at the ‘greatest festival in the world’ this summer.

‘Being out on the road again feels very fun. My [Table Manners] podcast has taken up a lot of time which I love, but I do sometimes have to remind myself that I’m a singer first and foremost,’ she continued.

‘For me to be able to be with audiences again and able to interact, I feel very indulged at the moment.’

She’ll join a stellar line-up, including the likes of Diana Ross, Fleetwood Mac, Kendrick Lamar, Sir Paul McCartney, and more, when Glasto kicks off on June 22.


MORE : Cher congratulates Kate Bush for breaking her record as oldest female to get number one with Running Up That Hill