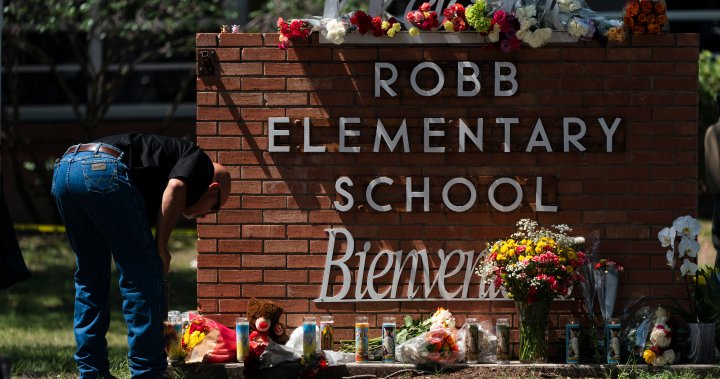 President Joe Biden has indicated that the U.S. federal government may help the town of Uvalde, Texas, raze Robb Elementary School and build a new facility there after it was the site of a tragic school shooting. Last Tuesday, an 18-year-old gunman entered the school and opened fire, killing 19 students and two teachers.

“He said, ‘I’m not going away, I’m going to bring you resources, we’re going to look to raze that school, and build a new one,’” Gutierrez said, recounting his conversation with the president during an interview with CNN affiliate KSAT 12. He also made a similar statement on MSNBC.

Ottawa is moving to freeze handgun sales nationwide. Here’s what that means

Gutierrez said he was dismayed to discover that there is a federal grant process in place to help schools rebuild after being the site of mass shooting incidents.

“There’s a federal grant process for it … and that’s the sad part,” Gutierrez told KSAT anchor Steve Spriester. “What kind of world are we living in, that legislation was created for razing these schools?”

Gutierrez said he’s been visiting families and working in Uvalde since Tuesday.

“I can’t tell you how many little children that I’ve talked to that don’t want to go back into that building. They’re just traumatized, they’re just destroyed,” he said during the emotional interview.

According to the Centre for Violence Prevention at the Children’s Hospital of Philadelphia, it’s not uncommon for schools to be shut down after mass shootings.

“In many cases, these schools are closed or entirely renovated in an attempt to decrease the traumatic reminders that they have become for community members.”

“This is a community that is going to need therapy. There’s one psychiatrist in Uvalde and very few mental health therapists. We’re going to change that.”

On Dec. 14, 2012, the mass shooting at Sandy Hook Elementary sent shockwaves throughout the U.S. Twenty children aged six to seven died, as well as six adults.

Three weeks after the massacre, Sandy Hook students resumed classes at the nearby Chalk Hill Middle School, which was decorated with rugs and furniture similar to what was in Sandy Hook (the school’s turtle was also brought) to make the transition easier for the young students.

In the meantime, Sandy Hook was razed and rebuilt.

Four years later, the new Sandy Hook opened its doors. Some children who were in kindergarten during the shooting were enrolled in Grade 4.

6:38
Things changed after Sandy Hook shooting, they got worse: Frum

Things changed after Sandy Hook shooting, they got worse: Frum

At Columbine High, where 12 students and one teacher were killed in April 1999, only part of the school was torn down. The library, where 10 of the deaths occurred, did not reopen with the rest of the school after summer break, four months after the shooting.

In 2001, the construction of the new HOPE (Healing for People Everywhere) library was completed — but there is still talk of demolishing the old Columbine High.

Westpac bypasses union after failing to agree on wage rises

Forgetfulness Is Common, But May Be a Door-Way To…

Struggling GPs under pressure could refuse to see patients…

The best restaurants for 2022 named by Tripadvisor –…