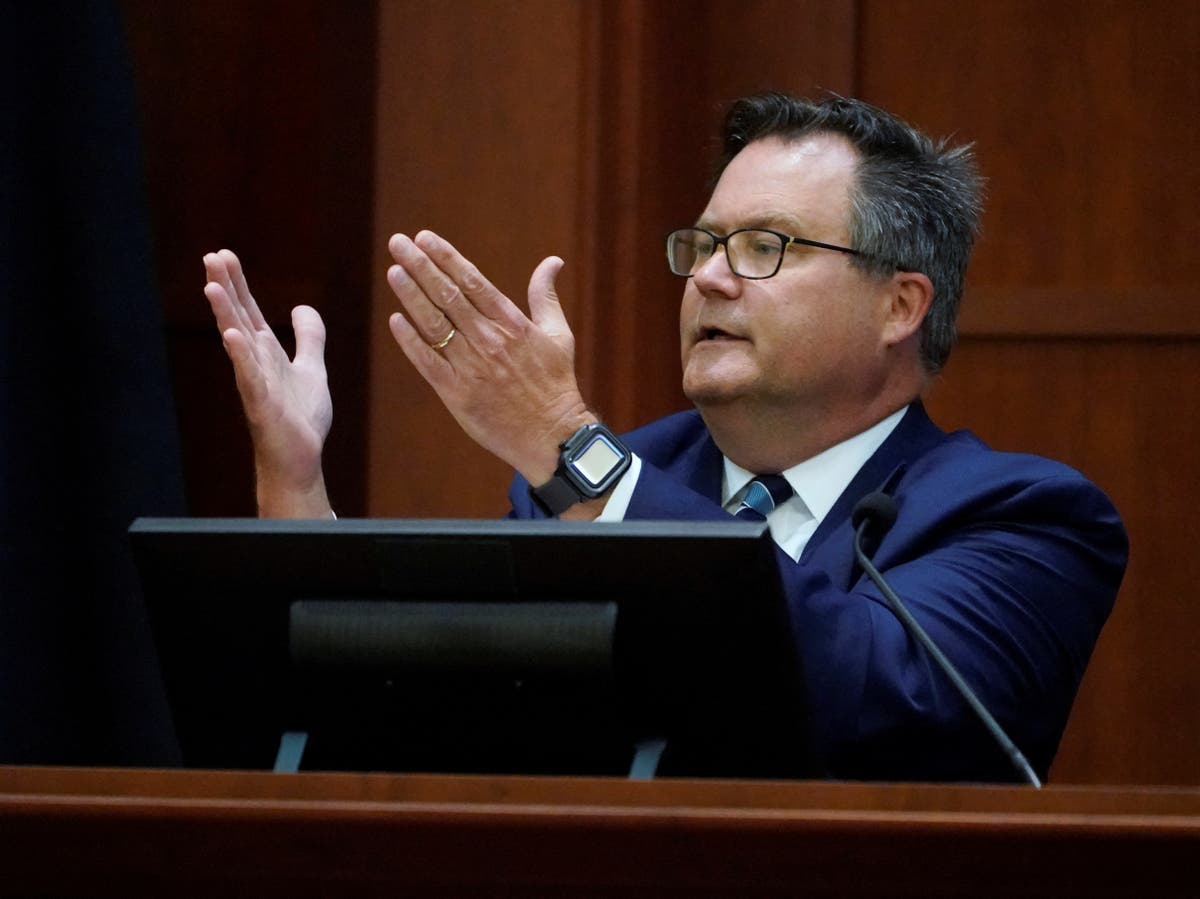 Johnny Depp’s account of a fight with Amber Heard during which his finger was severed has been disputed by an expert witness.

Dr Richard Moore, an orthopaedic surgeon from Wilmington, North Carolina told the court on Monday that Mr Depp’s account of the fight in which he says his finger was cut off when Ms Heard threw a vodka bottle at him is “not consistent with what we see in the described injury pattern or the clinical photographs”.

The disputed fight took place in Australia in March 2015.

The defamation trial between Mr Depp and Ms Heard has now entered its sixth and final week in Fairfax, Virginia. Mr Depp’s lawsuit against his ex-wife claims she defamed him in a December 2018 op-ed published in The Washington Post titled “I spoke up against sexual violence — and faced our culture’s wrath. That has to change”.

Dr Moore, a hand surgery specialist, was asked by Ms Heard’s legal team if the finger injury “occurred as a result of a vodka bottle being thrown at him?”

He said he couldn’t see any evidence of damage to the fingernail that he would expect from an injury when the finger was struck by a bottle from above.

While Mr Depp claims that his finger was severed by a vodka bottle thrown by Ms Heard, she has testified that he was injured when he smashed a phone against a wall.

Depp lawyer Camille Vasquez noted that Mr Depp testified that his finger was wrapped around the bar and that the bottle struck him at an angle, not directly from above.

Dr Moore said in his written testimony that “I cannot rule anything out completely … I can’t rule out that the injury was caused by a car door … I can’t definitively say what caused the injury”.

Mr Depp gave his own account about what’s become known as the “severed finger fight” during his turn as a witness last month.

He alleged that Ms Heard became “irate” during a discussion about a postnuptial agreement. “She could not let go of the fact that I was in on this postnup agreement and that I was trying to trick her into essentially getting nothing if something were to happen,” Mr Depp said.

He said he told Ms Heard those were not his intentions, but that the conversation escalated into “madness”, “chaos”, and “violence”.

“She was irate and she was possessed,” he said, adding that Ms Heard was “hammering” him with “brutal words”. “Pardon my language, but I remember that it wasn’t nice being called an a**-kisser to lawyers or a p***y that didn’t fight for her or stand up for her.”

Asked how his finger became injured, Mr Depp said things “were all getting too crazy”. “I went behind the bar, I grabbed a bottle of vodka that was there and a shot glass,” he said. Mr Depp said he “poured [himself] two or three stiff shots of vodka”, which were “the first taste of alcohol [he’d] had in a long time”.

He alleged that Ms Heard, having found him at the bar, started screaming at him about his drinking. “She walked up to me and reached and grabbed the bottle of vodka and then just kind of stood back and hurled it at me,” he said. “And it just went right past my head and smashed behind me.”

Mr Depp said he grabbed another bottle, poured himself a shot, and drank it. He alleged that Ms Heard was flinging insults at him and grabbed that bottle and threw it at him. He alleged that the bottle “made contact” with him and “shattered everywhere”.

“I didn’t feel the pain at first at all,” he said. “I felt no pain whatsoever. I felt heat and I felt as if something were dripping down my hand. And then I looked down and realized that the tip of my finger had been severed, and I was looking directly at my bones sticking out.”

“I think that I went into some sort of – I don’t know what a nervous breakdown feels like, but that’s probably the closest that I’ve ever been,” he said.

“Nothing made sense. I knew in my mind and in my heart, this is not life, this is not life. No one should have to go through this. And as I said, this feeling of being in the middle of some sort of nervous breakdown, I started to write in my own blood on the walls little reminders from our past that essentially represented lies that she had told me, and lies that I had caught her in.”

Mr Depp said that he called his doctor and told him, “You might want to come over, I’ve cut my finger off here.”

Mr Depp said that once in the emergency room, he told a doctor he had smashed his finger in a door because he did not want to “get [Ms Heard] in trouble”. “I didn’t want to put her name in that mix,” he said.

Mr Depp said that after the alleged incident, “for all intents and purposes, [he] was just done.”

Ms Heard was asked about the incident, which allegedly took place in March 2015 (about a month after she and Mr Depp got married), on her second day of testimony (5 May).

Ms Heard said Mr Depp was “very upset” about her working with Eddie Redmayne on The Danish Girl and other actors. She recounted a “belligerent” interaction with Mr Depp that made her realize “the arrows were pointed at [her] again”.

A physical altercation began, during which Ms Heard said Mr Depp “slams me against the wall hard” and called her names.

At one point, Ms Heard said Mr Depp threw her into a ping-pong table, got on top of her, and whacked her in the face repetitively.

Ms Heard was visibly distressed as she continued her testimony. She said Mr Depp struck her in a manner that “sent [her] down to the ground”, and that when she got up Mr Depp threw a bottle in her direction. She said at one point he had a broken bottle up next to her face and neck, and told her he would “carve up [her] face”.

Ms Heard said her memories of the night came to her as “flashes”. Eventually, she said, Mr Depp was throwing bottles in her direction and she could “feel glass breaking behind [her]” and one bottle going past her head, which left her “terrified”.

She said Mr Depp ripped her nightgown off her chest and that the nightgown was eventually ripped off completely, leaving her naked.

She alleged that Mr Depp started punching the wall next to her head and holding her by the neck. At some point, she said Mr Depp ended up “on top of [her]”, telling her she’d “ruined [his] f****** life”.

Ms Heard said she took sleeping pills and woke up to find Mr Depp “missing a finger”. “He kind of held it up,” she said. “And I said, ‘What did you do? When?’ And I realized in my head that there had been many hours since this probably happened.”

Ms Heard suggested the cut might have occurred when she said Mr Depp smashed up a phone earlier.

Additional reporting by The Associated Press