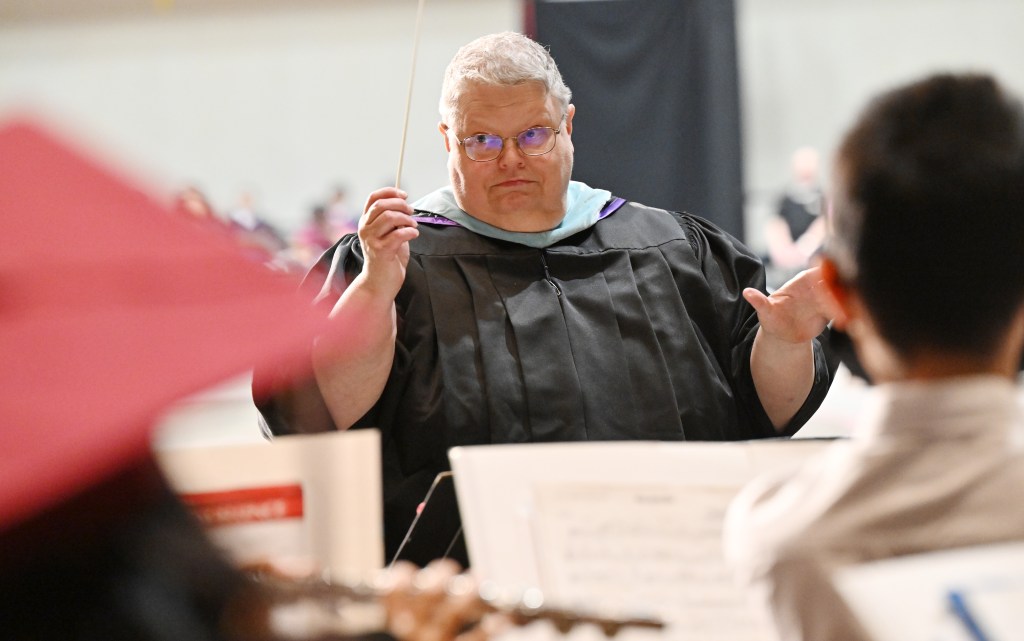 Jason Kroll made history in 1990 when he became the first boy to try out for the Johnson High School dance team.

But Kroll said he would never have become the school’s first male J-Ette without the help of Anne Marie Person, the school’s longtime band director and then-J-Ette advisor.

Person, who retires Monday, was Kroll’s strongest advocate when he had a “wild hair” to join the team, which was then all girls, he said.

“There was some controversy because it had never been done before,” said Kroll, 49, of St. Paul. “Her philosophy was, ‘If he can kick as high as the girls, then we’re going to let him be a J-Ette,’ so I got to audition, and I was a J-Ette.”

It wasn’t easy. Kroll was ridiculed and “pelted with Skittles and insults” while dancing with the team, he said.

On one especially trying afternoon, he said, he ended up in Person’s office. “She shut the door and let me cry and scream and use every single obscenity without judgment or recourse,” he said. “Who knows how much that saved me that day? There aren’t enough ways to say ‘Thank you.’ I simply know I am a better person for having crossed paths with this angel carrying a baton.”

Person, who started teaching at Johnson in 1986, served as the school’s orchestra and band director, taught guitar and songwriting, and coordinated graduation.

‘FOCUS ON THE KIDS’

At graduation on Wednesday night at Roy Wilkins Auditorium in St. Paul, Person donned a black gown and conducted the school’s orchestra for the last time. “I brought extra Kleenex, just to be safe,” she said. “Some of the kids needed it. I was trying to focus on the kids instead of me.”

Focusing on the kids is what Person had done for the past 36 years, said Assistant Principal Kevin Davis. “This wasn’t just a job to her; this was her passion,” he said. “Her whole thing was about the music and the kids. She was here because she loved music, and she wanted her students to love it, too.”

“Band kids” are known for being good kids, she said. “I like to think that we help them find their goodness. Working in a group, toward a common goal, helps them have a structure for positive activity and positive achievement. … An ensemble helps kids find their strengths, share them with others and encourage each other to develop those things. I think that’s the part we want to bring out for everybody.”

Former student Amelia Wilkerson Jaspersen, 32, of Woodbury, said Person encouraged her and her bandmates to play multiple instruments “in order to have a wide variety of experience.”

Person, she said, understood her students in a way that was different from other teachers.

“She would treat you as an equal, but she would also hold you to a really high standard,” said Jaspersen, who played flute and piccolo. “She didn’t let you slip up. She pushed us for Ordway Honors Concerts, for solo ensemble contests. She made sure everybody had a fair opportunity for solos. She had a way of making sure that everyone who wanted the opportunity – whether they wanted it or not, or whether they realized their potential or not – that it was realized and met, even if it took all four years.”

Person also had a gift for explaining complex musical terms in simple terms. “She would say, ‘This piece needs to be elegant, not elephant,’” Jaspersen said. “She would always have some funny quip or funny way of phrasing things.”

Every spring, Person put on a poultry-themed concert that would feature classics like “Turkey in the Straw” and “The Chicken Dance,” Jaspersen said. She also was known for her “Turkey Lecture,” given every year before Thanksgiving break.

“OK, kids, I need you all healthy for your concert, and you don’t want to waste your days off being sick, so be careful about food,” Person would say in a lecture that was transcribed and shared on Facebook. “If refrigerated or heated stuff is out over two hours, bad things can happen! Turkey and stuffing and gravy and such should be hot or in the fridge chillin’, so you won’t be illin’. Groan all you want; it’s better to groan at bad rhymes than sick tummies.”

Person, who grew up in Richfield, decided she wanted to be a band and orchestra teacher while a student at Richfield High School. Her band director, Noel Gagnon, would sometimes have her work with different sections of the band. “I would take a section out to a different room and work with them, and it was so incredible to see the improvement and to participate in that with them that I kind of got hooked on it,” she said.

Person, who plays the violin, went to Northwestern University in Evanston, Ill., majoring in music education. She has spent almost her entire professional career working at Johnson.

The school is special, in part, she said, because of the strong pride its alumni have in it. “The back of the band shirts say, ‘Tradition and Pride,’ and that’s really it,” she said. “We have so many great alumni. Students know that they, too, can do wonderful things, and they don’t have to be born rich to do it. It’s being part of it — contributing and also enjoying the contributions of others. It all boils down to sharing.”

‘A CONCERT AT THE END’

During nearly four decades of teaching, she has seen a lot of changes in teaching music. Technological advances have been especially helpful, she said.

“If I ask a kid to learn a song, I usually now have a recording they can hear of that specific arrangement of that song, and I can send it to them on our Schoology program, so that the kids can listen to it right on their iPad with their little earphones if they want,” she said. “It used to be, back in the day, you had to try and find a record of it somewhere, and it wasn’t something that you could send to them. … That’s a really big help when you’re teaching music.”

Person has been the school’s senior class advisor since 1992 and has been in charge of coordinating graduation and honors night. “I think the best present I can give my graduating seniors is a good graduation and a good honors night,” she said. “I do it because I like the kids. I … enjoy pulling off an event. It’s kind of like a concert, … in that you plan, and then it happens, and there is a certain satisfaction in that.”

Person has spent the past few weeks cleaning out her office. The flying-pig mobile is gone, as is her Northwestern University pennant. So is the photo featuring champagne-music maker Lawrence Welk and the words “Keep a song in your heart.”

Her retirement plans include playing violin with the Mississippi Valley Orchestra and Kenwood Symphony Orchestra, drawing and painting, and attending Minnesota Orchestra concerts. Her favorite composers are Pyotr Ilyich Tchaikovsky, Nikolai Rimsky-Korsakov and Antonio Vivaldi, but when she’s driving, she said, the radio is tuned to Sirius XM’s 80s on 8.

Many of Person’s contemporaries retired during COVID, but she said she is glad she came back to teach this year.

“COVID was frustrating enough without having it also take away your closure,” she said. “I needed a concert at the end of it.”

It’s a problem they have – Crystal Palace’s Chris Richards…