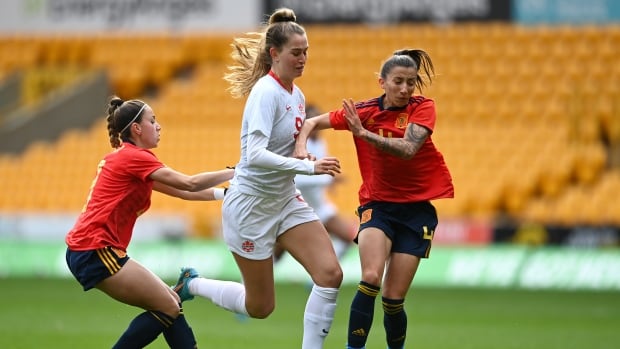 Jordyn Huitema will now be playing closer to home.

OL Reign, based in Seattle, is owned by France’s Olympique Lyonnais and is the closest women’s professional soccer team to Huitema’s hometown of Chilliwack, B.C.

The 21-year-old made 73 appearances with PSG over her three seasons, scoring nine goals and helping her club win the Coupe de France and Division 1 Féminine.

“I’m really looking forward to this new chapter and opportunity with OL Reign. This team is filled with some of the most talented players from around the world and I’m honoured to be a part of it,” Huitema said in a press release. “I’m eager to get started and can’t wait to contribute to the team’s success.”

Joining the OL Reign marks the first time that Huitema will play in the NWSL, having signed with PSG after graduating from the youth development ranks in B.C., where she played on the TSS Rovers with current Juventus midfielder Julia Grosso.

Canadians a strong presence in the NWSL

Huitema, who has 49 appearances with the Canadian National Team, will play alongside Quinn, a fellow Tokyo 2020 Olympic Champion with the Seattle-based club, making it 15 Canadians now playing in the NWSL on nine of the league’s 12 teams.

With Huitema and Quinn on OL Reign, the Cascadia rivalry in the NWSL becomes a must-watch for Canadian soccer fans. The Portland Thorns feature all-time international leading goalscorer Christine Sinclair and new signing Janine Beckie on the field, while former Canadians internationals Rhian Wilkinson and Karina Leblanc are in the club’s managment.

Huitema, Quinn, Sinclair and Beckie will join the national team camp in Toronto for an international friendly against South Korea on June 26 at BMO Field, in preparation for July’s Concacaf W Championship. That tourney serves as qualifying for the FIFA Women’s World Cup 2023 Australia-New Zealand, and the Paris 2024 Olympic Games.

Playing with the Reign will likely ensure Huitema will get more playing time after not getting much with PSG, despite the club’s consistent success among Europe’s best competitions. With more playing time, Huitema will be given a chance to develop as an attacking player, a presence needed in the Canadian team as Sinclair’s career reaches its twilight.

Huitema’s transfer, for an undisclosed fee between PSG and OL Reign, is the latest big move for Canadians this summer, following Kadeisha Buchanan signing with Chelsea FC after several years and five UWCL titles with Olympique Lyonnais in France and Beckie’s move from Manchester City to Portland.

Ambulance staff ‘unable to drive’ new vehicles because of their height