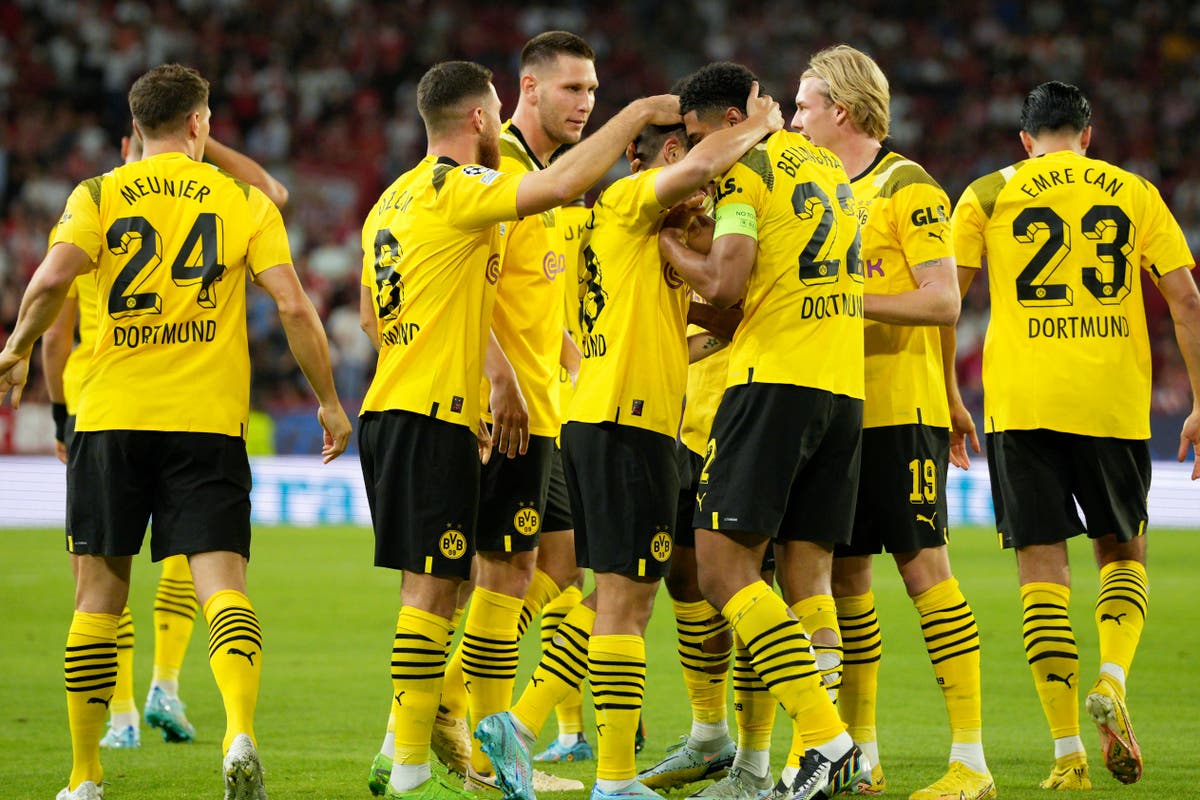 Jude Bellingham scored one and set up the opener for Raphael Guerreiro as he led Borussia Dortmund to a convincing 4-1 win at Sevilla in UEFA Champions League Group G.

Captaining his side at the age of just 19, Bellingham jinked into the left side of the box to double his side’s lead in the 41st minute before before Karim Ademeyi added a third.

Youssef En-Nesyri scored a consolation for Sevilla early in the second half before Julian Brandt completed the scoring for the Bellingham-inspired hosts.

Manchester City extended their 100 per cent record to three straight games as they brushed aside Copenhagen 5-0 at the Etihad Stadium with Erling Haaland scoring twice.

The Norwegian notched his brace just after the half-hour mark before an own goal from David Khocholava effectively put the hosts out of sight before half-time.

Haaland was withdrawn at the break but there was no respite for the visitors as Riyad Mahrez made it four from the penalty spot before Julian Alvarez completed the scoring for City on his first Champions League start.

Chelsea got their Group E campaign up and running in style with a thumping 3-0 win over AC Milan at Stamford Bridge.

Three points were imperative for the hosts after failing to win their first two games in the group and they got off to an encouraging start when Wesley Fofana nudged home his first goal for the club after 24 minutes.

Pierre-Emerick Aubameyang doubled Chelsea’s lead in the 56th minute before Reece James rounded off a stunning evening for Graham Potter’s men when he picked up Raheem Sterling’s through-ball and rammed the third past Milan keeper Ciprian Tatarusanu.

A second-half penalty from Noah Okafor proved enough for Salzburg to beat Dinamo Zagreb 1-0 and take over at the top of the group with five points from their first three games.

Defending champions Real Madrid were forced to ride their luck to extend their 100 per cent start at the top of Group F with a 2-1 win over Shakhtar Donetsk at the Santiago Bernebeu.

The hosts looked set to coast to victory after Rodrygo fired a long-range opener then Vinicius Junior doubled their advantage with less than half an hour on the clock.

But Shakhtar replied through a thunderous volley from Oleksandr Zubkov before the break and the visitors continued to threaten to snatch an equaliser on the counter-attack.

Also in Group F, two goals from Andre Silva helped RB Leipzig coast to a 3-1 win over Celtic, who remain winless after their first three games.

Christopher Nkunku’s opener for Leipzig was cancelled out by Jota early in the second half, but a mistake by Joe Hart gifted Silva his first on 64 minutes and the Portuguese star sealed his side’s victory with his second 13 minutes later.

A brilliant strike from Lionel Messi was not enough for Paris St Germain to preserve their perfect start in Group H as they were held to a 1-1 draw at Benfica.

Messi curled a 22nd-minute opener past home keeper Odysseas Vlachodimos but his effort was cancelled out by a 41st-minute own goal by Danilo Pereira which keeps the hosts level at the top of the group.

Two goals from Adrien Rabiot got Juventus up and running at the third time of asking as they swept to a 3-1 win over Maccabi Haifa in Turin.

Starting pointless after their first two games, Rabiot grabbed a 35th-minute opener before Dusan Vlahovic doubled Juve’s lead early in the second half.

Dean David set up a nervy finish for the hosts when he reduced the deficit in the 75th minute but Rabiot’s second seven minutes from time wrapped up an overdue victory.