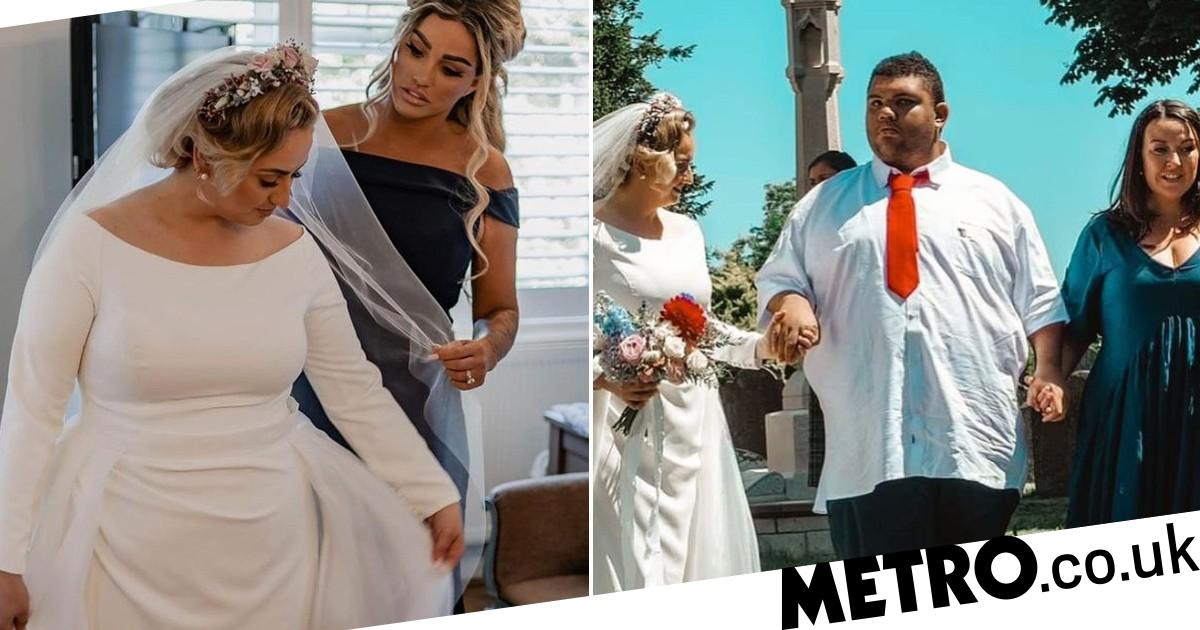 Katie Price has shared the first pictures of herself with sister Sophie from her wedding day on Wednesday.

Taking to Instagram, the former glamour model shared a candid shot of herself with bride Sophie, helping her sister fix her veil ahead of the ceremony.

She also posted a picture of her eldest son Harvey in his outfit, which included a red tie matched to the flowers in Sophie’s bouquet.

He reportedly cheerfully waved to onlookers before heading inside.

Katie, who served as a bridesmaid alongside daughters Princess, 14, and Bunny, seven, as Sophie tied the knot with partner Harry Brooks, commented: ‘@sophie_pricey such a great day!💖’

‘Harvey looked so smart💖,’ she added.

The My Crazy Life star, 44, looked sophisticated in a blue off-the-shoulder bridesmaid dress for the occasion, and her blonde hair styled in loose curls.

Princess matched her mum, as well as little sister Bunny, in navy too.

Katie’s sons Junior, 17, and Jett, eight, also looked dapper in suits with Katie managing to gather her children for a family photo, while newlyweds Sophie and Harry were spotted having a cute moment with their one-year-old son Albert.

At the lively reception singer Junior, following in his dad Peter Andre’s footsteps, shared a dance with Bunny, swaying along to his debut single Slide together.

Katie and Sophie’s mum Amy Price was also seen in photos, having a lovely time, while the bride was given away by her father.

However, missing from the special day was Katie’s fiancé Carl Woods, who was reportedly banned from the event by Sophie.

Sophie and Harry announced their engagement in March, after welcoming their son together in September.


MORE : Katie Price declares ‘suck my d**k’ as she arrives at court for sentencing after pleading guilty to breaching restraining order

Desperate Putin ‘calls up obese 20st retired general, 67,’ to lead troops in Ukraine after ‘running out of commanders’