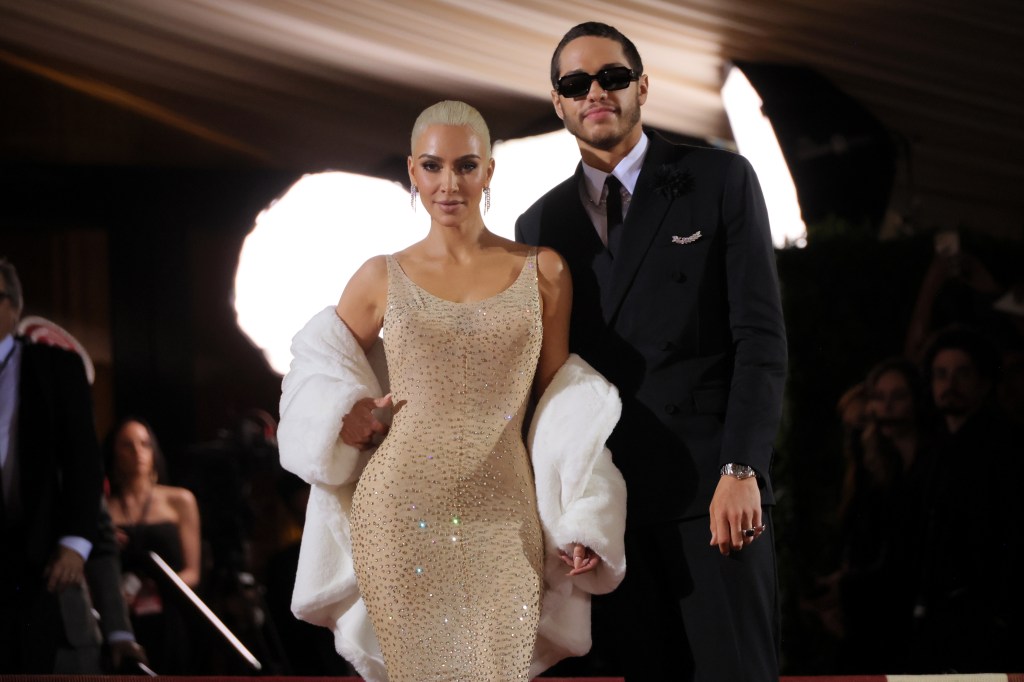 Kim Kardashian has become a billionaire, in part by appropriating the language of body positivity for women with her Skims Shapewear, but many have questioned her commitment to body acceptance, especially after her appearance Monday night at the Met Gala.

The reality TV star boasted about how she used a crash diet to lose 16 pounds in three weeks so that she could wear the iconic dress that a troubled Marilyn Monroe wore to sing “Happy Birthday” to President John F. Kennedy in the last three months months of her life.

Kardashian’s celebration of her rapid weight loss for the sake of a 5-minute red carpet moment comes across as tone-deaf to many, given that it’s 2022, and there’s plenty of research and common-sense wisdom that says that crash dieting is unhealthy and can potentially lead to harmful ideas about food and body image, even to eating disorders.

“Can we stop acting like Kim Kardashian losing 16 pounds in 3 weeks to fit into her dress is cool?” sports broadcaster Kendra Middleton tweeted, one of many critical comments posted overnight. “It’s scary and not healthy.”

Such concerns didn’t seem to be on the radar of Kardashian and journalists who delivered gushing narratives about how determined the reality TV star was to revive Monroe’s “look” from Kennedy’s 45th birthday party in May 1962.

Monroe caused a national stir on May 19, 1962 at Madison Square Garden. The 36-year-old sex symbol was sewn into a sheer, flesh-colored Jean Louis dress, covered in rhinestones, to lead the crowd in a breathy rendition of “Happy Birthday.” In an interview with Vogue, Kardashian marveled at how Monroe looked “naked” under the rhinestones, which the president and his entourage, including brother Robert F. Kennedy and Rat Packer brother-in-law Peter Lawford, no doubt appreciated.

“I can now retire from politics,” Kennedy said, ”after having had, ah, ‘Happy Birthday’ sung to me in such a sweet, wholesome way.”

That Kardashian and others paint this moment in celebratory terms is a bit odd, considering that it’s well-known that Monroe wasn’t in a very healthy place at the time. She was recently divorced from third husband, playwright Arthur Miller, reportedly engaged in doomed affairs with both Kennedy brothers, and was about to be fired from her latest movie for health problems and chronic tardiness. She was dealing with substance abuse, depression, possibly bipolar disorder and physical ailments including endometriosis and gall bladder disease, PBS reported.

The night of the performance, Monroe tried to ease her anxiety with pills, champagne and the children’s book, “The Little Engine That Could,” Gloria Steinem later wrote. Monroe died on Aug. 4, 1962, of a reported drug overdose.

Not surprisingly, Kardashian’s focus on that May 1962 moment was just on Monroe’s “look,” not on how inherently disturbing the situation was. Kardashian told Vogue magazine about how she used her connections to gain access to Monroe’s “naked” dress from its current owner, Ripley’s Believe It Or Not Museum.

Thank you Ripley’s Believe It or Not! for giving me the opportunity to debut this evocative piece of fashion history for the first time since the late Marilyn Monroe wore it. I am forever grateful for this moment. ✨🕊 pic.twitter.com/XiXNclCEgB

Kardashian told Vogue she was initially devastated to learn that her famously maintained curves couldn’t fit into the dress. Because the dress couldn’t be altered, Kardashian would have to find something else to wear to the Met Gala if she couldn’t slim down to fit Monroe’s size. The Los Angeles County coroner’s report shows that Monroe was 117 pounds when she died.

Vogue let Kardashian almost paint herself in heroic terms, describing her determination to adhere to a strict diet to reach her weight-loss goal.

“I would wear a sauna suit twice a day, run on the treadmill, completely cut out all sugar and all carbs, and just eat the cleanest veggies and protein,” Kardashian told Vogue. She claims she didn’t “starve” herself, but she said, “I was so strict.”

It turns out that Kardashian only wore the dress for five minutes at the Met Gala, Vogue reported. She only wore it long enough to pose for photos on the stairs — which she visibly had trouble ascending, needing the help of her date, Pete Davidson. Given the delicate nature of the historic gown, Kardashian changed into a replica for the rest of the evening.

I love @KimKardashian’s Marilyn look so very much.

But you’d think she’d have made sure she could walk up stairs at an event that requires her to… walk up a whole bunch of stairs. With cameras are going off at every second. #MetGala pic.twitter.com/28QRBWG15k

As for Kardashian’s efforts to fit into he dress, she may have eaten the “cleanest veggies and protein,” but there was nothing healthy about her weight-loss strategy, according to nutritionists who spoke to U.K.-based Hello magazine.

“Yes,” the diet “worked,” said registered nutritionist Hannah Alderson. “Is it healthy? Not really, as extreme behavior with food can be a super negative force,” Alderson said.

Another nutritionist, Charlotte Faure Green, told Hello that Kardashian’s diet was more than “extreme” in that it led her to lose more than four pounds per week. “This kind of weight loss is unsustainable and will invariably end up with a binge cycle, following the period of restriction,” Green said.

Non-experts on Twitter also said that Kardashian’s approach was “irresponsible” and unhealthy, if not to her then to the girls and young women who look to Kardashian and her sisters, all said to be obsessed with cosmetic surgery and  Photoshop, to set today’s impossible standards of beauty.

Another sports journalist, Gabrielle Starr, was among many who decried the “disrespect” shown to Monroe’s memory by Kardashian being able to wear her dress. Starr also tweeted that Kardashian has promoted “unrealistic body standards for years,” including diets and Skims waist trainers. “Her talking about losing 16 pounds in 3 weeks to fit into Marilyn’s dress (which no one should get to wear) is appalling.”

So excited about this!!!! @skims waist trainer. pic.twitter.com/sq1zKOjCUX

Another woman expressed dismay that Kardashian could command national attention for her crash diet. “The Kim Kardashian weight loss thing is (expletive) up and NOT okay to talk about on national television where the youth will find it and bring it to therapy to defend their eating disorders,” the woman tweeted.

Kardashian also confirmed that she indulged in binge-cycle tendencies after the Met Gala. She took to Instagram to post photos of the pizza and donuts that she and  Davdison indulged in after returning to their hotel.

Kim Kardashian hit the snooze on Met Gala after-parties … choosing to head back to the hotel with Pete Davidson for the carbs they craved after 3 weeks of dieting! 🍕 https://t.co/kewF5oBIWi

“Kim said she’s been avoiding carbs and as soon as the night is over she’s ordering pizza,” another Twitter user wrote. “Eek, restricting yourself for dramatic weight loss to basically binge afterwards isn’t healthy or worth it. We are all enough as we are.”

Others brought up the fact that people hold her up as a role model, probably including her own four children.

“North West and my daughter are just days apart in age and I’m struggling to comprehend how Kim K can be at all comfortable sharing her rapid weight loss over the last 3 weeks,” tweeted a writer and single parent. “It’s irresponsible.”

Award-Winning Movies of the Actor Who Once Rejected Oscars…

The moment SES heroes save a young woman from Sydney…