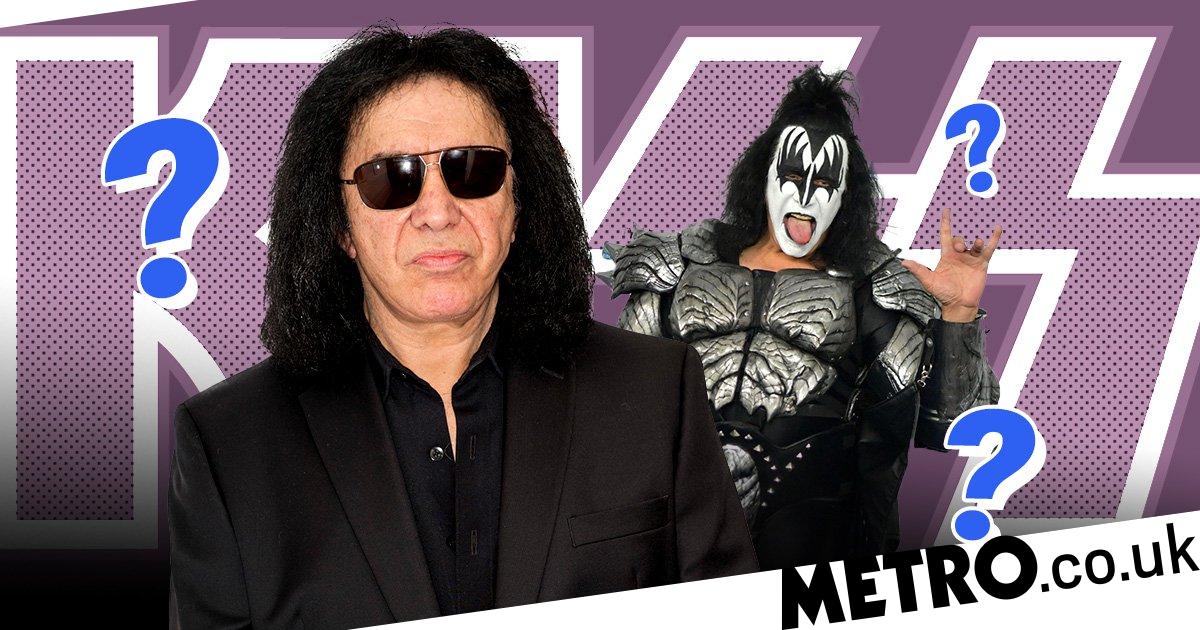 Welcome to Metro.co.uk‘s The Big Questions, where we ask the biggest of big questions (and the smaller ones too) and this week we’ve had a sit-down with one of rock music’s most enduring legends, Gene Simmons…

It’s the end of a rock ‘n’ roll institution. With a career spanning 50 years, American icons KISS are calling it quits with their End of the Road World Tour. The band is bringing their fire and flames to Donington Park’s hallowed grounds for a UK swansong at Download 2022.

One of rock’s more colourful personalities, Gene Simmons – or The Demon, if you know him by his fire-breathing, face paint-wearing stage persona – 72, has fronted KISS alongside Paul Stanley since the beginning. Born in Israel, Simmons emigrated to the United States with his mother, settling in New York at the age of eight. He discovered The Beatles, and the rest is history.

Ahead of the band’s final concert in the UK, we grabbed Gene to chat about his weekend habits, retirement, the KISS spectacle, money, the state of the music industry and more.

What are your fondest memories of performing in England?

There’s a resilience to the fans. At Download and the other big stadiums, the English fans are simply unaware that it’s raining, and that the ground is muddy. We’ve played at Download and Monsters of Rock when it was raining cats and dogs, and nobody moved. Hardly an umbrella in sight. Whereas in California, if it rains it’s a catastrophe.

What would it take to tempt you out of your coming retirement and head back on the road with KISS? It seems to happen a lot in rock ‘n’ roll. Most recently Mötley Crüe…

I don’t believe that’s gonna happen. To put it bluntly, we’re the hardest working band on that stage. Maybe we’re not the best and maybe we’re not the worst, but we certainly give bang for the buck. We’re all big fans of Bono, Jagger, Freddie Mercury and all the other great frontmen. And they tend to be men in a certain genre. But as much as I admire and respect them, if you put on my outfit, you’re gonna pass out in half an hour. It takes two hours to put make-up on. You’ve gotta put on seven-inch, heeled boots, each of which weighs as much as a bowling ball. Between the armour, the studs and the guitar, you’re wearing about 40lbs. Oh, and you’ve gotta spit fire and fly through the air.

Hindsight is 20/20, but I would’ve been smarter to be in a band like The Ramones. Jeans, comfortable sneakers, a T-shirt, and you’re ready! When I walk offstage with the band, oh my god. You’re physically battered and exhausted. So out of pride and respect to the fans, you wanna get out while the going’s good. I’m 72 and in great shape. I never lose my voice. Feel really strong. But can I guarantee this is gonna be the case at 75? No, I can’t.

Is the live spectacle what you see as KISS’ legacy?

Yes. We love the pub bands, the punk bands and the grunge bands, but I think what you can say about KISS is that love ‘em or hate ‘em, we raised the expectations of what a fan gets for their money. Period. Exclamation point.

With what’s happened in the past two years, were you ever worried that you might not get a chance to say goodbye and go out on your own terms?

I didn’t really have that thought because we did the smart thing and got vaccinated twice, and then got booster shots. We continue to wear masks and practise social distancing. I know that not everybody believes in that, and as you know the Covid cases are going up. We keep saying ‘look, it’s your responsibility’. There are still people who believe the Earth is flat, but I don’t wanna be the one who says ‘no it’s not, bitch. It’s round.’

Does it look like Ace Frehley and Peter Criss [ex-founding members] will return to feature on this tour?

I’ve asked both of them repeatedly. In print, on the phone, everywhere. The answer seems to be no. Paul and I met with Ace and said ‘hey, it would be great for the fans if you came on for the encores’. Ace said ‘sure, I’ll come back. Get rid of Tommy [Thayer, current guitarist]’. Well, that’s not gonna happen. How many chances do you get in life? Ace was in and out of the band three different times. Peter, too.

I love both of them. They were equally important to the formation of the band, but not everybody’s designed to run a marathon. If you’re running a marathon and you start at full speed, you’ve made a stupid decision. If you start using drugs and alcohol a lot, it’s not gonna work. You’re not gonna last. That’s not allowed in KISS. If you’re a drunk or a drug addict, you’re gone. You live and die by the people you surround yourself with.

The last KISS studio album [Monster] came in 2012. Do you still collaborate on new music?

No, the collaboration stuff was happening less and less. Paul and I continue to jam when we soundcheck, ‘hey, that’s a good riff’. But do we follow up on it? No. It’s sad what’s happened to music. The fans have killed the chance any new band out there has to succeed, because downloading and filesharing means the music is worthless. How can a new band support themselves if they can’t make money with their music?

It’s like planting new seeds everywhere, but they don’t get watered. New bands need love, attention and a way to quit their day jobs, so that they can devote all their time to their art. They’re never gonna get the chance that I got, and that’s the saddest part.

What do you make of vinyl’s resurgence in recent years? Doesn’t that demonstrate that there’s still an appetite for physical music?

I say this with respect, but if you think that has any economic upside, you’re on crack. Ten thousand, twenty thousand, fifty thousand units of vinyl means nothing. That’s not gonna change the economic needle. You’re talking about musos. I know it’s out there, but I don’t know a single person that buys vinyl. Compared to downloads, the numbers are minuscule.

Think about Radiohead, one of my favourite bands. For some reason, Thom Yorke thinks I’ve got a stick up my ass about them, but he’s completely wrong. I fully admire and respect the art and depth of the band. They put out [In Rainbows, 2007] and said ‘pay what you like’. Most of the time people don’t wanna pay anything. Open the doors to a supermarket and say ‘come in, pay what you like’. What do you think’s gonna happen? They’re not gonna stay in business long.

People accuse me of only ever thinking about money. That’s right, bitch! Money is what makes the world go round. Yes, I know there’s passion and love. But if you’ve got a mother in Ethiopia with a baby cradled in her arms. All you need is love? It’s not true, that’s a romanticised view. Your child will be loved like no other, but it will die in your arms. It needs food, water and shelter, and the first thing you need is money.

We’ve trained an entire new generation to not pay for music. We’re killing the next Beatles, and they’re out there. And who’s the guilty party? The fans. You’re killing the thing that you love.

What can fans expect from your headline show at Download?

KISS is here to make you forget about the traffic jam, that your girlfriend is angry, and all the other things that cause you pain and anguish. For the few hours that we’re together, you’re gonna forget about your problems and see the greatest show on Earth. Even if you hate the band, you’re gonna walk out saying ‘boy, that was amazing!’

On a Saturday, where will we find you?

Well, it depends if we’re in a tour cycle. If we are, we could be gone for a year to a year and a half. We’ll do four to five shows a week and on days off you really wanna stop. I do nothing! Just stop talking, save your voice, because I really do sing. There are no electronics involved. But when we have four or five days off, I’ll go out and do the scenery. I’ve never been to Stonehenge, and that’s on my bucket list. I’ve always been fascinated by the history of it, so I should make a pilgrimage at some point. What were those early Brits thinking?

Do you sleep in or are you up and at ’em?

I respond to my body. If in the middle of the day I feel tired, I’ll sleep. Last night I woke up at 4am, so I got up. I don’t have that jetlag thing, which is why I’m built for touring around the world.

What are you watching/reading/listening to on a weekend?

I’ve been through different phases. I’d read books voraciously, but that’s gone down. I’m more fascinated by people. Especially people who are planet movers, who change life as we know it. The Warren Buffets, Elon Musks and Bill Gates of the world. They march to the beat of their own drum, and I’m curious about what makes them tick. I’ve been rereading some of Ayn Rand’s [writer and philosopher] books. She was another singular person who talked about individuals taking responsibility and not looking for government to be a babysitter.

In the free world, there’s still a socialist streak. Once we’re pulled from our mother’s teat, some of us want the government to reattach us to that teat. Guaranteed healthcare, guaranteed housing, guaranteed everything. I’ve always been against big government and having somebody who changes your diapers for you.


MORE : Sex Pistols’ Steve Jones says the monarchy ‘meant nothing to him and still doesn’t’ as Queen marks Platinum Jubilee