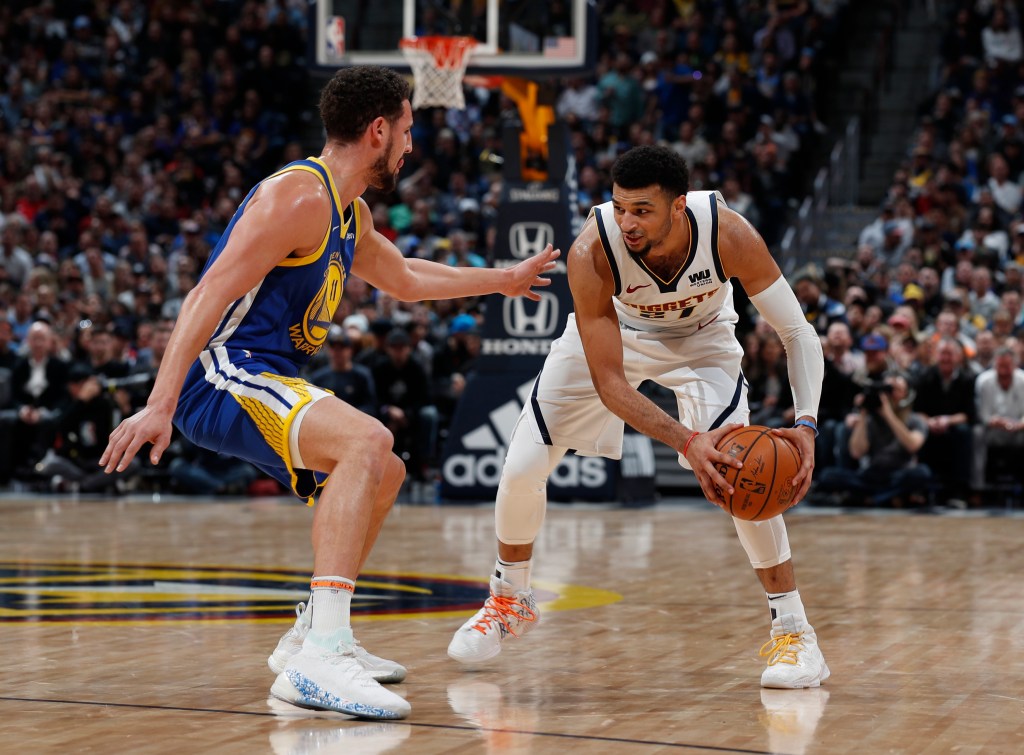 One of the first people Jamal Murray saw after tearing his ACL last April was Klay Thompson.

Murray, the Nuggets’ star point guard, was in the X-ray room at Chase Center getting his knee examined just minutes after collapsing in a heap near the end of Denver’s loss to the Warriors. Thompson came by in Murray’s moment of agony to check in on a young competitor who he saw was going through a familiar painful experience.

“[He] was just giving me advice on where he’s coming from and how long it’s been since he played and what to look forward to and how he managed it,” Murray told Complex in a Q&A published last month.

“It was the first day that it happened so I was listening to him, but it didn’t register because I was upset. Now that I look back at it, man, what he said and where he was before he came back, kind of gave me perspective. I’ll get there. I just have to be patient and put the work in now so it’ll show later.”

Denver has maintained that any return this season for Murray or teammate Michael Porter Jr. (back) would be up to the players themselves, in addition to the team’s medical staff. Both have been going through their pregame shooting routines in recent weeks, but national writer Shams Charania reported last week that it was unlikely that either would return in the playoffs.

The Nuggets bear some similarities to the Warriors of the past few seasons: Without Murray and Porter, their status as a contender is on pause, much like the Warriors’ title hopes without Thompson and Steph Curry in 2019-20, and with just Curry in 2020-21. Denver has seen more on-court success than either of those Golden State teams because it still has reigning MVP Nikola Jokic, whose passing game can lift teammates to greater heights.

But without Murray, the Nuggets’ crunch-time offense is missing half of its deadly pick-and-roll combo — and Porter’s extreme shooting threat is also missing from that equation. Without Thompson, the Warriors only have one all-world shooter, allowing opposing defenses to focus more closely on Curry.

The Warriors’ downturn during Thompson’s absence was frustrating for fans, but in one way it was more helpful to the team’s long-term success than the Nuggets’ position as the West’s sixth seed this season: Golden State picked No. 2 and No. 14 overall in the 2020 and 2021 drafts. Whether James Wiseman and Moses Moody become NBA stars, those picks are more valuable than the No. 20 slot Denver will use this June.

For the immediate future, Thompson is doing his part to keep the Warriors’ title window as open as possible, returning to strong shooting form over the last several weeks, including a season-high 41 points in the last game of the regular season. He’s not the first to return to prominence after a major injury, as Murray cited Zach LaVine and Dejounte Murray as stars who also reached out to him.

If Murray makes a surprise return in the first round, he’ll almost certainly be on a minutes restriction, with low expectations. But by the 2023 playoffs, he could be going toe-to-toe with the same player who offered encouragement two years prior — with both teams in serious contention for the Larry O’Brien Trophy.

Elizabeth Hurley is slammed by fans for holding ‘delicate’ starfish