Land shark? Why more shark encounters are likely coming and how “humans are not on the menu” 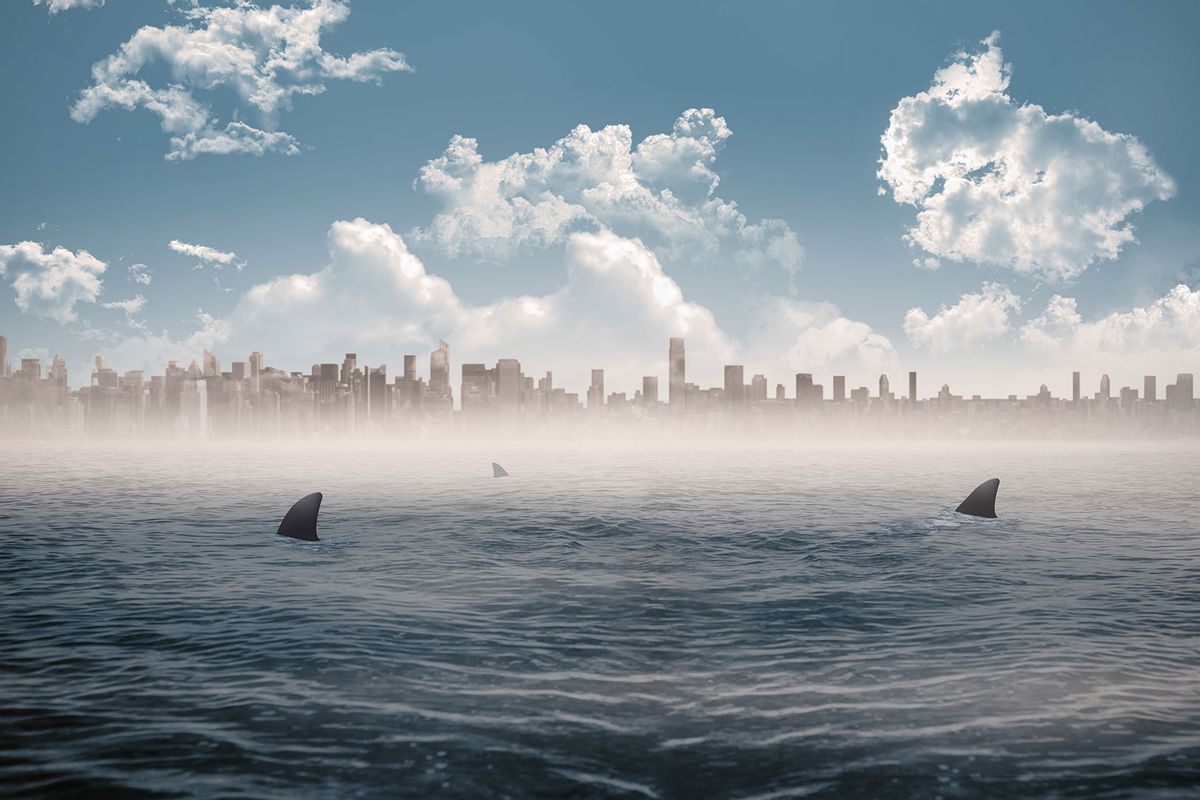 In 1975’s iconic killer shark movie “Jaws,” a New England small town mayor refuses to accept that beachgoers are being attacked by a great white shark. Because he cares more about the local economy than the public welfare, he needlessly endangers innocent people — a failure not unlike that of politicians who refuse to support policies that can address climate change.

In the ultimate sign of karma from the universe, it appears that one of the dangers of climate change might now be more sharks in our human spaces.

Indeed, a recent study in the journal Marine Ecology Progress Series suggests intriguing implications when it comes to the question of how sharks will interact with humans as climate change continues to worsen. If nothing else, it anticipates a world where humans and sharks cross paths more often than is currently the case.

But don’t go envisioning Chevy Chase as “SNL’s” infamous Land Shark or an over-the-top “Sharknado”-esque adventure of people fighting dorsal-finned dangers from the sky. Contrary to popular media portrayals that vilify sharks, humans will not be in that much trouble when this happens. It will instead be a heartbreaking tragedy in which millions of innocent and beautiful fish are the big losers due to human activity beyond their control.

RELATED: Want to confuse a shark? Use a magnet

First, let’s explore why sharks and humans will probably be running into each other more often. One reason comes down to the field of urban ecology and, specifically, how different species respond when they come across a large population of humans. If a species thinks that its members can get along just great with us, they are known as urban exploiters; think of raccoons that raid trash and pigeons that defecate on statues in major cities all over the planet. On the other end of the spectrum there are urban avoiders, or animals that avoid major cities out of self-preservation; large predators like wolves and mountain lions fall into that category.

So where would sharks fall if they’re going to be butting up against humans more often?

The researchers behind the Marine Ecology Progress Series study initially believed that sharks would also be urban avoiders, steering clear of us and our cities. Surprisingly, that’s not the case. After monitoring the behavior of 14 great hammerheads (Sphyrna mokarran), 13 bull sharks (Carcharhinus leucas) and 25 nurse sharks (Ginglymostoma cirratum) that lived off the Miami coast, the scientists learned that “space use patterns of tracked sharks were consistent with that of ‘urban adapters’ (species that exhibit partial use of urban areas).” In addition, there was a mysterious variable that seemed to draw sharks closer toward the Miami metropolitan area.

“I think we should worry actually more for the sharks than for humans … You’ve got chemical pollution, noise pollution, light pollution, over-fishing. What does that mean for the health and survival of these sharks?”

“We propose several hypotheses that could explain our findings, including food provisioning from shore-based activities that could be attracting sharks to urban areas,” the researchers explained. “Ultimately, the lack of avoidance of urban areas by sharks documented here, as compared to terrestrial carnivores, should motivate future research in the growing field of urban ecology.”

In addition, the study also suggests that human-shark encounters may become more common as the Earth continues to warm.

“One thing that climate change will do is put more people in the water,” Dr. Neil Hammerschlag, director of the University of Miami Shark Research and Conservation Program and lead author of the study, told Salon. “When it gets warmer, more people like to go in the ocean, and the kinds of areas more toward the higher latitudes tend to warm at a faster rate than more southern latitudes. So water that was previously maybe too cold for people off New Jersey at certain times of year is actually warming up and are becoming more favorable to people.

“The sharks are always doing what they’re doing, but if you put more humans in the water, you have higher encounter rates,” Hammerschlag added.

Climate scientist Dr. Michael E. Mann told Salon in writing that he is also concerned about how climate change will impact shark populations, and in turn how often those populations encounter humans.

“My understanding is that the main climate change impact is that warm waters extending further north are leading to increased shark populations along the mid-Atlantic Coast and greater interactions” with people who live in areas “like the Carolina coast,” Mann explained. He later added that “all fish species are ultimately imperiled by the warming of ocean water, which leads to lower levels of dissolved oxygen, oxygen that they, like all animal life, require for respiration.”

Is this bad news? It depends on if you have fins or feet. The upshot of these increased interactions will likely favor humans.

While humans have a longstanding phobia against sharks, the reality is that humans have driven sharks to the edge of extinction while shark attacks on people remain quite rare. Humans are not sharks’ preferred prey, and as such the likelihood of increased human-shark interactions poses far more of a threat to sharks than to humans.

“It is estimated that humans kill on the order of 100 million sharks per year … In fatal interactions between humans and sharks, sharks are nearly always the loser.”

“The sharks haven’t changed their behavior recently,” Hammerschlag pointed out when discussing how sharks are less afraid of human cities than previously thought. “What we found is what the sharks have been always doing, which means that humans are not on the menu. Humans are not a natural food item for the sharks. And that’s why a shark bite is really rare.” In fact, the study found that sharks are actually “kind of tolerant of people in the sense that they really have no interest in humans.

“I think we should worry actually more for the sharks than for humans in the sense that there is all of this pollution,” Hammerschalg added. “Think about the threats associated with urbanization to the ocean: You’ve got chemical pollution, noise pollution, light pollution, over-fishing. What does that mean for the health and survival of these sharks?”

Dr. Ken Caldeira, an atmospheric scientist at the Carnegie Institution for Science’s Department of Global Ecology, told Salon by email that he was “hesitant” to reply because he did not want to “stoke irrational fears of sharks” such as those promoted by “Jaws.”

“It is estimated that humans kill on the order of 100 million sharks per year,” Caldeira explained. “In contrast, there were 440 fatal unprovoked shark attacks recorded worldwide in the 60-year period from 1958 to 2018. In fatal interactions between humans and sharks, sharks are nearly always the loser.”

Caldeira was not the only scientist to use the word “lose” when describing how both sharks and humans will fare if current conditions persist.

“Global warming is increasing marine heat waves with several documented cases of increased mortality of sharks and other species,” Dr. Kevin E Trenberth, a distinguished scholar at the National Center for Atmospheric Research, told Salon by email. “Indeed the whole food chain is affected so that it is not a direct effect on sharks but rather the loss of their food supply. Some migration may occur, but some of the documented losses are scary for the health of the ocean.”

For more Salon articles about sharks:

Hugh McElhenny dies; Hall of Fame running back was 93