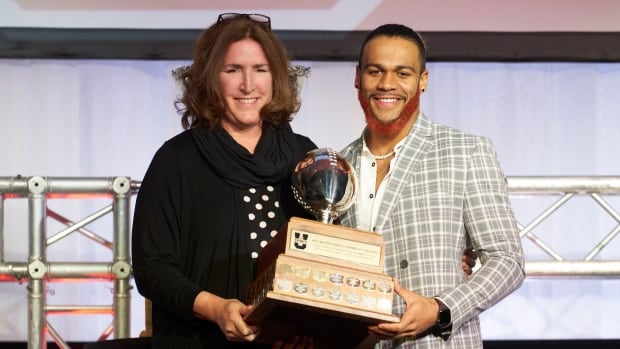 Laval Rouge et Or receiver Kevin Mital was named the winner of the Hec Crighton Trophy as the most outstanding player in U Sports football at the annual Vanier Cup all-Canadian awards banquet on Thursday.

Mital led the country in receptions (58) and receiving yards (751) in eight regular-season contests. His 12 touchdown receptions were a school record and tied the conference record held by Rob Harrod of Ottawa (1998) and Alexander Fox of Bishop’s (2013).

The St-Hubert, Que., native became the first receiver to win the award since Western’s Andy Fantuz in 2005 and the first winner from Laval since Benoit Groulx in 2008.

Montreal Carabins linebacker Nicky Farinaccio claimed the Presidents’ Trophy as the standup defensive player of the year, having led the country with 10.5 sacks, just 2.5 short of the national single-season record.

St. Francis Xavier X-Men head coach Gary Waterman grabbed his first Frank Tindall Trophy as coach of the year after leading his squad to an 8-0 regular-season record and second straight Loney Bowl title in the AUS.

After falling behind in the first half Laval held Western to just three points in the second and secured their spot in the Vanier Cup.

The Vanier Cup matchup between Laval and the Saskatchewan Huskies, Canada’s university football championship — will take place at Western Alumni Stadium next Saturday at 1 p.m. ET. Watch live coverage on CBC-TV, CBCSports.ca, CBC Gem and the CBC Sports app for iOS and Android.

WATCH | How the ‘Miracle’ U of T Blues became Vanier Cup champions:

The 1993 University of Toronto Varsity Blues football program was left for dead, 11 months later they were Vanier Cup champions.

Mother of officer Brian Sicknick who died in Capitol riot…