LEADING OFF: Astros vs Yanks, Musgrove returns to face Phils 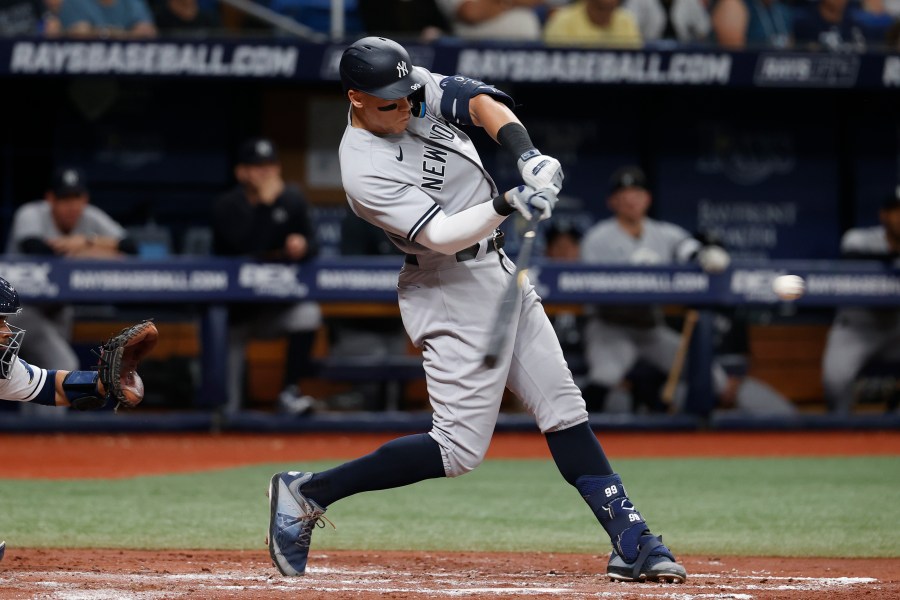 A look at what’s happening around the majors today:

BATTLE IN THE BRONX

American League powerhouses square off when Aaron Judge and the New York Yankees host Yordan Álvarez and the Houston Astros in the opener of a highly anticipated four-game series.

New York (51-18) boasts the best record in the majors, and Houston (43-25) is second to the Yankees in the AL standings. Both clubs already hold double-digit division leads, so this matchup could certainly serve as another playoff preview come October.

Still seething over ALCS losses to Houston in 2017 and 2019, Yankees fans are sure to boo and jeer the Astros again for their 2017-18 cheating scandal.

Judge leads the big leagues with 27 home runs after hitting a pair in Wednesday night’s comeback victory at Tampa Bay. Álvarez is tied for second with 21 after launching three in a two-game sweep of the New York Mets at home.

Álvarez has nine homers in his last 20 games.

“Whenever a player goes to New York and plays there, it’s just really exciting with the history of that team and the ballpark,” he said through a translator. “We know they’re a really good team so we’re just going to compete and try to win.”

Joe Musgrove (8-0, 1.59 ERA) comes off the COVID-19 injured list to start for the San Diego Padres against Bryce Harper and the visiting Phillies. Musgrove went on the IL last Friday after he tested positive.

Ranger Suarez (5-4, 4.43) pitches for Philadelphia in the opener of a four-game series.

Kyle Schwarber has reached base in 26 consecutive games for the Phillies. But they’ve lost three in a row after winning 14 of their first 16 under interim manager Rob Thomson, who took over when Joe Girardi was fired. Harper returned to the lineup Wednesday at Texas after missing three games with an infected blister on his left index finger.

San Diego swept a three-game series from Arizona without All-Star slugger Manny Machado, who sprained his left ankle last weekend. The team doesn’t think Machado will need to go on the injured list.

Padres manager Bob Melvin returned to the dugout Wednesday after missing 11 games while in COVID-19 protocols.

José Ramírez and the red-hot Cleveland Guardians go for a three-game sweep at Minnesota that would give them a two-game lead in the AL Central over the Twins.

The young Guardians rallied for four runs in the ninth inning Wednesday night to stun Minnesota 11-10. Cleveland has won seven straight series and is 17-4 since May 30.

“I feel we’re a special team,” shortstop Amed Rosario said through a translator.

Nolan Arenado and the Cardinals have a one-game lead in the NL Central over the Brewers heading into the finale of their four-game series in Milwaukee.

Over the last two games, St. Louis relievers have permitted just one hit and three walks while pitching 10 1/3 scoreless innings.

“There’s some incredible arms down there,” Cardinals starter Adam Wainwright said. “We like our spot when we get to them.”

Freddie Freeman has seven RBIs in the first two games of the series at last-place Cincinnati, which has dropped six straight overall and eight in a row over two seasons to the Dodgers at Great American Ball Park.

After watching three players exit early, the White Sox are a bit banged up going into their series opener at home against Baltimore.

Chicago outfielder Luis Robert extended his hitting streak to 13 games Wednesday in a 9-5 loss to Toronto. But he slowly ran to first and stayed there when his hit skipped past left fielder Lourdes Gurriel Jr. and eventually left the game in the eighth.

“When he doesn’t go (after) balls to the wall, he doesn’t go to second, you know he’s feeling some ouchies there,” Chicago manager Tony La Russa said.

White Sox infielder Danny Mendick left because of discomfort in his right knee after colliding with outfielder Adam Haseley on a foul pop. Right fielder Adam Engel exited because of right hamstring soreness.

Star shortstop Tim Anderson, who returned Monday after missing 18 games because of a right groin strain, didn’t play under doctor’s orders, La Russa said. And first baseman Jose Abreu was relegated to designated hitter duties because of a hip issue.

Veteran outfielder Lorenzo Cain has cleared waivers and become a free agent — at 36, it’s uncertain whether he hopes to play again.

Cain was batting .179 with one homer and nine RBIs in 43 games when he was released by the Brewers. He’s in the last season of a five-year, $80 million contract.

The two-time All-Star and Gold Glove winner was designated for assignment Saturday. That was the day he reached 10 years of major league service, enabling him to be fully vested in the players’ pension fund.

“It just got to a point where it’s probably time,” Cain said after Milwaukee made the roster move. “I haven’t been performing like I would’ve liked, but the situation is what it is. I’ve had a great career. I can’t really be upset about anything, but, yeah, it’s time.”

Six players yet to prove themselves

Which teams have won the Champions League? Full list of previous winners | Football