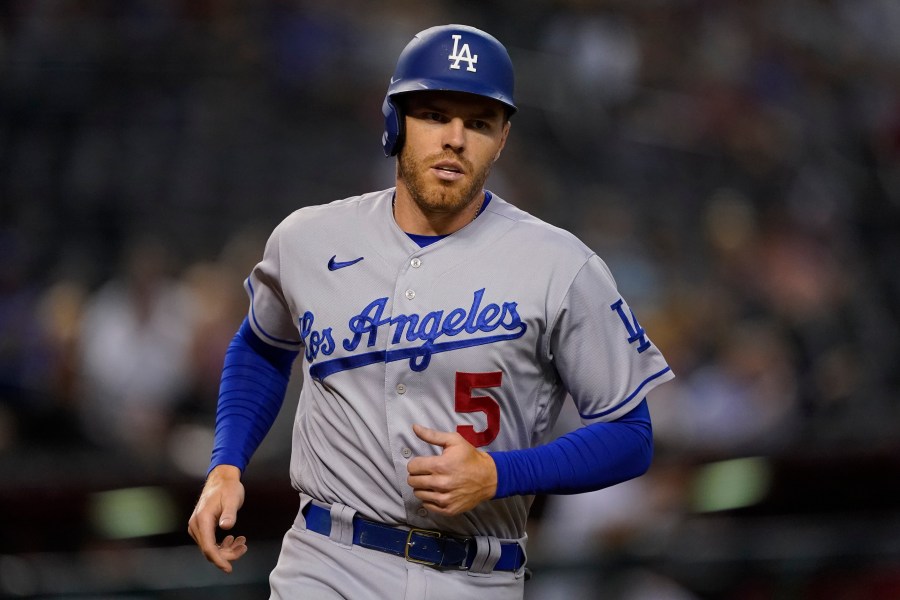 A look at what’s happening around the majors today:

Freddie Freeman is sure to get a huge ovation when he returns to Truist Park for the first time since helping lead the Atlanta Braves to the World Series championship.

Now with the Los Angeles Dodgers, the star first baseman and the NL West leaders open a weekend series at his former home.

Freeman was the longtime beloved face of the Braves franchise. After a dozen years in Atlanta, he became a free agent and signed a $162 million, six-year deal with the Dodgers.

“I haven’t really thought about it yet,” he said after the victory. “Just looking forward to getting home and seeing my family. They’ve been in Atlanta for a couple days. I’ve been asked a couple times, and I just kind of say no, not (talking) right now. All I care about is getting home to my family. Tomorrow you can ask me those questions, and I’ll see what kind of emotions I have going on tomorrow.”

The last time Joc Pederson of the Giants and Tommy Pham of the Reds were on the field together, it didn’t go so good. That was three weeks ago in Cincinnati when Pham slapped Pederson in the face before a game because of a dispute over fantasy football.

Pham was suspended for three games by Major League Baseball.

The outfielders will see each other again when the Reds visit San Francisco for a weekend series. Pederson said he hopes Giants fans don’t take it too far when Pham is playing at Oracle Park.

“It’s an unfortunate incident, and I feel like we’ve moved past it,” Pederson said. “It was an off-field issue, handled and moved on. It’s in the rear-view mirror.”

Pederson added he’s had no contact with Pham since the incident.

Cincinnati has lost seven in a row.

Mike Trout absolutely hammered the Mariners last weekend and now gets to face them again when the Los Angeles Angels host Seattle.

Trout is fresh from hitting five home runs in a five-game series at Seattle. He’s hit 52 homers in his career off the Mariners, matching Rafael Palmeiro for the most by anyone against them.

The three-time AL MVP didn’t play Wednesday and the Angels were off Thursday, so he should be well rested.

Also back from a day off will be Shohei Ohtani, the two-way star who put on a pair of dazzling performances for the Angels this week.

On Tuesday night, Ohtani hit a pair of three-run homers and drove in a career-high eight runs, the most by a Japanese-born player in the major leagues. On Wednesday night, he struck out a career-best 13 while pitching eight scoreless innings of two-hit ball against Kansas City.

Astros ace Justin Verlander (8-3, 2.30 ERA) pitches at Yankee Stadium for the first time since Game 5 of the 2019 AL Championship Series, a 4-1 Houston loss.

Verlander is 3-4 with a 4.02 ERA in 10 career starts at the park, but he’s had some high moments, too. In 2018, the two-time Cy Young Award winner pitched one-run ball into the seventh, then sarcastically tipped his cap to booing fans.

Verlander will face New York righty Luis Severino (4-1, 3.27) on the second night of a four-game set between the AL East-leading Yanks and AL West-leading Astros.

A pair of surging teams that Terry Francona has managed meet up at Progressive Field when the Boston Red Sox play Cleveland.

Rafael Devers, J.D. Martinez and the Red Sox have won eight of 10 to move a season-high eight games over .500. The Guardians lead the AL Central, boosted by their 17-5 stretch.

Francona won two World Series championships while managing the Red Sox, including the 2004 victory that ended the team’s 86-year drought. Cleveland hasn’t won the crown since 1948.