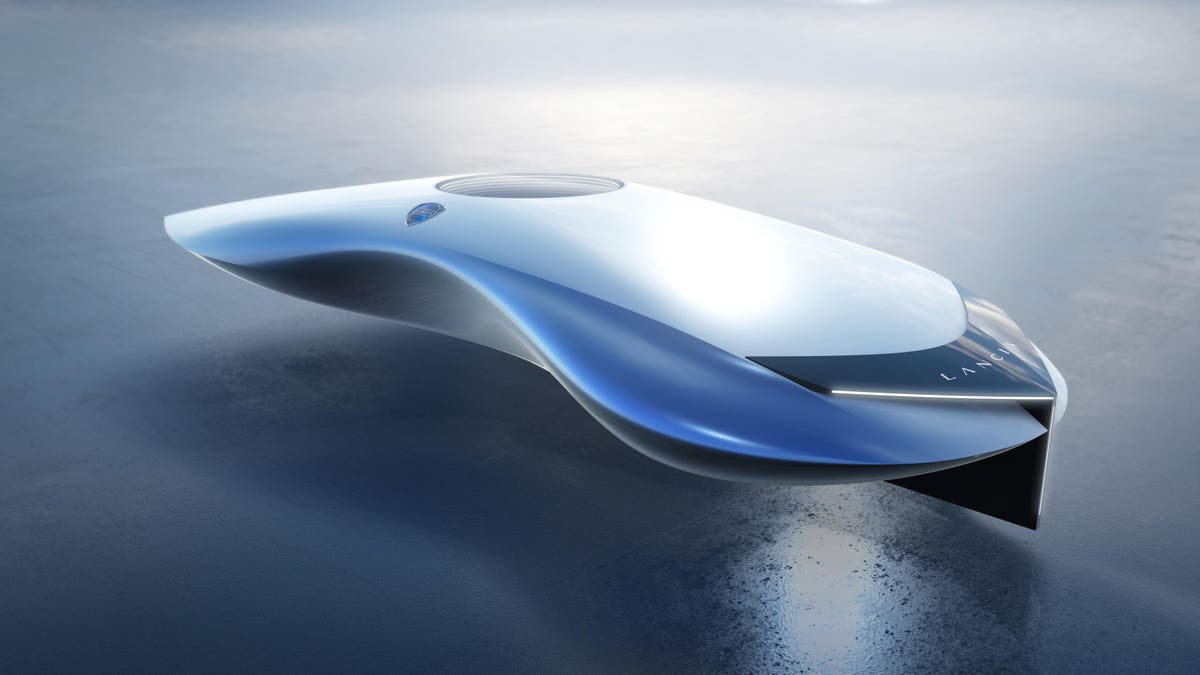 Near-moribund Italian car company Lancia has been spurred by new owners Stellantis to join the electric-car rush with three new EVs for Europe by 2028.

Lancia showed a piece of floating art at its Design Day this week, revealing a modern interpretation of its T-shaped grille, and circular lights inspired by its rallying legend, the Lancia Stratos.

Lancia CEO Luca Napolitano said the concept car without wheels was a new era that showed the brand’s next 100 years.

Within the next six years, though, the Lancia sculpture’s design language will be a redesigned Ypsilon hatchback, a reborn Delta and a flagship that has yet to be named.

It’s not the first time a car company has thrown out a sculpture as the basis for its future design direction, with Mercedes-Benz teasing its Aesthetics S concept car at the Detroit Auto Show back in 2012.

“It is timeless, durable, unique. Our designs will be built with iconic and pure shapes like the circle, square and triangle,” Lancia head designer Jean-Pierre Ploué said.

The rear end design of the sculpture will find its way onto the first Lancia EV, which will replace the Ypsilon in 2024.

It will initially be sold in four countries, including Italy, France, Germany and the UK (so it will be produced in right-hand drive) and then across the rest of Europe.

“We want to make Lancia a respected brand within the European premium market,” Napolitano said.

“Today is the beginning of our renaissance that will amaze Lancia fans all over the world.

“Lancia will once again be a desirable, respected and reliable brand in the European premium market. Today is the beginning of the new Lancia.”

The new Ypsilon will sit on the Stellantis STLA (small electric vehicle) architecture, which is already underneath the Peugeot e-208 and the Opel Corsa Electric, and will also be the basis of Alfa Romeo’s first EV in 2024.

Lancia’s design department has been incredibly underemployed for the last decade, with the former Italian innovation powerhouse’s sales world shrinking from a global market to Europe and now, for the last five years, it has only been sold in Italy.

And even then, it has only been sold in Italy with just one model: the Ypsilon hatchback, which was launched in 2011 and facelifted in 2015.

But the creation of Stellantis, from the merger of PSA (Peugeot, Citroen, DS, Opel) and FCA (Fiat, Lancia, Maserati, Alfa Romeo, Chrysler, Jeep, RAM, Abarth) gave Lancia a new energy – and a rare chance at survival.

Lancia was founded in 1906, and it still holds more World Rally Championship manufacturer’s crowns (10) than any other carmaker, despite not even competing since 1993.

It won titles with the Lancia Fulvia, the Ferrari-engined Stratos, the 037 Rallye, the Delta HF and the Delta HF Integrale.

Its D50 was rebadged as a Ferrari to take Juan Manuel Fangio to the 1956 Formula One world title, and it also won the 1980 and 1981 World Sportscar championships against the might of Porsche.