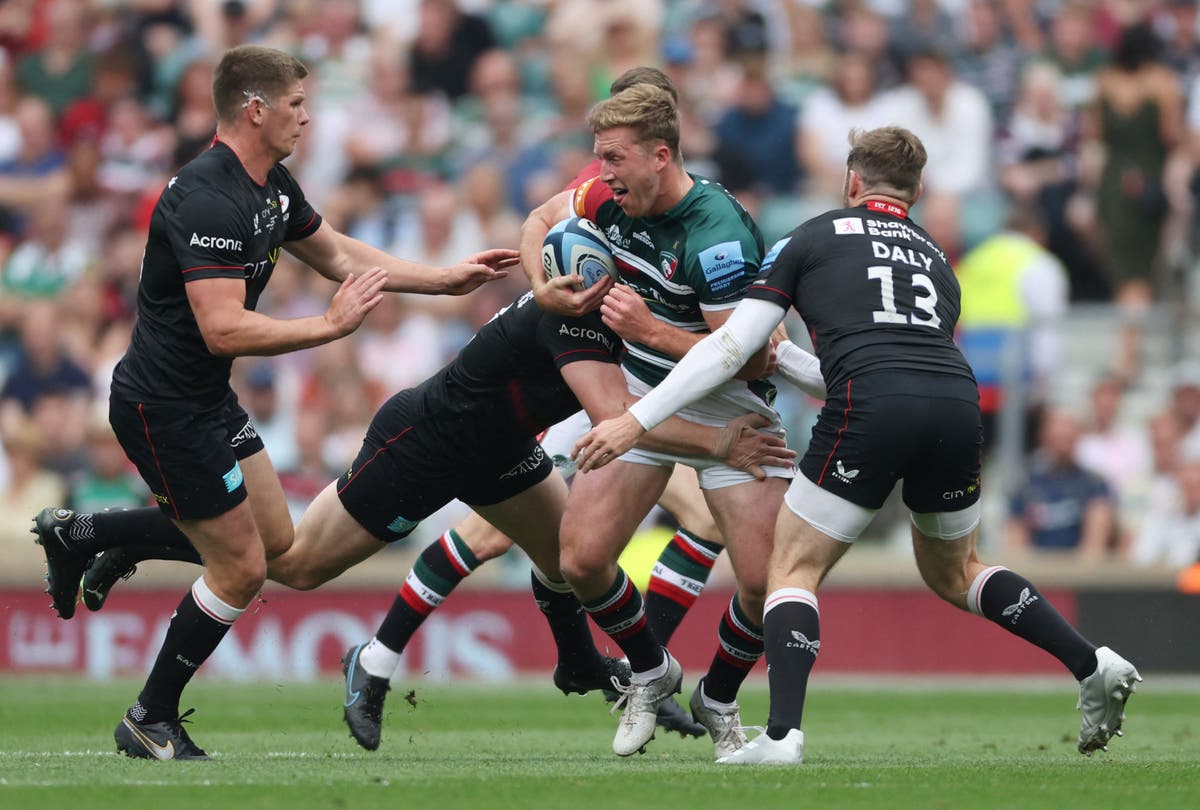 Leicester Tigers take on Saracens as the two most decorated sides in English rugby union this century go head to head at Twickenham to be crowned Gallagher Premiership champions.

It has been a long journey for Leicester, nine years after they last reached the final having lost a series of semi-finals in the interim. But under Steve Borthwick they have improved dramatically over the past two years and finished the league season on top of the pile with 20 wins from 24 games.

They take on Saracens, who returned from the Championship – where they were sent for salary cap breaches – and bounced straight back into contention at the top of the Premiership. Owen Farrell is in fine form, and his fly-half battle with England teammate and long-time friend George Ford will be at the heart of this match.

“Owen is a guy who will turn up as the Saracens talisman. He is brilliant and it’s an exciting challenge to come up against one of the best flyhalves in the world,” England full-back Freddie Steward said this week. “George is incredible, one of those players you appreciate more when you play with him. The time he creates for others and how he puts them into space, he’s magical.”

Follow the latest score and all the action from the Premiership final below.

Let’s run you through some key moments of that first half at Twickenham, starting with the injury that forced George Ford off injured in his final game for Leicester.

Not what the England fly-half deserved

Only twice in Premiership Rugby final history have teams come from behind at half-time to win. That was Wasps 18 years ago and Saracens 6 years ago.

Sarries will fancy their chances of turning this round and adding a third occasion to that list. They’re only one score behind at the break

One final attacking opportunity for Saracens as they try a few phases around halfway but the ball is knocked on and that’s half-time.

Hanro Liebenberg and Jasper Wiese tries have Leicester on top at Twickenham but Saracens are still within a score. A compelling 40 minutes with all to play for after the break.

Back to 15 men and Saracens back on the attack. Gorgeous offload from the floor by Farrell, before a couple of phases later, Farrell dinks a grubber ball that looks to have Steward in all sorts of trouble on his own line.

Somehow the England full-back powers forward from almost behind the line to around ten metres out and then wins the penalty at the breakdown, allowing Leicester to clear. Incredible escapology from Steward.

A tough conversion for Freddie Burns from relatively wide on the right and he puts it wide. Just the five-point score for Tigers.

First scrum collapses, as does the second and it’s a penalty to Tigers, against loosehead prop Mako Vunipola for collapsing.

Tap and go penalty from Genge, he gets inches out and the ball is popped to Jasper Wiese on crash ball and HE’S OVER!

Chaos at Twickenham! Wigglesworth charges down Farrell’s kick and Ashton seizes on the loose ball. He tries the little kick inside that almost falls to Moroni but Sarries scramble back, Farrell manages to get his hands on the ball and he’s tackled behind his own line.

So close to a try but still a five-metre scrum for Leicester. Can they convert this into points?

Saracens win a penalty on halfway and the bigger boot of Elliot Daly gets the nod to go from the tee from 49m. The England international has the distance and it’s just inside the right post. The deficit is reduced to a single point by 14-man Sarries.

Freddie Burns adds the conversion and Tigers make the most of their man advantage to take the lead with the game’s first try!

Can hot weather cause diarrhoea?