Live Like The Medici In This Spectacular Tuscan Hotel Near Florence 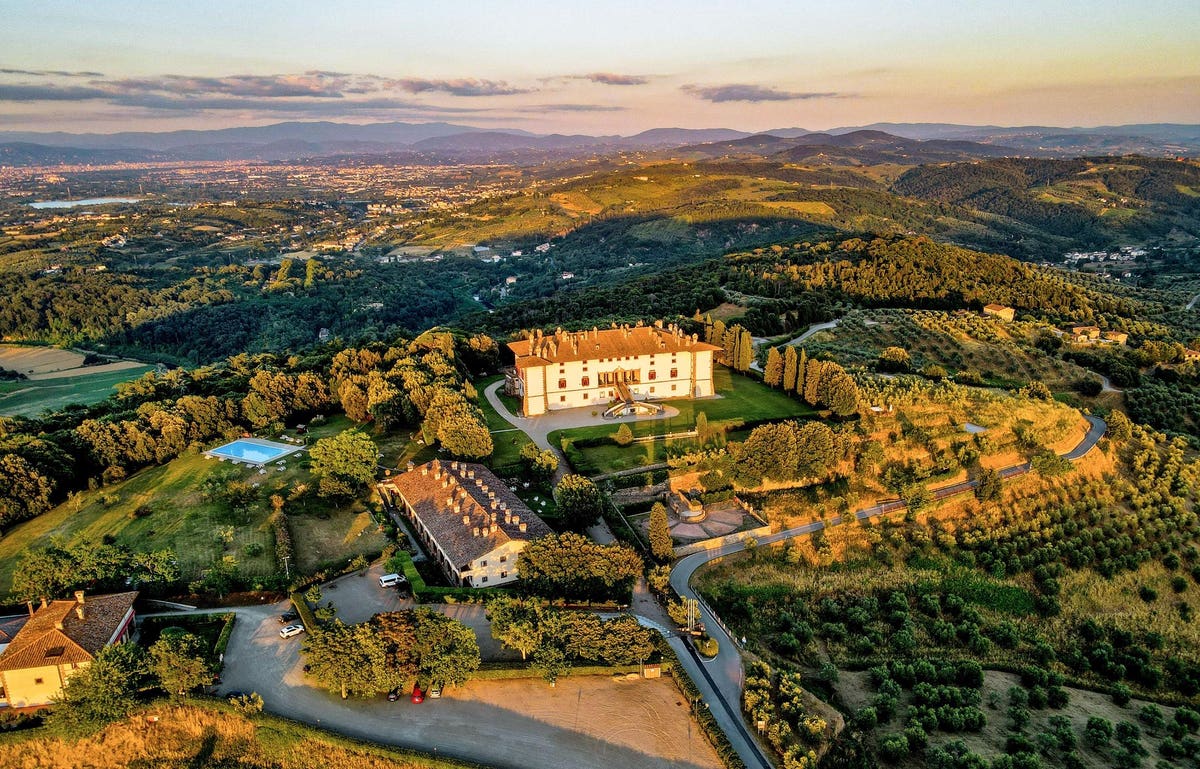 Driving out of the city of Florence, the monumental white villa, 20 km away, is already visible in the distant verdant hills. Surrounded by shady trees, the fortress-like main house and the neighboring arcaded stables were once the property of the powerful Renaissance Medici family. Now, over four centuries later, Tenuta di Artiminio continues to flourish under Meliá Hotels, which recently acquired the hotel and nearby apartments for their Meliá Collection portfolio.

Sitting in the shadow of the Medici’s 16th-century hunting lodge, the rooms of the hotel are spread out throughout an elegant 17th-century structure that was once the stables and servants’ quarters. From the arcaded walkway running around the upper floor is a vista of the undulating Tuscan hills and the vast white facade of Villa Medicea La Ferdinanda. Built in 1596 by order of Ferdinando I de Medici, Grand Duke of Tuscany, the villa, replete with frescoes and sculptures, has been a UNESCO World Heritage Site since 2013.

This architectural setting, all carefully restored, immerses guests in a Renaissance oasis. The wooden-beamed rooms of the hotel have pleasing details like stone coats of arms under the imposing mantlepieces or carved stone sinks. Grand armchairs and heavy wooden desks all hark back to the estate’s origins. The hotel also offers guests an outdoor swimming pool, spa, gardens and event spaces.

In the nearby medieval village, visible from the villa’s terrace and just a few minutes’ walk away, Meliá is also opening several apartments and rooms in the historic houses. The village of Borgo Artiminio is, like the villa, steeped in history, with an Etruscan museum attesting to its ancient origins.

For guests, a stay at Tenuta di Artiminio also gives a taster of the splendors of noble Medici country living. Breakfast and dinner are served in Biagio Pignatta, once the house of Ferdinando’s homonymous butler and just a few steps from the hotel. Around the walls are copper pots and historic cooking utensils. From the windows of the conservatory, diners can marvel at the Tuscan countryside peppered with vineyards and olive groves.

At Biagio Pignatta, guests can experience the sumptuous cuisine favored by the Medici. Chef Michela Bottasso is an avid researcher of the historic dishes of the Renaissance family and recreates many on her menu. She proudly offers up plates like duck à l’orange and onion soup whose fame in France, she explains, is all thanks to Italian-born Catherine de Medici who imported the recipes when she married King Henry II and became Queen of France.

Guests can also try gourmet Tuscan fare and specialties like ribollita soup made in the particular local Carmignano style. The dishes are accompanied by the estate’s own wines, including a full-bodied DOCG Carmignano and an aromatic vin santo to pair with dessert.

Guests can fill their days sampling traditional pursuits like truffle hunting with specially trained dogs, wine tastings with the estate’s sommelier, a cooking class with Chef Bottasso or a visit to the honey atelier with the resident beekeeper.

While the villa is sometimes taken over by weddings, guests often get the chance to take a guided tour of the historic building. The cavernous rooms are adorned with frescos by Renaissance master Domenico Passignano while in the kitchens downstairs there is a roasting contraption designed by Leonardo da Vinci.

Dubbed the villa of a hundred chimneys, the period property is one of the few built by the Medici to have survived relatively unmodified since the 16th century. Indeed, even the ghost of Ferdinando himself hasn’t been evicted.

For another historic house experience, try Meliá’s Rome hotel, Villa Agrippina. The five-star resort is housed in a former palace and located near the Vatican Museums and Sistine Chapel.

A Complete Guide To The Art, Parties, And Events At Art Basel Miami Beach 20th…