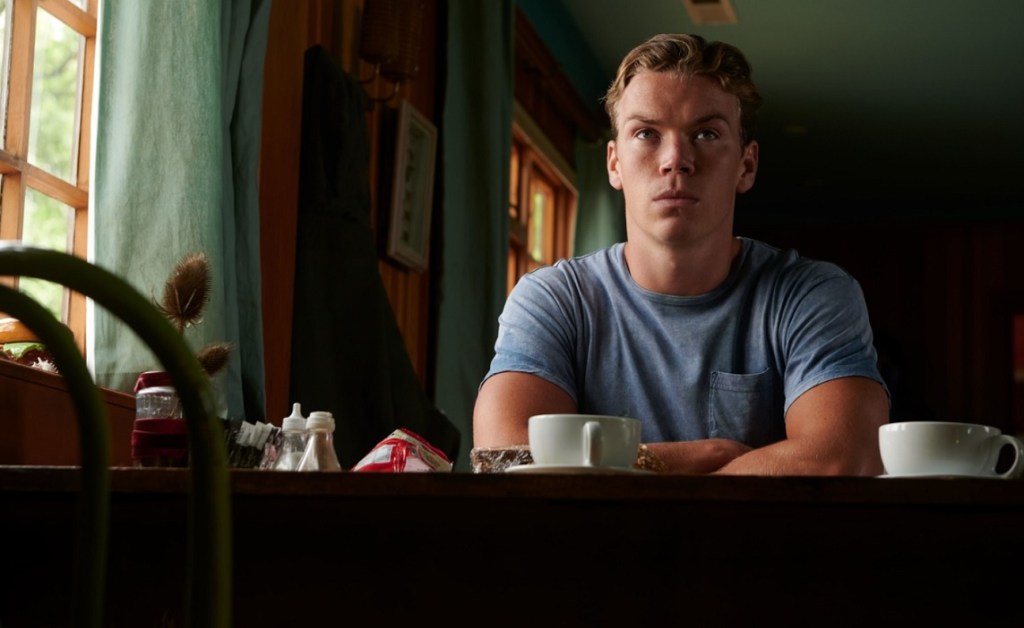 Not Rated. On VOD.

Imagine a film noir musical with a book by English playwright Harold Pinter, and you will have some idea of the uniqueness of “The Score.” It’s written and directed by Malachi Smyth with songs composed by Johannesburg-born Johnny Flynn, who plays David Bowie in the biographical film “Stardust.”

In “The Score,” Flynn costars as Mikey, a hirsute tough guy with a pile of cash retrieved from its woodsy hiding place by Troy (Will Poulter), the younger brother of the man who went to prison for stealing it and who is Mikey’s best friend. Mike and Troy are scheduled to meet some other tough guys to divide the cash. Troy is a boxer, who likes to play with the meanings of words. He points out to Mike, for example, that the word “score” has connotations that are sexual, musical and criminal. They wait in the Halfway Cafe, where they meet a staff person named Gloria (Naomi Ackie, “Lady Macbeth”). Somewhere in England’s lush countryside (the film was shot in Essex and Hertfordshire in the east of England), the action unfolds, and all of a sudden you get used to the characters breaking out in songs. The songs are romantic and full of water imagery and make the most sense when Troy, who boasts of getting an A in Shakespeare, and Gloria begin a tender courtship.

It doesn’t matter that the cafe has very few customers, one of them a photographer (Lucian Msamati), who wants to take Troy’s photo to “make him immortal.” We understand the limits of this sort of indie film-making. “The Score” has only four principal parts, and one location, if you don’t count the nearby woods. Troy and Gloria sing of burning to one another. Mike broods angrily.

Flynn, who looks like Charlie Hunnam’s kid brother, gives the bearded Mikey a simmering bile that you know is going to explode unpleasantly. The boyish and likable Troy (it’s odd hearing London-born Poulter actually speak and sing with an English accent) begins to size up as this grim tale’s patsy. What Smyth manages to get out of the choreography of a pair of outdoor swings is impressive. The flirtatious dialogue exchanged by Ackie and Poulter is quite clever and sweet. In an early scene we see Mike giving a gun to his moll (Lydia Wilson). We know we’re going to see that gun, again.

Gloria seems upset while on the phone. A car arrives, and we learn something about Gloria we didn’t expect. Yes, the courtship reminds us a bit of “Romeo and Juliet,” speaking of Shakespeare. Troy tells Gloria of his dream of using his cut to buy a sailboat and travel to Spain, Greece and Italy. They mime sailing in a small boat outside the cafe. The gal in the leopard skin coat is probably dangerous. The songs, some of which are delivered in a singsong style, may not be individually memorable. But they give “The Score” a romantic, beating heart that undeniably captivates. “The Score” tells an eternal tale of love, crime and violence with songs about burning, the sea and a river. It ends aptly enough with one last meaning of the word “score.” The film scores, too.

(“The Score” contains profanity and violence)

Last chance to ‘fly your name around the moon’

The Gear That Helped Me Travel The World Without Ever…