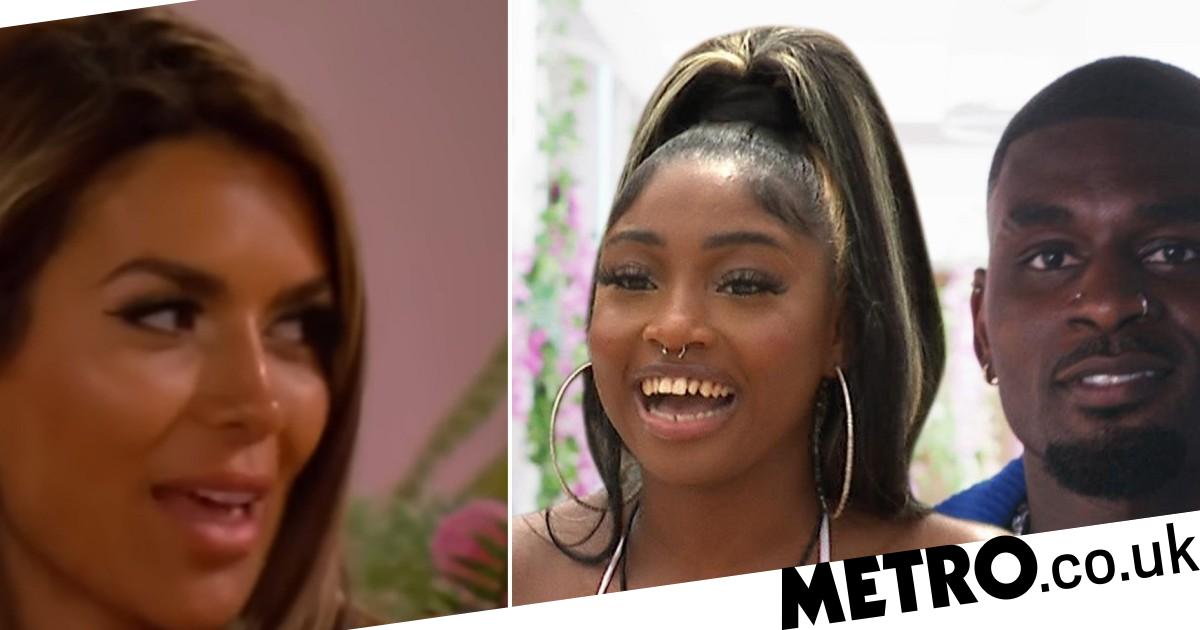 Well, it was only going to be a matter of time before we saw fireworks in the Love Island 2022 villa, and we have Ekin-Su Cülcüloğlu and Amber Beckford to thank for the latest serving of drama.

Accusing a fellow Islander of ‘playing a game’ never goes down well, or in any reality TV show, so it was no surprise that Ekin-Su and Amber clashed in Monday night’s episode.

As the other girls watched on awkwardly, the two battled it out (verbally), with Ekin-Su claiming that Amber isn’t ‘secure’ in her relationship with Dami Hope.

To be fair, it was Jay Younger who set the cat amongst the pigeons when he discussed Ekin-Su’s bond with the other girls in the villa, telling the Turkish actress: ‘I won’t lie, I am sensing a bit of friction between you and Amber, I can just sense it.’

After Jay’s comment continued to play on her mind, she pulled Amber to one side to settle the score, and while Amber told Ekin-Su that she’s noticed a ‘vulnerable’ and ‘genuine’ side to her, she’s also been questioning whether Ekin-Su’s intentions are genuine.

It’s safe to say we lived for the beef because, while it’s nice to see everyone getting along, well, reality telly just isn’t the same, is it?

What followed was Ekin-Su asking Amber: ‘What’s your actual issue with me? All you’re saying doesn’t make sense.’

With Amber replying: ‘You’re playing a bit of a game, enjoying the drama.’

It wasn’t long before Gemma Owen chimed in, clearly on Amber’s side, stating that ‘the other girls’ had also noticed a difference in behaviour, and Ekin-Su appeared ‘calculating’ – yikes.

Not so keen to be on the receiving end of Ekin-Su’s honesty, the other girls quickly put their heads down, as the actress told the cameras that she felt ‘upset’ after being ‘personally attacked.’

‘No one should have to apologise for who they are,’ she said later on.

Amber and Ekin-Su cleared the air the next morning, apologising for their remarks and taking back any hurt they may have caused… we shall see how long the calm lasts.

But, tonight’s episode wasn’t all one big slanging match, as there was some frisky action too – it very much felt like Love Island as we know and love it!

The ITV show recently turned up the heat when the gals took part in a sexy pole dancing challenge, but now we’ve progressed to something even more filthy – Lip Service.

This challenge divided the Islanders into couples who competed to transport liquid from one side of a dance-floor to another, the catch being that they could only use their mouths.

If certain people in the villa weren’t close before, well, they will be now, as they had no choice but to get up close and personal and spit in each other’s mouths (don’t watch it on ITV Hub with your nan).

Danica Taylor and Luca Bish emerged victorious and got to enjoy a cocktail sesh as their prize.

Elsewhere, it was sad times for Indiyah and Ikenna, who decided romance wasn’t the direction they were heading in and they are better off as friends, while Indiyah and Dami decided there was a ‘spark’ between them.

Paige had her first kiss with Jacques and she was giggling like a schoolgirl – it was adorable.

Oh, and we learnt that Amber’s least favourite smell is processed bread.

The show ended with a major cliffhanger following the public’s vote to save their favourite stars.

Ikenna, Jay and Andrew are the three boys with the fewest votes, while Tasha, Amber and Ekin-Su are at risk out of the girls.

One thing’s for sure, we’re going to feel every second of the next 24 hours as we wait to find out who’ll be dumped from the villa.

Love Island continues each night at 9pm on ITV2.