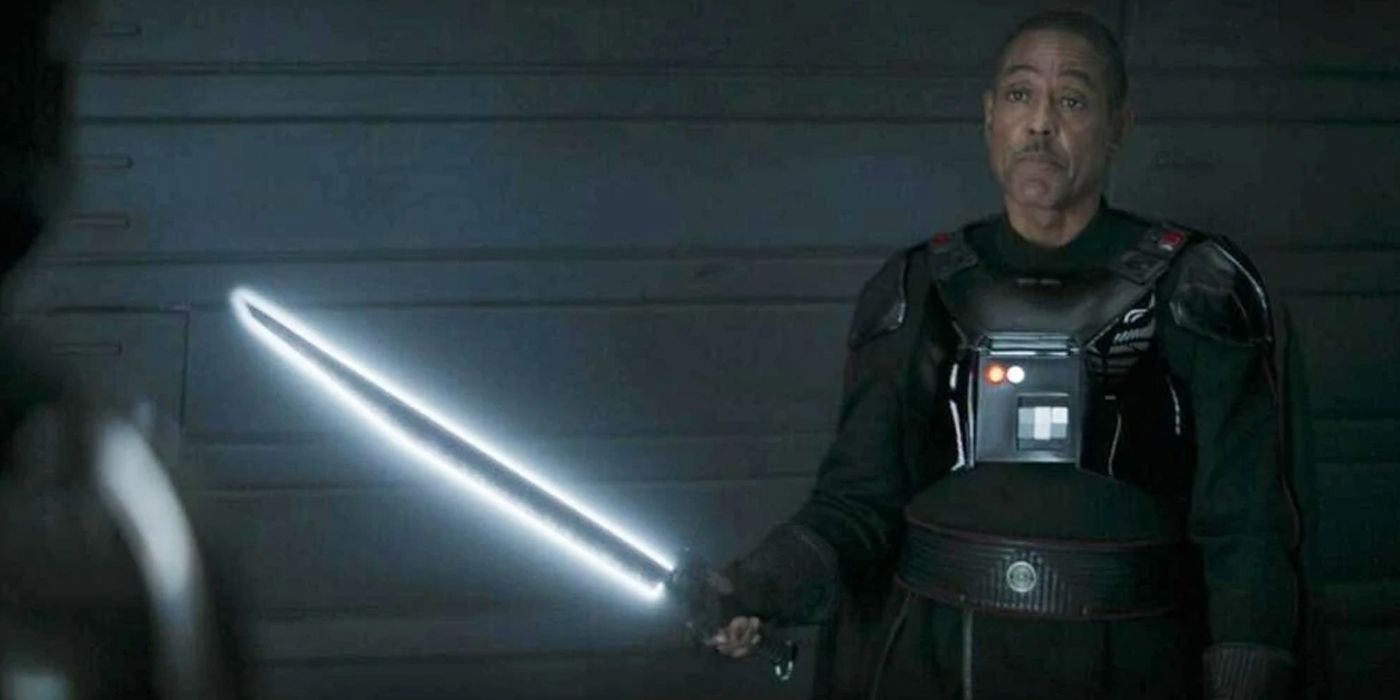 Giancarlo Esposito, who plays the terrifying Moff Gideon in The Mandalorian, was photographed cuddling a human Baby Yoda at Star Wars Celebration.

Moff Gideon is the ominous villain of The Mandalorian, cold-hearted and hellbent on capturing Grogu, the adorable alien that fans dubbed Baby Yoda. Gideon’s actor Giancarlo Esposito, on the other hand, is apparently a lot softer when it comes to cute babies.

On his Twitter, Esposito shared a pair of photographs of himself at Star Wars Celebration in Anaheim, holding and cooing at a baby dressed for the occasion in a Grogu hat with pointy green ears. “I finally caught up to my #BabyYoda!” Esposito captioned the pictures, making a lighthearted reference to his character’s sinister reputation by adding, “To my chagrin, he melted my heart!” The baby’s identity and parents aren’t known, but Star Wars fans standing in the background are clearly enjoying the rare sight of Moff Gideon having some gentle fun.

Esposito first acquired a reputation for playing terrifying bad guys through his portrayal of Gus Fring, a merciless drug lord, in the hit drama series Breaking Bad and its prequel Better Call Saul. His intimidating screen presence not only led him to the role of Moff Gideon in 2019, but also to a part in a very different series, Prime Video’s The Boys. As Stan Edgar, the head of Vought International, Esposito again embodied the calculating, dangerous villain role that has become his trademark.

Season 3 of The Mandalorian is now in post-production and is currently slated to premiere on Disney+ in early 2023. The first footage from the new season was revealed at Star Wars Celebration, giving fans a sign of where Grogu will be heading next. While the show’s Season 2 finale, “Chapter 16: The Rescue,” saw Din “Mando” Djarin (Pedro Pascal) part ways with his young charge, the two were reunited during the events of the spinoff series The Book of Boba Fett. Mando will be charting a course for Mandalore, apparently to face the consequences of removing his helmet and allowing others to see his face.

RELATED: Star Wars: The Idea Behind The Mandalorian Reinforces the Franchise’s Core Thesis

In addition to the Mandalorian himself, the new footage features the return of characters like Greef Karga (Carl Weathers), Peli Motto (Amy Sedaris) and Bo-Katan Kryze (Katee Sackhoff). Whether Moff Gideon is still on Grogu’s trail in Season 3 or if he gets his heart melted just like his actor did, it’s a sure bet that Baby Yoda will again be faced with all kinds of adventure and danger, and that Mando will be there to protect him no matter what.

Mira Jacobs was bitten by a radioactive Oxford comma which transformed her into a writer and junior news editor for CBR. She lives in Colorado with a man and a dog and a cat and a bird and a miniature void with eyes.
If you choose to, you can drop her a note at [email protected]

As the cost of living soars, a week of watching the pennies disappear fast was so dispiriting